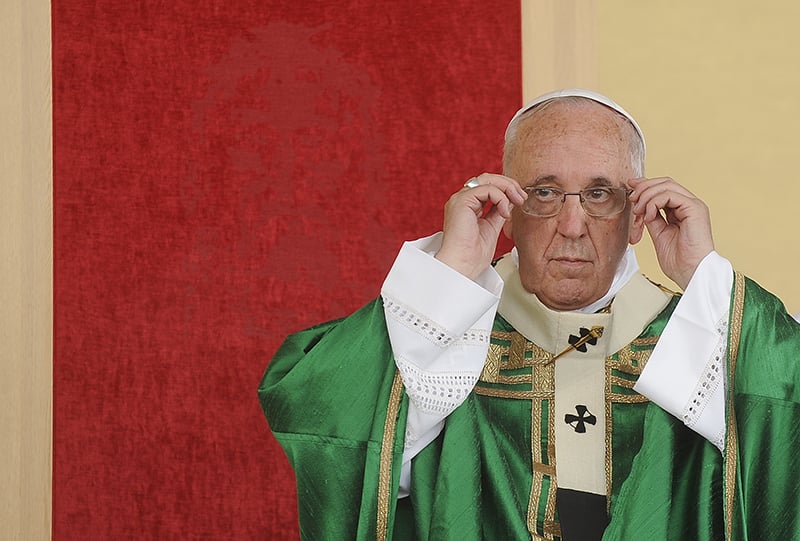 Pope Francis adjusts his glasses in front of his chair, which has an image of the Shroud of Turin woven into the red fabric, as he leads a Mass during a two-day pastoral visit in Turin, Italy, on June 21, 2015. Photo courtesy of REUTERS/Giorgio Perottino
September 3, 2015
David Gibson

(RNS) The "pope of surprises" can't seem to let a news cycle pass without making a headline.

Francis' latest celebrity moment? He went shopping for new eyeglasses in downtown Rome on Thursday (Sept. 3), stunning tourists and passers-by who got the selfie of a lifetime -- and another lesson in papal economics:

"I don't want a whole new set of frames, just new lenses," the pontiff told Alessandro Spiezia, proprietor of the eyewear shop in Via del Babuino in the heart of the pricey Spanish Steps section of the Eternal City.

But Francis wasn't trying to pull one over on Spiezia, according to a Vatican Radio report on the papal outing:

"Please, Alessandro," Francis then whispered in his ear, "charge me whatever it costs."

Francis is known for his simplicity: He remained in the papal guest residence rather than moving into the sumptuous papal apartments after his election in March 2013. And he has preached that the church must be poor and serve the poor, and that everyone must live more economically.

The Argentine pope also famously phoned his cobbler back in Buenos Aires soon after his election, asking him to repair the plain, and battered, black orthopedic shoes he prefers. And photos of Francis have shown threadbare sleeves on the trademark white papal cassock.

Spiezia told The Associated Press he had made the pope new glasses last year, and that the pope had liked them so much that he asked him to fill a new prescription.

"I was supposed to go to the Vatican yesterday to bring them, but the pope told his secretary, 'No, I don't want Spiezia to come here, I'll go to Via del Babuino,'" a clearly emotional Spiezia later told the AP.

After 40 minutes with Spiezia -- including an eye exam -- the pope left the shop with his new lenses and returned to the Vatican in a Ford Focus, accompanied only by his driver and some plainclothes police.

Spiezia was moved by the encounter, and the crowd certainly got more than it bargained for:

Daniel Soehe, a German tourist visiting Rome with his father, told the AP they had given up trying to climb to the top of St. Peter's Basilica earlier that day because the lines were so long and there was too much security. So they returned to their hotel.

"I told my father, 'Hey, that was better than going to St. Peter's dome: seeing the pope in a shop trying on new glasses.'"

Francis probably enjoyed it all as well. He has lamented that what he really misses about being pope is being able to go out for a pizza without being recognized. Still, he seemed to enjoy the crowd that gathered, smiling and stopping for photos.

When someone told Francis that this was the first time any pope had done such a thing, he smiled.

“What’s so strange? Where else do you go for new glasses except the optician?” he said, according to Vatican Insider.

Meanwhile, Americans who are eagerly awaiting his Sept. 22-27 visit to Washington, New York and Philadelphia are scrambling to find tickets for papal events that are likely to be filled through parish lotteries that offer high odds and not much else.

Maybe they should hang out a sign offering some slightly more upscale eyeglass frames.