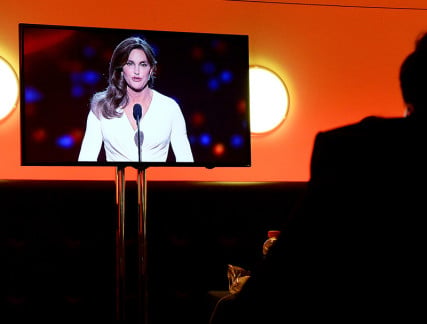 Caitlyn Jenner, recipient of the Arthur Ashe Courage Award, is seen on a TV set in the press room during the 2015 ESPY’s award show at Nokia Theater in Los Angeles, California on July 15, 2015. Photo by Jayne Kamin-Oncea-USA TODAY Sports, courtesy of Reuters

(RNS) In the first episode of E! Network’s “I Am Cait,” Caitlyn Jenner’s mom, Esther, asked about the Bible’s stance on transgender identities, wanting to know whether her daughter’s identity goes against Scripture.

Neither Caitlyn nor the gender specialist therapist present had an on-screen answer for Esther’s inquiry. And most people don’t have answers readily available when it comes to trans identities and Scripture.

Really, it is not all that complicated. There are only six verses used when discussing same-sex relationships. With transgender identities, the only verse that could be interpreted in addressing transgender people is Deuteronomy 22:5.

Being trans isn’t dressing in certain clothing, it’s experiencing your body as a different gender than the one you were assigned at birth.

READ: Call her Caitlyn: calling trans people by their names

A person’s sex is determined at birth by doctors who examine the baby’s genitals, but gender a more complicated blend of mental identity and social presentation. Too often, we conflate the two assuming someone’s gender matches their sex at birth. The two aren’t always the same.

As with any part of Scripture that was written thousands of years ago, context is our friend.

Clothing is gendered to fit cultural norms. What was once acceptable for men and women has changed over time and varied by culture. Men used to wear heels and women used to only wear skirts. Both of these have changed in terms of what we find “acceptable” but it is not innately tied to our gender.

Genital mutilation is also mentioned in the Bible. Yet, those references are about pagan worship and cultic practices. They certain are not comparable to the gender reassignment surgeries that are administered today. (No self-respecting surgeons would call their work “mutilation.”)

READ: The church’s devaluation of trans lives is violence

The only other account people could use to discredit transgender people is the Creation story. There are fabulous queer theology readings of the story that account for the diversity of sex and gender. However, the reality of intersex individuals in our lives proves that sex isn’t binary. It’s fluid, messy, sometimes complicated, and not always neatly configured into a “man” or a “woman” box.

The truth is the Bible never addresses transgender identities. Certainly not in the way we understand them today. Scripture does reflect on sexual minorities and when it does it speaks of them highly. Notably, eunuchs, which were a sexual minority of that time, are heralded in Scripture.

Transgender identities can be threatening to many Christians because they are foreign. As with most things, we prefer binaries and traditions that don’t make us question our longstanding beliefs. As trans visibility increases, so will the confusion around what the Bible says, or doesn’t say, about trans identities. However, we’ll never find verses that are 100 percent applicable to what we understand as trans identities today.

The goal is to read Scripture in context and through our experiences  — not to force our contemporary experiences onto Scripture.