HONOLULU (RNS) — I would love to be able to show you all of Masami Teraoka’s artwork on display here at the Museum of Art.

But as we are a family website, I can’t. At least not in their entirety. I can share some pictures of a lower left-had corner here, a slice of the center there. But the 79-year-old Japanese-American’s larger works are so graphic many readers would be shocked, dismayed and maybe even disgusted.

They are, in short, art.

Teraoka’s pictures feature cassocked and collared priests doing very bad things to or with very scantily clad women. There are exploding pregant bellies, blood, whips and people engaged in what looks like torture. The Christian imagery is unmistakable — there are crosses, horses of the apocalypse and and halos — and the Catholic imagery is equally as clear — there are red papal shoes and even a pope or two. 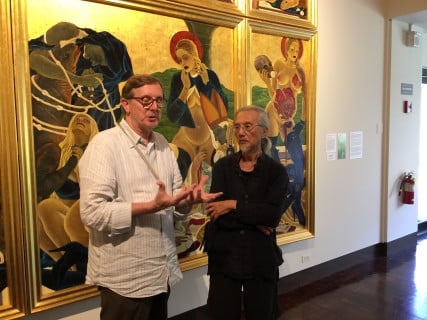 Teraoka, who met with the group of 18 international journalists I am traveling with as part of the East-West Center’s Senior Journalist’s Seminar, spoke about his work in one of the museum’s main galleries temporarily dedicated to his work and over lunch in the museum’s outdoor restaurant.
.
(Readers who have been reading along since Washington, D.C. will note we grew by one — an Iranian journalist picked for the trip finally got his U.S. visa and met us here.) 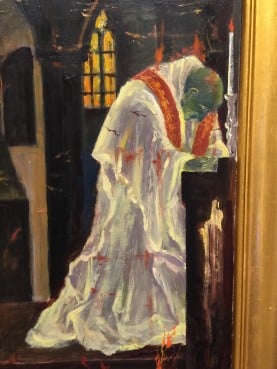 Detail of one of Teraoka’s works

He told us his works are inspired by two unrelated things. First, a trip to Florence brought him face-to-face with Italian Renaissance art with its triptych format and religious subjects. Then Bill Clinton met a young intern named Monica Lewinsky.

“I was watcing Lewinsky and Clinton trial and I felt like, wow, haven’t we gone through hippie times and understand a liberated idea of human sexuality,” he said in English, which is not his first language. “Suddenly this society was getting so conservative and the impeachment trial seemed to have reflected a conservative viewpoint.”

He wanted to trace where that viewpoint came from and it led him, he said, “to the Vatican.” He feels the Vatican has a “long history” of moral positions that conflict with some less than moral actions — the Inquisition, the clergy sex abuse scandals — and he wanted to draw attention to that.

“I said, ‘Ah that is interesting,’” he said. “For me, that was a personal statement on American culture.” 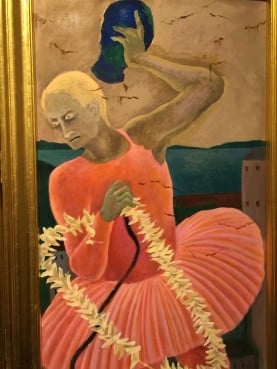 Vladimir Putin as a ballerina? Teraoka’s works are eclectic

Teraoka has commented on American culture before. He is best known for “McDonald’s Hamburgers Invading Japan,” a series of works inspired by Japanese woodblocks that feature the Golden Arch’s flying burgers and other symbols of American consumerism invading foreign cultures.

But his current works, called “Cloisters Last Supper — Triptych Series,” are different. The largest and most disturbing are triptychs — three-paneled works usually found in medieval and Renaissance religious works — that fold open and closed. Like his earlier works, they blend genres and clash cultures. Some figures intentionally look like Vladimir Putin, the members of Pussy Riot and Pope John Paul II. There is a lot of blood and gore and sexual content. 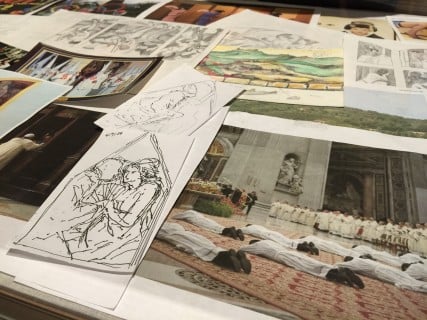 A display of images/sketches Teraoka draws inspiration from

But the point of his work, Teraoka said, is not to criticize Christianity, Catholicism or any religion.

“To me, I am not really criticizing the Roman Catholic Church at all but I am criticizing its abuses,” he said, standing before a work titled “The Last Supper/Inversion of the Sacred.” “I am just presenting. I don’t want to be a preacher.”

Truly, for a man who is so soft-spoken you have lean forward in your seat to hear him, and so slight you wonder how he doesn’t blow away in one of the island’s summer storms, his artwork is so bold, so in-your-face challenging and so difficult to embrace, it is hard to believe he created them.

But he did, from his studio on Waimanolo, on Oahu’s more Bohemian north shore. The paintings will tour California in the next few months, with stops in Oakland, San Francisco, Sacramento and Fullerton.

James Jensen, the museum’s curator of contemporary art, said he knows of no other working artist whose works have been so critical of the clergy sex abuse scandal.

“He has interesting mind,” Jensen said of Teraoka. “He picks up on all kinds of things in the media and he works here in isolation. We decided it was important to show these works here before they are dispersed for sale.” 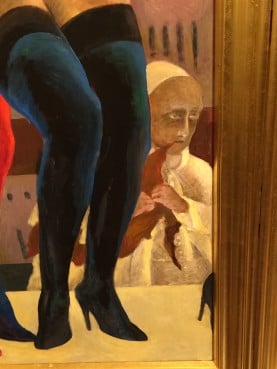 Meanwhile, Teraoka is on a quest to get Pope Francis to review his works. He told us he has tweeted the popular pontiff.

“But he has not called me,” Teraoka said. “If he calls me, I will be so excited because I think he is a nice guy, very humanity-oriented and really human. If I met him I would say, ‘Hi, Pope Francis, I think we are on the same page.”

And one more thing: “Listen, Pope Francis, if you are really serious in reforming the Vatican you should show my paintings in the Sistine Chapel.”

That should get Bill Donohue’s attention.