A Muslim flight attendant said the Atlanta-based airline ExpressJet suspended her for refusing to serve alcohol, a practice that is against her religious beliefs.

Charee Stanley filed a discrimination complaint with the Equal Employment Opportunity Commission last week, saying she wants to do her job without serving alcohol, as she was doing before her suspension, her lawyer said.

Lena Masri, an attorney with the Michigan chapter of the Council on American-Islamic Relations, said no one “should have to choose between their career and religion.” Employers, she told CNN, must “provide a safe environment where employees can feel they can practice their religion freely.”

Stanley, 40, began working for ExpressJet nearly three years ago. She later converted to Islam and only learned earlier this year that her faith prohibits her both from serving alcohol and consuming it. She approached a supervisor on June 1, Masri said, and was told to work out an arrangement with other flight attendants.

“We know that this arrangement has worked beautifully and without incident and that it hasn’t caused any undue burden on the airline,” Masri said. 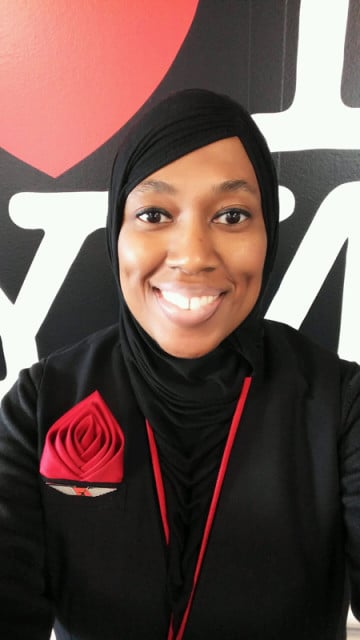 Charee Stanley, a Muslim flight attendant, says ExpressJet suspended her for refusing to serve alcohol, which is against her religious beliefs. Photo: courtesy of CAIR-Michigan, via USA Today

But she said a co-worker filed a complaint on Aug. 2, saying Stanley was not fulfilling her duties. The complaint, which Masri characterized as “Islamophobic,” also said Stanley had a book with “foreign writings” and wore a head scarf.

On Aug. 25, the airline told Stanley it was revoking its religious accommodation and placing her on administrative leave.

“She was disciplined as a result of following the instructions of ExpressJet,” Masri told USA TODAY. “They directed her to do that — she carried out what she was instructed to do by the airline, and she was ultimately disciplined for that.”

Masri said the alcohol complaint was the only one filed against her client.

Jarek Beem, an ExpressJet spokesman, told CBS that the airline couldn’t comment on a personnel matter, but said, “At ExpressJet, we embrace and respect the values of all of our team members. We are an equal opportunity employer with a long history of diversity in our workforce.”