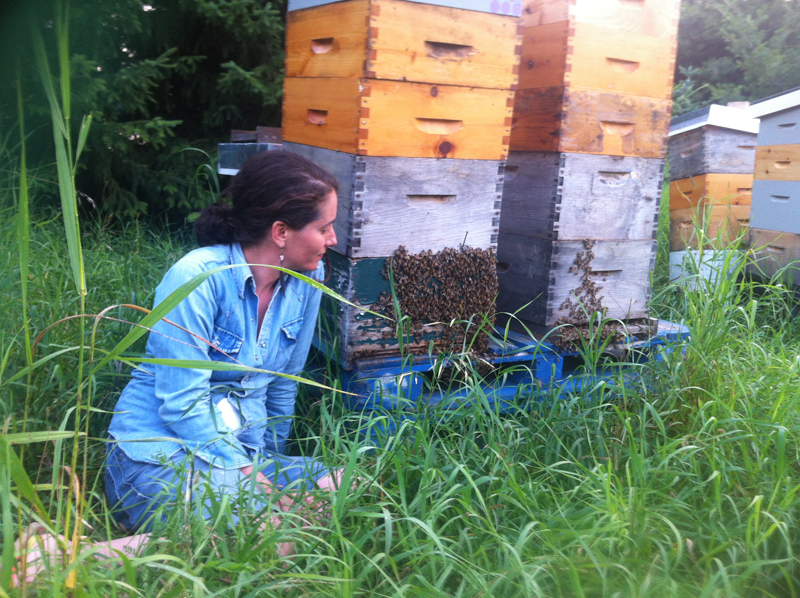 (RNS) Sabrina Malach acknowledges that she once felt some “Jewish guilt” about her honeybees.

“Are we stealing from them?” she had asked herself. “They’ve done all this work. They never stop, and now we’re taking all their honey.”

But as she looks toward the Jewish New Year, which begins Sunday evening (Sept. 13), the Jewish beekeeper shares that she eventually learned the opposite lesson about bees and honey, a gastronomic symbol of the holiday. “Bees teach that nature is generous and abundant,” said Malach, who works at Shoresh, a Canadian nonprofit that links environmentalism to Jewish practice.

“It’s through pollination that I see the spirituality of beekeeping,” she said. They are a species that helps other species thrive and survive.”

The lessons of the hive are all the more crucial to learn this New Year, say Jewish apiarists, as beekeepers are called. A worldwide, decade-long collapse of honeybee hives continues, and bees may be a bellwether species of the consequences of environmental degradation. Beekeeping, for many, is both an ecological and religious mission.

Shoresh’s six healthy hives, tended on a farm about an hour’s drive from the group’s Toronto headquarters, this year will produce more than 40 gallons, or 1,000 jars of honey in time for Rosh Hashanah, the Hebrew name for the holiday.

On Rosh Hashanah, “the head of the year,” Jews the world over will eat apples dipped in honey and wish each other not just a happy, but a “sweet” new year. In the Torah, or Hebrew Bible, the Promised Land is known as “the land of milk and honey.” For dessert at Rosh Hashanah dinner, Jewish families bake honey cake (recipe below).

And though no one is keeping tabs, the idea that Rosh Hashanah honey should come not from the supermarket, but from a fellow Jew who has taken up beekeeping as a spiritual hobby, seems to be spreading. It’s part of a Jewish back-to-the-farm movement, said California beekeeper Alisa Goldberg, and it stretches from her San Jose backyard to the rooftops of Brooklyn. “Eating honey on Rosh Hashanah can seem even sweeter when it comes from your own hive, or that of a neighbor or friend,” said Goldberg in an email from Israel, where she is spending the holiday. Her husband, Harold Goldberg, has inspired several neighbors to establish hives of their own, and this year five Jewish families joined together for a pre-Rosh Hashanah honey extraction project.

“We don’t sell the honey, but try to share it as generously as we can,” he said.

Avraham Laber, an Orthodox rabbi and beekeeper who learned the craft from his neighbor in Troy, N.Y., 10 years ago, now uses his hobby to teach both adults and children about taking responsibility for their communities and the planet. 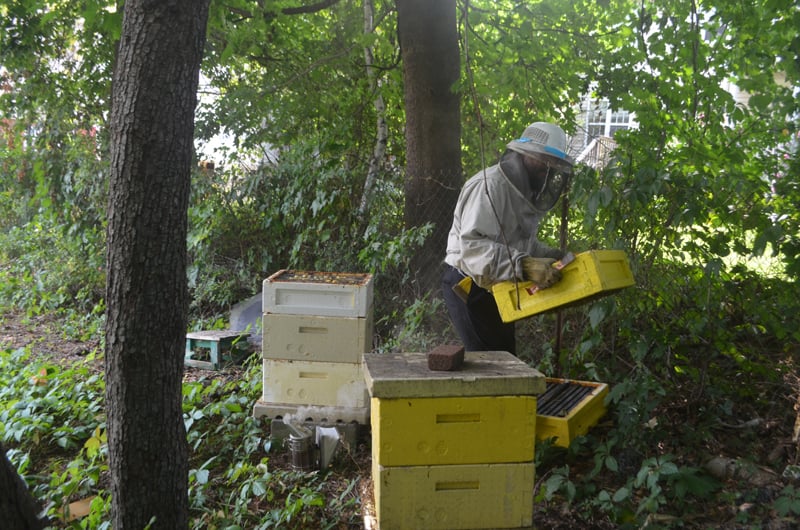 Honeybees — which pollinate plants as they nourish themselves, and which form harmonious hives where each insect contributes to the welfare of each other — reflect Jewish teachings on life and the divine, Jewish beekeepers say.

“What we see in the service of honeybees is the amazing lesson that everyone can be both a giver and receiver,”  said Laber, of the Chabad movement.

Take the trees that need the bees to pollinate their flowers before they can bear fruit. “God created them that they don’t just have to beg for help,” he said. “They can offer something in exchange — their nectar — to get what they need.”

Of course honeybees are not getting what they need. Scientists in the past decade have documented the global demise of the species: Each year about a third of hives collapse.

The problem, known as colony collapse disorder, terrifies farmers and environmentalists who understand that honeybees are key to the survival of a host of crops. A number of culprits are thought to have contributed to the mass bee deaths. Among them: pesticides, a mite, harsher weather and the declining diversity of pollen-producing wildflowers. Beekeepers tend to the bees at Bela Farm, west of Toronto. Photo courtesy of Lisa Borden

Rabbi Fred Scherlinder Dobb, of the Coalition on the Environment and Jewish Life, does not keep bees, but sees them as symbols of nature’s intricacy, celebrated on the birthday of the Earth each Rosh Hashanah.

He notes that God in the Torah pronounces parts of his creation “good,” but only proclaims it “very good” after he surveys “all” that he created, “the interconnected whole.”

“That is the web of life, and because bees touch so many strands of that web within a local ecosystem, we need to hear the silent cry of the absent bees,” said Scherlinder Dobb.

He called it an ecological and theological warning.

“With every hive that collapses we are seeing humanity placing its footprint directly over the divine signature of creation.”

1. Preheat the oven to 350 degrees, and evenly grease a Bundt pan with butter, vegetable oil or cooking spray. In a large bowl, whisk together the flour, baking powder, baking soda, salt and spices.

2. Make a well in the center and add the oil, honey, both sugars, eggs, vanilla, coffee, orange juice and zest. Using a whisk or an electric mixer set to low speed, combine the ingredients to make a stiff batter.

3. Spoon batter into prepared pan. Place the pan on a baking sheet, and bake until the cake springs back when you touch it in the center, about 1 hour. (Be careful not to overbake.) Let cake stand for 15 minutes before removing it from the pan. Then invert onto a wire rack to cool before slicing. Serve topped with almonds and dusted with powdered sugar, if desired.

Source: The Jewish Daily Forward’s blog, “The Jew and the Carrot”