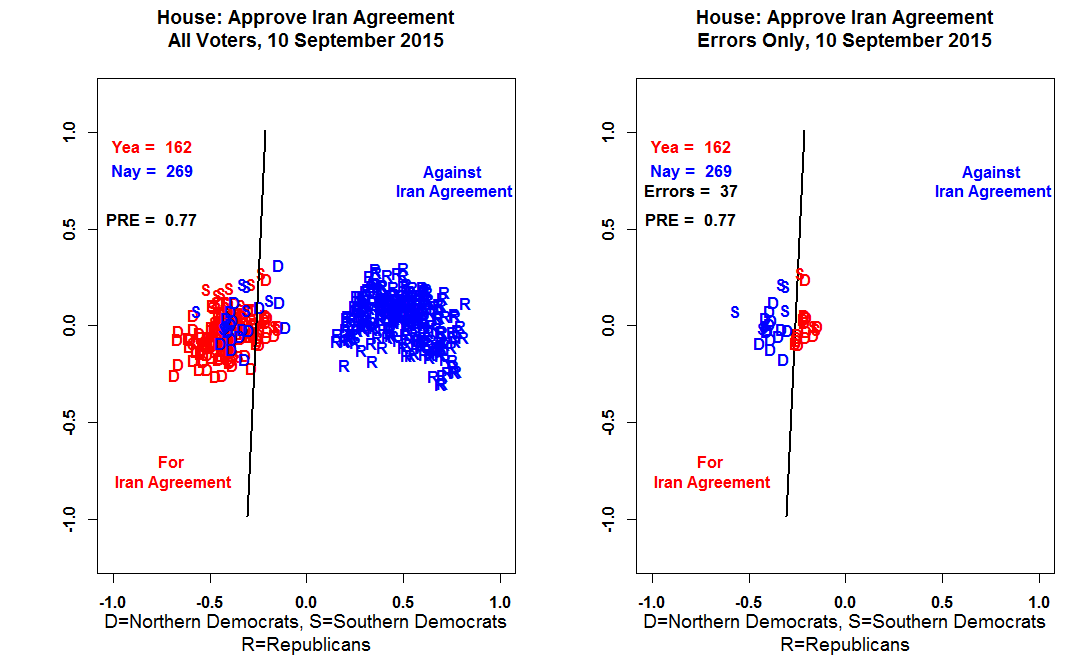 After months of speculation, the debate over the so-called Iran Deal ended with a whimper instead of a bang. The House voted against the deal. The Senate failed to have enough votes to bring it up for debate. The agreement is as a good as done.

But for researchers who study Congress, the votes on the Iran Deal are just a few among the hundreds made each year. With lots of "yeas" and "nays," statisticians can estimate how far left or right legislators are and estimate the "cut-line" that divides the yeas and nays on a particular vote. 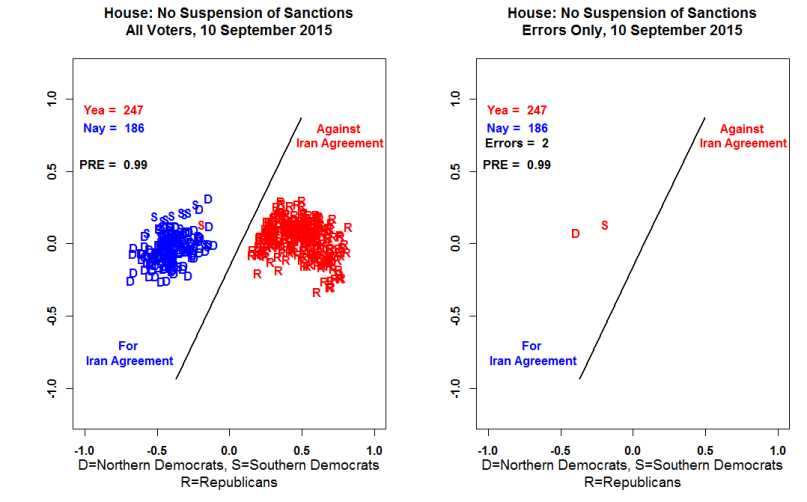 Keith T. Poole, Howard Rosenthal, and Christopher Hare over at the VoteView Blog do this for every vote from 1789 through last week---that's over 12,000 legislators and over 90,000 votes. The result is a powerful set of measures, including pictures of recent votes.

VoteView just released its analysis of the Senate cloture vote and the three House votes on Iran. The Senate vote and two of the House votes were nearly perfect party-line votes. The first set of graphs shows how those looked:

In the graph, we see Democrats clumped together on the left, and Republicans on the right. The vote would have limited the President's ability to lower sanctions on Iran. The line shows the obvious: nearly a party-line vote, with only two Democrats voting with the Republicans. They're shown as the "errors" on the right-hand graph. The one vote that was not a party-line vote was the House vote on the Iran Deal. The House voted against the agreement 269 to 162. The graph shows where these votes came from.

A few of the votes came from Democrats on the conservative side of the caucus. But this was not a vote that pulled a few dozen of the more moderate wing of the party. Most of those joining the Republicans were, literally, the center of the Democratic party. Most of these center Democrats represent districts with high Jewish populations. On most other issues, this constituency does not result in opposing President Obama or the Democratic leadership, but on this issue it did. For other legislators, however, the vote was a partisan or ideological vote just like any other.

Overall, the votes on the Iran Deal looked a lot like many other votes in Congress. With the exception of some Democrats with many Jewish constituents, the votes were party-line votes.