Nugent-Johnson wedding at the National Shrine of the Immaculate Conception, Washington, D.C., in August 1966.

WASHINGTON (RNS) When Pope Francis visits the U.S. in September, he’ll make stops at prominent churches that have drawn the faithful and the curious for decades.

In Washington, he will visit the Cathedral of St. Matthew the Apostle and the Basilica of the National Shrine of the Immaculate Conception. He will stop at New York’s St. Patrick’s Cathedral and celebrate Mass at Philadelphia’s Cathedral Basilica of Saints Peter and Paul.

Here’s a look at some of the history of the Washington and Philadelphia sites: 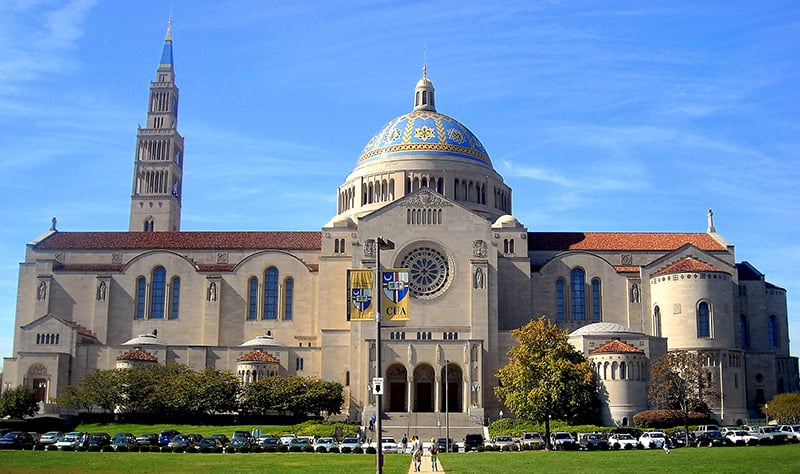 The Basilica of the National Shrine of the Immaculate Conception, located on the Catholic University of America campus in Washington, D.C. Photo courtesy of AgnosticPreachersKid via Wikimedia Commons

Basilica of the National Shrine of the Immaculate Conception, Washington, D.C.

The dome, decorated with polychrome tiles, and the 329-foot tower of this imposing building can be spotted from across the nation’s capital. It is the largest Catholic church in North America and one of the 10 largest in the world.

In 1910, Bishop Thomas Shahan launched a campaign for the building of the shrine to honor the Virgin Mary. Pope Francis will visit the site on the 95th anniversary of the laying of its cornerstone, in 1920.

The edifice includes the Crypt Church on the lower level, completed in 1926, and the Great Upper Church, which was dedicated in 1959 after delays during the Depression and World War II.

The shrine has the world’s largest collection of contemporary ecclesiastical art, with 81 altars and devotional spaces paying tribute to Mary by cultures across the globe.

“Our interior reflects the demographics of the United States,” said basilica archivist and curator Geraldine M. Rohling. Cultures represented range from the Czech, Slovak and Polish chapels that were donated and dedicated in the 1960s to the Our Mother of Africa Chapel constructed in the 1990s.

In 1968, the shrine acquired the tiara of Pope Paul VI, the last pope to wear the traditional papal crown. He famously removed it in 1963; proceeds were given to the poor, and donations continue to be given to a papal fund for the poor.

The shrine is not a parish church, but it offers daily and weekend Masses. It has had just one wedding — of the younger daughter of President Lyndon B. Johnson, Luci Baines Johnson.

The Great Upper Church is used for special large gatherings, including the annual prayer vigil the day before the March for Life in Washington, D.C., each January, and special occasions, such as prayers on 9/11.

“It was very chilling because if you stood on our front steps or you walked in the front steps, you could see the Pentagon burning in the distance,” said Rohling of that day in 2001.

An estimated 1 million people spend time at the site each year, attending Mass, going to confession or visiting as pilgrims or tourists. 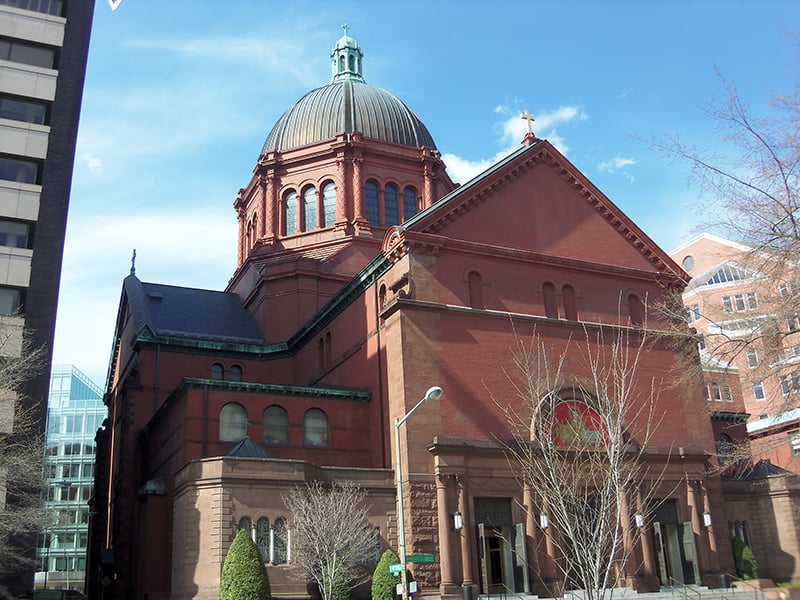 This parish was originally dedicated in 1840 at 15th and H streets, NW, but later moved to its current location on Rhode Island Avenue, less than a mile away. Architect Christopher Grant La Farge, who also worked on the plans of the Cathedral of St. John the Divine in New York City, designed the Italian Renaissance structure. The first Mass there was celebrated in 1895, but its exterior construction continued through 1913, when its cross-topped copper dome was put in place.

In 1939, it was named a cathedral and became the mother church of the Washington archdiocese after Pope Pius XII separated it from the Baltimore archdiocese.

It is best known as the site of the funeral of President John F. Kennedy — where his young son and namesake memorably saluted his casket. But the brick and sandstone edifice also was where the funeral service was held for Supreme Court Chief Justice William Rehnquist.

On the first Monday in October, the downtown cathedral hosts the annual Red Mass, which is often attended by Supreme Court justices, and features prayers for legal professionals. The clergy who celebrate the Mass traditionally wear red.

Some 2,500 people, including many single young adults, worship there each weekend. 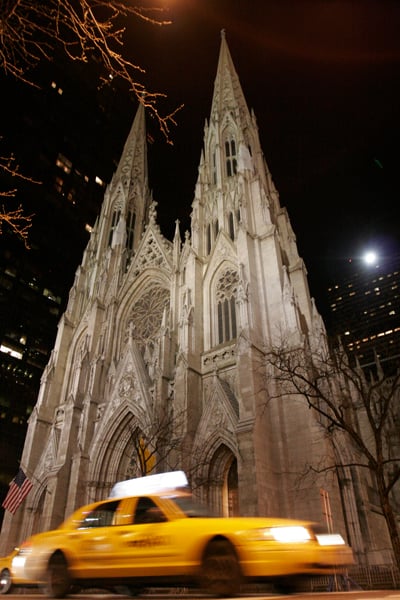 A taxi passes by St. Patrick’s Cathedral in New York. RNS photo by Gregory A. Shemitz

It was financed by rich and poor alike — from $1,000 donations by wealthy Catholics to the token gifts of poor immigrants.

Named for Ireland’s patron saint, it is the second New York cathedral, built after what is now known as the Basilica of St. Patrick’s Old Cathedral, which was dedicated in 1815 and is about three miles away.

With its cornerstone laid in 1858, the newer cathedral was the vision of Archbishop John Hughes and was designed by architect James Renwick. Some criticized it as “Hughes’ folly,” but the cathedral ended up as he envisioned, in what has become “the heart of the city,” near Rockefeller Center, the Museum of Modern Art and the high-end designer shops of Fifth Avenue.

Fundraising delays and the start of the Civil War halted construction from 1861-1866. By the time it was dedicated, the Gothic Revival building was the “working seat of America’s largest diocese and the grandest church in the Western Hemisphere,” wrote Charles Morris, author of “American Catholic.”

Artisan Charles Connick contributed the design of stained glass windows that were installed in the 1950s.

More than 5 million people visit the cathedral each year; Masses are offered seven times each weekday and 11 times on holy days. 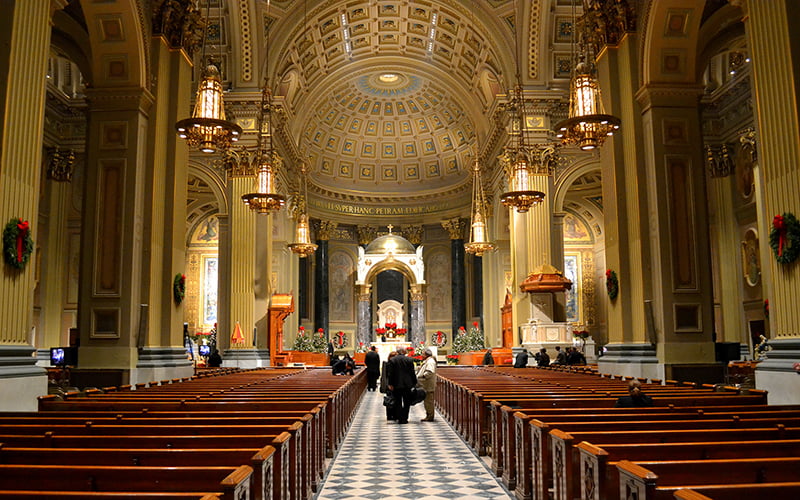 Image of the interior of the Cathedral Basilica of Saints Peter and Paul in Philadelphia. Photo courtesy of Interstate295r via Wikimedia Commons

The brownstone cathedral, completed in 1864 in the Roman-Corinthian architectural style, was modeled after the Lombard Church of St. Charles in Rome.

Unlike many other churches, for almost a century the basilica did not have stained glass windows in its lower level.

“It was a time of anti-Catholic sentiment in the city of Philadelphia,” said the Rev. Dennis Gill, rector of the cathedral. “Because the anti-Catholic sentiment was often expressed by people breaking windows of Catholic churches and burning them down, in order to avoid that happening to the cathedral the windows were put at such a height so that they would be less easily broken.”

Later, in the 1950s, stained glass was added to the lower section of the cathedral.

It has ties to several U.S. saints, including John Neumann, the bishop under whose tenure much of the edifice was constructed and who established the first parochial school system in the U.S., and Katharine Drexel, a philanthropist and educator who founded the Sisters of the Blessed Sacrament, who worshipped at the cathedral.

The cathedral also was the host of the International Eucharistic Congress, held in 1976 as the United States celebrated its bicentennial.

“The theme was that the Eucharist satisfies the hungers of the human heart,” said Gill. “It was an occasion for the church to highlight what it holds most valuable.”

The cathedral, located in Philadelphia’s center city, continues to function as a parish, with about 1,500 worshippers attending each weekend.