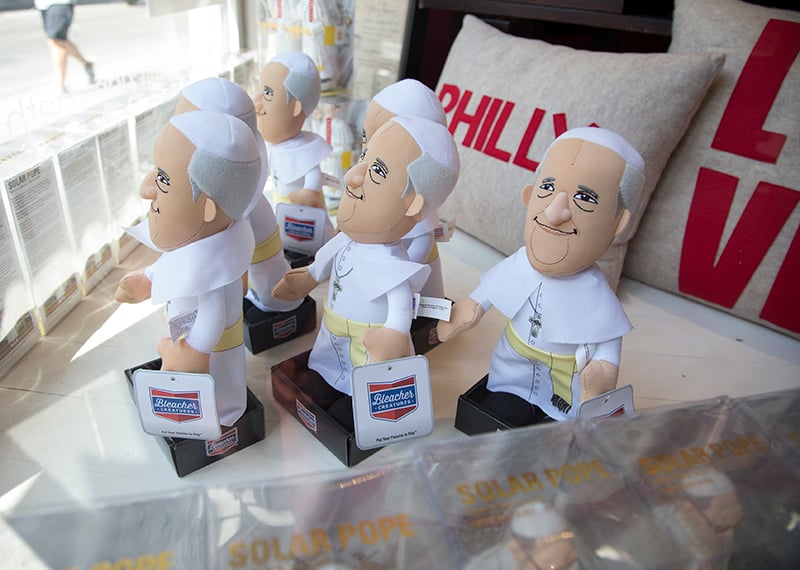 (RNS) Creative and commercial attempts to cash in on Pope Francis’ upcoming U.S. visit this month know (almost) no limits.

Whether you brave the crowds to see Pope Francis in Washington, New York or Philadelphia — or just tune in to media coverage from home — entrepreneurs are banking you’ll crave a papal-visit-prompted souvenir to crow about.

Philadelphia, Francis’ last stop (Sept. 26 and 27) on the U.S. tour — and the setting of his biggest public event, a Mass on the city streets — has become the epicenter of mass marketing.

DRINK TO THAT: At certain city taverns, you can toast the pope’s health with a draft of #Yopo (#You Only Pope Once) pale ale. Sorry, no bottles, says the Cape May, N.J., brewery that created the hoppy suds. Three of the 15 Philly bars and restaurants carrying the brew — Perch Pub, McGillin’s Olde Ale House and Oyster House — are right by the downtown security zones for the papal visit.  The brewery website highlights other spots in New Jersey as well.

CHEESY TRIBUTES: Munch on mozzarella carved in Pope Francis’ likeness. Pastificio Homemade Pasta Co. ordered a mold of Francis’ likeness to produce 6-inch-tall cheese popes weighing about a pound each. Co-owner Anthony Messina described the hot-selling $20 cheese heads as “more of a table centerpiece but you definitely can eat it — it’s good cheese.”

Go for a totally pope grilled cheese, with a Francis image toasted right onto your slice of Wonder Bread, with a $48.95 Pope Toaster. 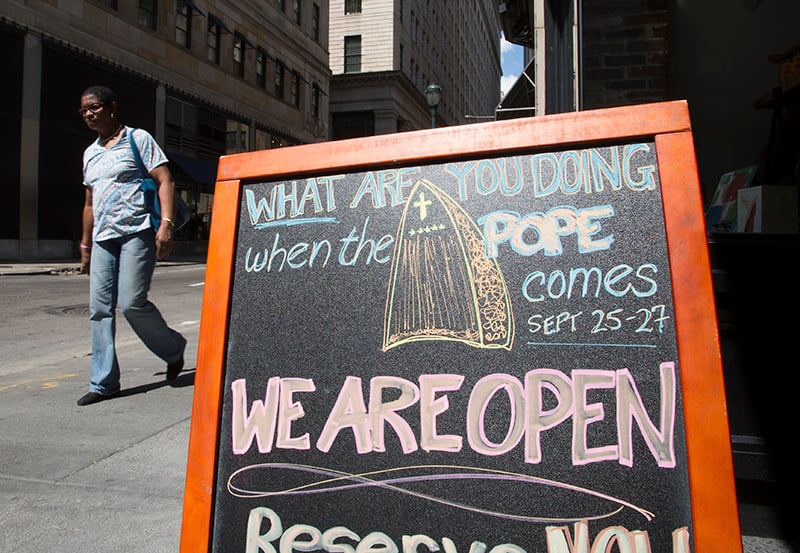 A sign advertises a spa in downtown Philadelphia on Aug. 28, 2015, a few weeks before Pope Francis’ scheduled trip to the United States. Religion News Service photo by Sally Morrow

STAND-UP GUY: The budget-minded can pose for endless selfies with the cardboard Pope Francis stand-ups propped all over downtown Philadelphia. Not going to Philly? The Internet levels the pope collectible shopping field. You can order your own cardboard Francis for a papal visit “watch party” at home ($69.95 on Ebay).

GO SOLAR: Or get a solar-powered pontiff statue for $18.95 on Amazon. He waves with the light.

HE’S A DOLL: Sleep with Francis (figuratively speaking, of course). For less than $20 online, you can  get a snuggly Pope Francis doll from the same Bleacher Creatures folks who bring you endless bobblehead sports figures.

PAPAL CROSS: Notice in photos of the pope that he’s wearing an unusual cross on his chest.

Pope Francis, who constantly urges his brother bishops to be close to their flock, likes to say “the shepherd should smell like the sheep.” 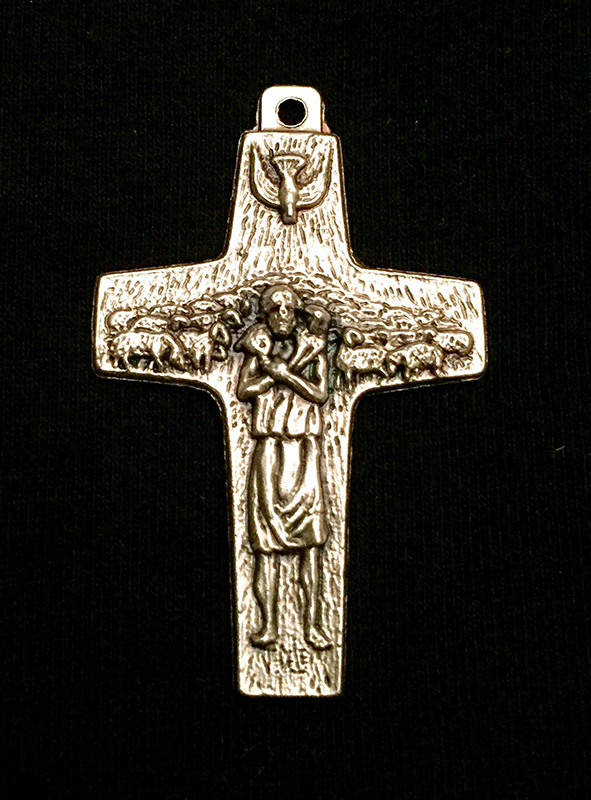 Italian craftsman Antonio Vedele designed the cross and Vedele’s student, Giuseppe Albrizzi, made it for Francis when he was archbishop of Buenos Aires. He explained that the image shows “Christ the Good Shepherd leading the flock,” and he “carries the lost sheep on his shoulders. On the top of the cross is depicted the Holy Spirit.”  Now, replicas are on sale for a range of prices (about $2 to almost $1,000 for a sterling silver version) at multiple Catholic gift stores and websites.

POPE T-SHIRTS: Wear your cross with a $10 custom-order T-shirt with “Smell like your sheep” emblazoned on it — or try one of the 39 other slogans available, such as “Share with the poor.”

Even the craft website Etsy is in on this act — crossing Rocky imagery with Pope Francis for the pontiff in boxing gloves on $25 shirts, among selections in Etsy’s “Pope Is Dope” section.

PIZZA FOR PAPA: Any pizzeria worth its sauce will have something in mind to honor the pizza-craving pope, although it’s unlikely his swarm of security forces will let anyone pounce on him with a pie in hand, as one entrepreneur did in Rome. Still, be on the lookout for pizza boxes emblazoned with a drawing of the pontiff, sketched out on boxes from restaurant supplier Savona-Stavola Foods.

POP-UP SHOPS: Even the church’s official World Meeting of Families — the event that put Philadelphia on the pope’s itinerary — has a retail arm cashing in on the hoopla. It has pop-up-Pope shops around the center city selling everything from $5 prayer cards for the humble to a $200 crystal and gold rosary. Solar Pope figures are on display in the window of Open House, a shop in downtown Philadelphia, on Aug. 28, 2015, weeks before Pope Francis’ scheduled visit to the United States. Religion News Service photo by Sally Morrow

GOODS FOR A CAUSE: Of course, you could skip the shopping and piously meditate on this pope’s many comments on “the idolatry of money” and greed for more than we need. But if you can’t stifle the souvenir urge, the workaround is easy: Do good while loading up on goodies.

Project Home, a Philadelphia nonprofit that aids the homeless and hungry, has a range of items on sale honoring the pope and benefiting a cause dear to Pope Francis’ heart.