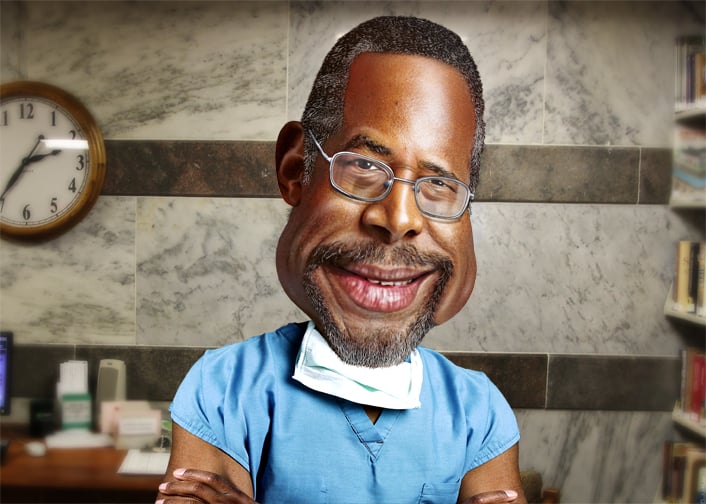 Caricature by DonkeyHotey via Flickr Creative Commons. This caricature of Ben Carson was adapted from a photo in the public domain available via Wikimedia. https://www.flickr.com/photos/donkeyhotey/15788738528/
September 17, 2015
Tobin Grant

Caricature by DonkeyHotey via Flickr Creative Commons. This caricature of Ben Carson was adapted from a photo in the public domain available via Wikimedia. https://www.flickr.com/photos/donkeyhotey/15788738528/

Carson often talks about his mother. She is a key figure in his life, and he spoke highly of her long before he became a political figure.

In 2005, Carson participated in NPR's "This I Believe." This was a remarkable series in which people wrote their personal credos. Carson spoke eloquently of his mother.

"The simplest way to say it is this: I believe in my mother," Carson begins. He then tells not only of how his mother raised him but also of her faith while he was battling cancer.

"My story is really my mother’s story," he concludes. "A woman with little formal education or worldly goods who used her position as a parent to change the lives of many people around the globe. There is no job more important than parenting. This I believe."

Regardless of your politics, the essay is worth a few minutes of your time.

For what it's worth, here are the answers of the other candidates.

Yes, two candidates named women who aren't U.S. citizens; one named no woman; and three (including Carson) named members of their family. None of them named the top four in a Marist poll: Eleanor Roosevelt, Harriet Tubman, Sacagawea, and Amelia Earhart. Susan B. Anthony was number five (tied with Earhart). Sandra Day O'Connor was sixth.