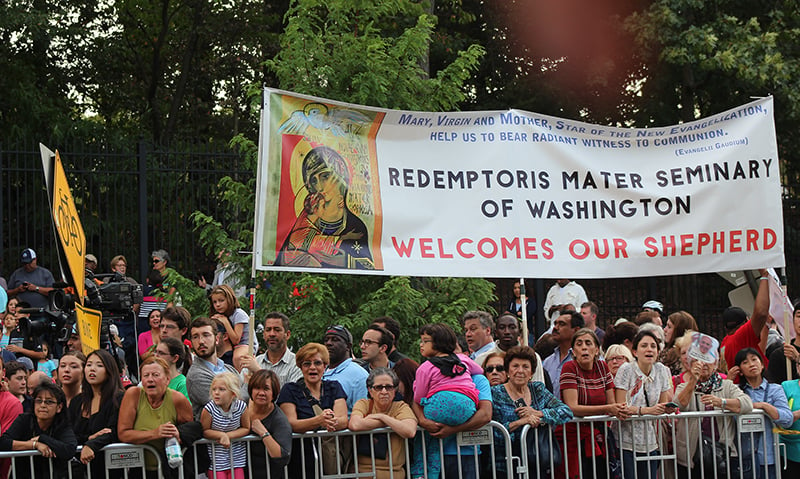 A crowd outside the Vatican Embassy welcomes Pope Francis to the U.S. on Sept. 22, 2015. Religion News Service photo by Adelle M. Banks

WASHINGTON (RNS) With cellphone cameras held high and cheers of delight, an enthusiastic and disparate crowd of hundreds gathered outside the Vatican Embassy on Tuesday (Sept. 22) to welcome Pope Francis to the U.S.

Dozens of members of Neocatechumenal Way, a Catholic lay movement, sang and danced, shaking tambourines and playing guitars. Next to them stood seminarians with a large banner from Redemptoris Mater Seminary of Washington. People crushed together hoping for a glimpse as the pontiff entered what will be his residence for the next three days.

“We are here to be with the pope,” said Pablo Villa, 24, a seminarian who joined two colleagues in holding the big white banner that said the seminary welcomes "our Shepherd” and also had an image of the Virgin Mary. “We are very happy as Catholics to be able to welcome him.”

But there weren’t just Catholics.

Click on the logo above to see all of Religion News Service’s coverage of Pope Francis in the U.S. 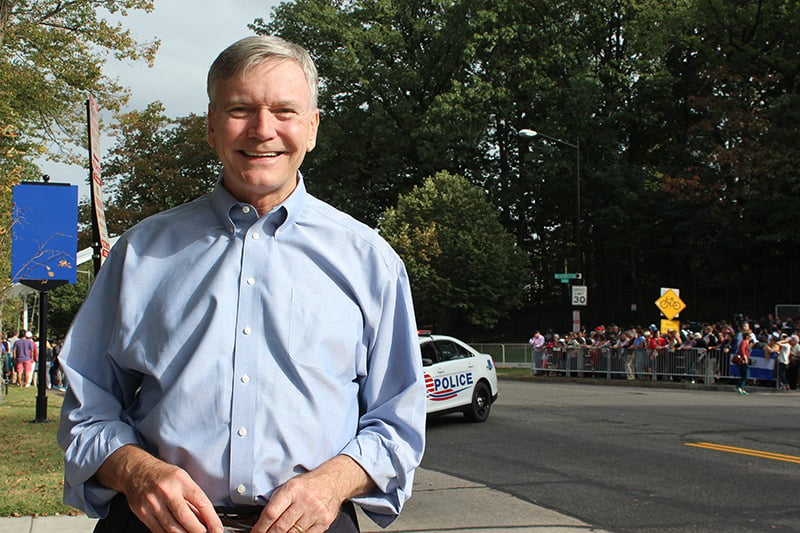 Bill Aiken, director of the Washington Buddhist Center of Soka Gakkai, was part of the crowd outside the Vatican Embassy as Pope Francis arrived in Washington, D.C., on Sept. 22, 2015. Religion News Service photo by Adelle M. Banks

“We’re delighted to welcome the pope and this pope in particular,” said Bill Aiken, director of the Washington Buddhist Center of Soka Gakkai, just two doors away from the embassy. He said the pope’s stances on climate change and immigration reform resonated with his center.

Secular humanist Elizabeth Ferenczi of Washington said: “I admire this pope more than you can imagine.”

Before the pontiff even landed, the Washington faithful -- Catholics and otherwise -- prepared to follow his progress by gathering for watch parties to await his televised arrival at Joint Base Andrews in Maryland or by declaring their support of some of his favorite issues. 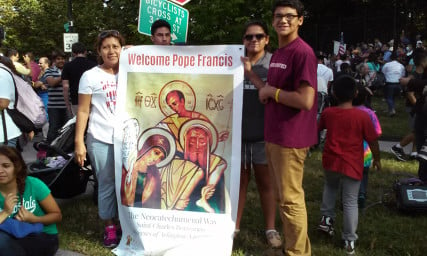 On Monday night, the Iraqi Christian Relief Council held a candlelight vigil for victims of genocide and religious persecution. Organizers of the interfaith observance, which included the singing of Psalm 150 in Aramaic, hoped Francis would call the persecution -- particularly that of Christians in the Middle East -- “genocide.”

On Tuesday morning, Washington, D.C., Cardinal Donald Wuerl joined seven leaders of the Protestant, Jewish and Muslim faiths at a news conference about their summit the previous night with more than 100 others on ending world hunger by 2030. 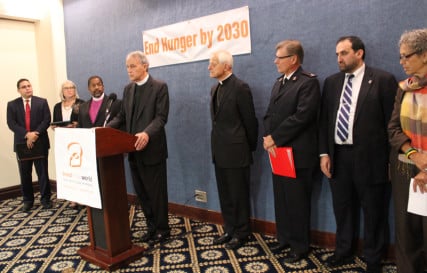 “The pope says to us every one of us has a responsibility for seeing that hunger in the world is something that we can easily and eventually eradicate,” said Wuerl, at the National Press Club.

The Rev. Gabriel Salguero, president of the National Latino Evangelical Coalition, spoke with pride about the Argentine pope. “We Latino evangelicals have thankful appreciation for his leadership addressing the issue of hunger for vulnerable people,” he said.

In the shadow of the Capitol, striking low-wage contract workers from federal offices prayed that Congress would heed Francis’ message about just treatment of the poor.

“We want you to know that even though we serve the wealthy and the powerful in the Congress, we earn so little that we live in utter poverty,” they wrote the pope in a letter last week.

At the Franciscan Monastery of the Holy Land in northwest Washington, 150 people screamed and clapped as they watched on a large screen TV as Francis' plane came into view at the military base in Maryland, said the Rev. Jim Gardiner.

As security barriers were lined up and streets were swept near the monastery, Gardiner, its director of special projects, said many Washingtonians are wondering about what the pope will do beyond his official schedule.

“We’re waiting to see when he’s going to break loose from his handlers,” Gardiner said. “Who knows? If he wants to get away, take a nap or something like that, we got room.”