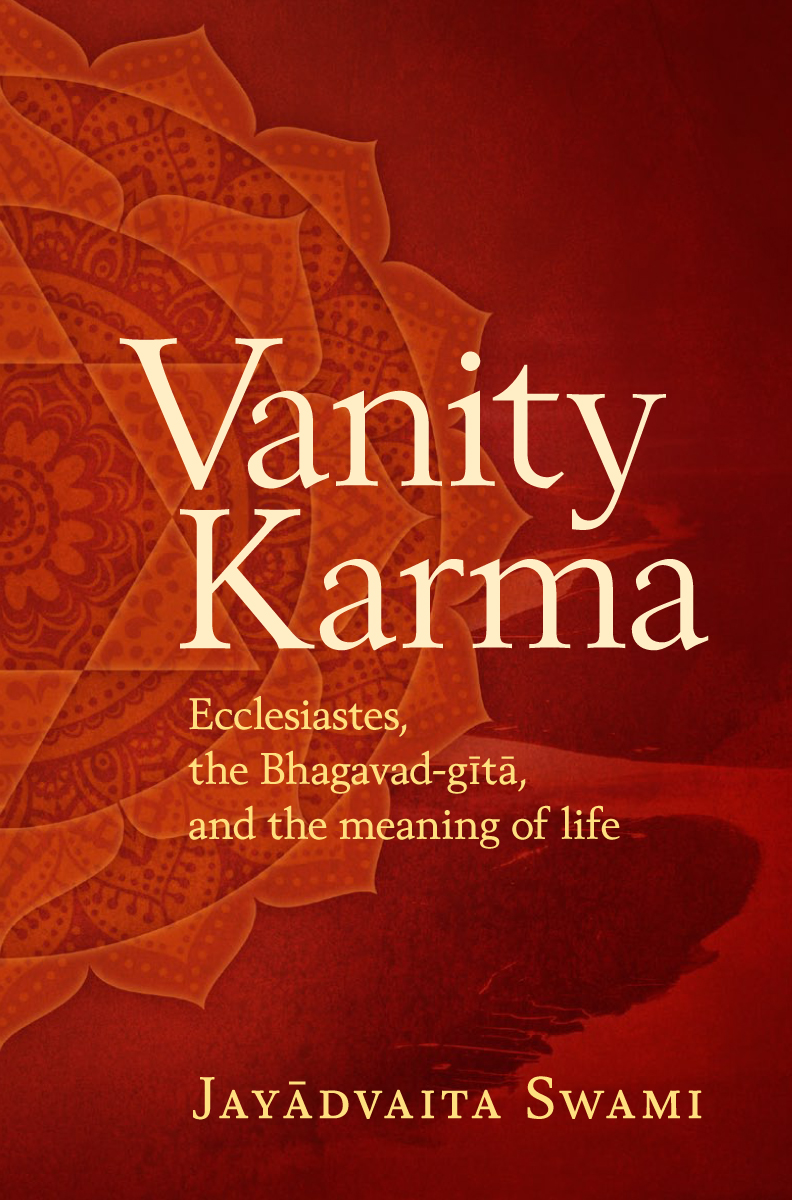 LOS ANGELES — As observant Jews celebrate the week-long holiday of Sukkot, “the festival of booths,” which begins this year on September 27, the biblical book they'll read and reflect on is the book of Ecclesiastes. A lyrical passage from that book provides the words for a song that has gained a place in popular culture, “Turn! Turn! Turn! (To Everything There Is a Season).”

In an unusual turn this year, as the festival begins, a Hindu swami has written a commentary on Ecclesiastes in which he brings it into dialogue with the best-known wisdom text from India, the Bhagavad-gita. To add yet another turn, the swami is a Jewish American from New Jersey who as a young man, forty-seven years ago, took to an Indian spiritual tradition. Born Jay Israel, he now goes by the name Jayadvaita Swami.

“I call my book a cross-cultural commentary,” he says, “because it brings writings together from two traditions, both speaking about life's most important questions.” The book is called Vanity Karma: Ecclesiastes, the Bhagavad-gita, and the meaning of life (Bhaktivedanta Book Trust, 2015, ISBN 0-89213-449-6, trade paperback $15.95, www.vanitykarma.com).

As Jayadvaita Swami tells in an autobiographical introduction, his first encounter with the words of Ecclesiastes, at the age of twelve or thirteen, started him on a search for spiritual meaning that led him, over time, to the teachings of the Bhagavad-gita. Now, in Vanity Karma, he comes back to Ecclesiastes again. Turn, turn, turn.

His commentary draws upon traditional Jewish sources as well as the work of contemporary scholars. And from there the dialogue begins, as he brings to the discussion the thoughts of the Bhagavad-gita, which he studied under his Indian teacher, His Divine Grace A. C. Bhaktivedanta Swami Prabhupada, known for bringing “Hare Krishna” to America.

Though Sukkot begins on September 27, the book is being launched the next day, on September 28. “My mom's birthday,” Jayadvaita Swami explains. “She's ninety-two, still sharp as a pin, and happy with the way my life has gone. So I'm launching the book on her day.”

The Bhaktivedanta Book Trust is the world’s largest publisher of
India’s classic books of spirituality. It publishes in more than 85 languages.

Background for the books

The book of Ecclesiastes, in which a sage calls the very meaning of life into question, begins with the refrain “Vanity of vanities! All is vanity!” The book is accepted as canonical by all denominations of Christians and Jews and has given even secular authors much food for thought. Hemingway, Tolstoy, and Melville all drew from it. So did Orwell, Updike, and T. S. Eliot.  Shaw equated it with books by Shakespeare.

The text of Ecclesiastes is known for turning this way and that, sometimes crying out that all is vain and sometimes endorsing a full-hearted enjoyment of life. So Jayadvaita Swami's commentary turns accordingly, responding to the text.

His commentary draws upon traditional Jewish sources as well as the work of contemporary scholars. And from there the dialogue begins, as he brings to the discussion the thoughts of the Bhagavad-gita, which he studied under his Indian teacher, His Divine Grace A. C. Bhaktivedanta Swami Prabhupada, known for bringing “Hare Krishna” to America.

Though Vanity Karma is written in an informal style, aimed at general readers, it has received positive advance notice from academics.

Dr. Edwin Bryant, Professor of Hinduism at Rutgers University, writes that Vanity Karma is “not just a serious contribution to interreligious dialogue but a spiritual manual in its own right, . . .  offering profound insights relevant to Truth seekers of any tradition.”

Jayadvaita Swami—writer, editor, publisher, and teacher—is a Jewish American who for forty-seven years has been a monk in the tradition of Krishna spirituality. He has edited more than forty English volumes of Sanskrit wisdom literature. He oversees the African division of the Bhaktivedanta Book Trust, the world’s largest publisher of India’s spiritual classics. Traveling year round, he has taught in more than sixty countries. In the 1980s he spent a year and half traveling in India on foot, staying in a different town or village every night. He walked about ten thousand miles.