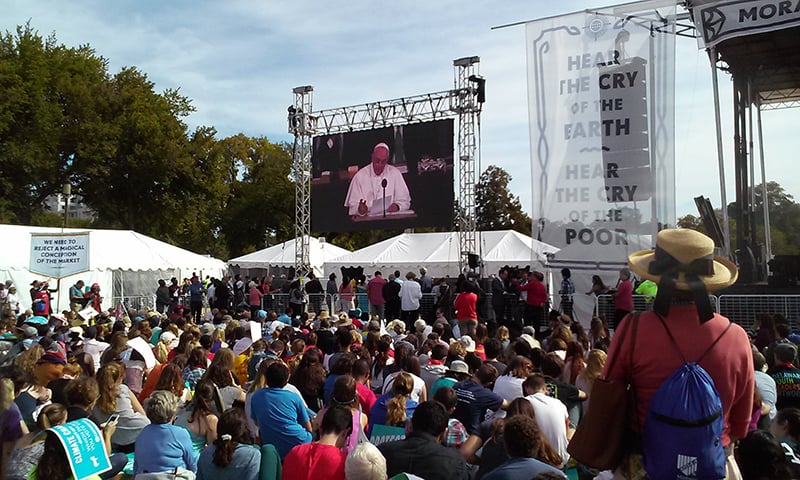 WASHINGTON (RNS) Environmental activists rallying on the National Mall on Thursday (Sept. 24) paused briefly to sit on the lawn and watch Pope Francis’ message to Congress — broadcast live on Jumbotrons  — before resuming their free-spirited demonstrations. 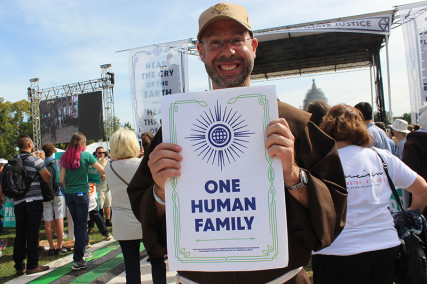 Brother Erick Lopez, a Franciscan friar from Silver Spring, Md., applauded Pope Francis’ messages about protecting the environment and caring for the poor when he listened to the pontiff’s address to Congress on Sept. 24, 2015, from the National Mall. Lopez was attending the Rally for Moral Action on Climate Justice a few blocks from the U.S. Capitol. Religion News Service photo by Adelle M. Banks

The Rally for Moral Action on Climate Justice just a few blocks from the U.S. Capitol was a multiethnic and multifaith event timed to coincide with the visit by the world’s newest and most prominent champion of environmental action to save the planet. The singing, cheering and speechifying continued after Francis spoke but halted again for his two-minute greeting from the west front of the Capitol.

Leaders from the Sierra Club, Pax Christi International, the Union of Concerned Scientists and the Hip Hop Caucus addressed the crowd. Singers Moby and Eric Paslay provided the musical backdrop.

Hannah Lahti, a conservation photographer from Manassas, Va., said she isn’t affiliated with a particular religion but still agreed with the pontiff.

“I think this pope is really modern,” said Lahti, whose backpack contained a poster, seeds and evergreen plants she received at the rally. “And I like what he’s saying about social justice and everything.”

Speakers urged the crowd to heed Francis’ message and address a warming planet by advocating for reduced use of fossil fuels, such as coal and oil, and increased use of clean energy, such as solar and wind power. They decried that a warming planet is having a disproportionate and negative effect on minority communities.

Eddy Barahona of Ashburn, Va., caught a glimpse of the pontiff living out his environmental message. 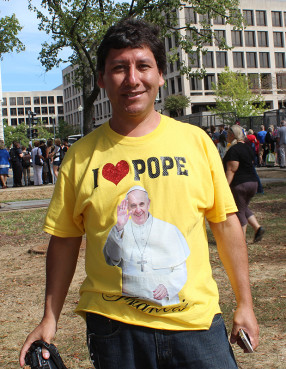 Eddy Barahona of Ashburn, Va., caught a glimpse of Pope Francis while standing on Constitution Avenue in Washington, D.C., when Francis rode by in a small black Fiat after addressing Congress on Sept. 24, 2015. Religion News Service photo by Adelle M. Banks

Barahona was standing on Constitution Avenue when Francis rode by in the small black Fiat he chose over a much larger limousine for his travels around the nation’s capital.

“This pope’s very humble,” said Barahona, who attends a Catholic church in nearby Sterling, Va., and wore a bright yellow T-shirt declaring his love of the pope. “That is a good example for everybody in the world.”

Monsignor Ronald Cellino of Bluffton, S.C., hopes the pope’s message about the importance of dialogue will set an example for the upcoming elections by encouraging people to “be more gentle in their discussions,” whether about the environment or other issues.

“We saw the pope as a little dot up there,” he said, after moving with thousands of others off the west lawn of the Capitol to Constitution Avenue. “But being with the crowd was a wonderful experience.”