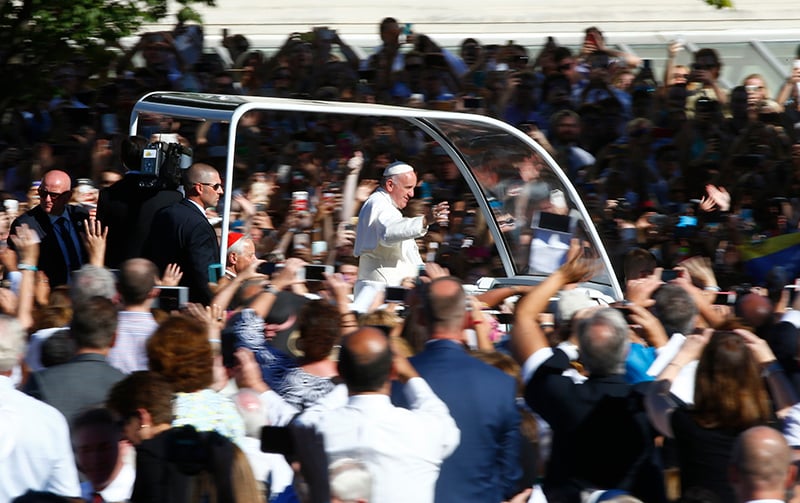 Pope Francis waves to the crowds gathered to see him as he arrives at the Basilica of the National Shrine of the Immaculate Conception in Washington on Sept. 23, 2015. Photo courtesy of REUTERS/Tony Gentile *Editors: This photo may only be republished with RNS-SAINT-SCENE, originally transmitted on Sept. 23, 2015.

WASHINGTON (RNS) A crescendo of cheers and raised cellphones greeted Pope Francis as his white popemobile encircled the crowd gathered for his first Mass in the U.S.

He delighted the crowd by passing not once, but twice, before he arrived at the altar for the Mass in which the first Latin American pope made a Spanish missionary, Junipero Serra, a saint, the first canonization celebrated on U.S. soil.

The crowd was dappled with white — from the shirts of many worshippers seated on folding chairs to the vestments of bishops, whose heads were topped with purple zucchettos, or skullcaps.

The significance of the Mass at the Basilica of the National Shrine of the Immaculate Conception was not lost on Archbishop Jose Gomez of Los Angeles, who tweeted: “Today is the most important day of the Pope’s visit for me, and for Latino Catholics across the #USA and throughout the Americas.”

Click this logo to read more Religion News Service coverage of the pope’s visit to the U.S. Pope Francis dispenses incense while celebrating Mass at the National Shrine of the Immaculate Conception for the Canonization Mass for Friar Junipero Serra in Washington on September 23, 2015. Photo courtesy of REUTERS/Kevin Lamarque
*Editors: This photo may only be republished with RNS-SAINT-SCENE, originally transmitted on Sept. 23, 2015.

The crowd of some 25,000 alternated between cheers for the celebrity pope and stillness during the most solemn moments of the service, such as when the pope held up the Communion host as he stood on the basilica’s white-draped front steps, which had been transformed into an altar. Songs in Spanish and English filled the air as people zigzagged in orderly lines to receive Communion from deacons under yellow and white umbrellas.

“The church that welcomes Your Holiness embraces people from every continent and numerous ethnic and cultural backgrounds,” Cardinal Donald Wuerl of Washington told Francis at the conclusion of the Mass. “ We gather in worship and seek to reflect your call to be missionary disciples. You can see that this church shows the faith reflective of Africa, Central and South America, Mexico, India, Asia, Europe as well as our own Native Americans.”

Vice President Joe Biden led a standing ovation for the pope after Wuerl’s brief remarks of welcome and thanks to the pope. Pope Francis presides over a Canonization Mass for Friar Junipero Serra at the Basilica of the National Shrine of the Immaculate Conception in Washington on September 23, 2015. Photo courtesy of REUTERS/Tony Gentile
*Editors: This photo may only be republished with RNS-SAINT-SCENE, originally transmitted on Sept. 23, 2015.

More than one Latin American said they had missed seeing the pope in their home country so now was their chance.

One was Edwin Flores of Lanham, Md., a member of a Catholic church in Washington, D.C., who noted that he missed seeing John Paul II when he lived in El Salvador.

But for this Mass, “I won a ticket in church,” he said.

Ricardo Cordova of Springfield, Va., miniature yellow-and-white Vatican flag in his hand, said he wrote to his priest about his wish to see Francis. Ricardo Cordova of Springfield, Va., was able to attend Pope Francis’ first Mass in the U.S. on Sept. 23, 2015 after writing a letter to his priest. Religion News Service photo by Adelle M. Banks

“I’m from Bolivia,” said Cordova. “The pope went to my country a few weeks ago. I wasn’t there. I’m here, so I have a chance.”

People traveled from around the Washington, D.C., area and across the country to worship in person with Pope Francis.

“We have to enforce the Catholic faith to our children and see the pope,” said Sandra Garcia of Hyattsville, Md., as her mother, Blaca Garcia, held her infant son, Francisco Garcia.

Old and young welcomed the chance to see Francis in person. 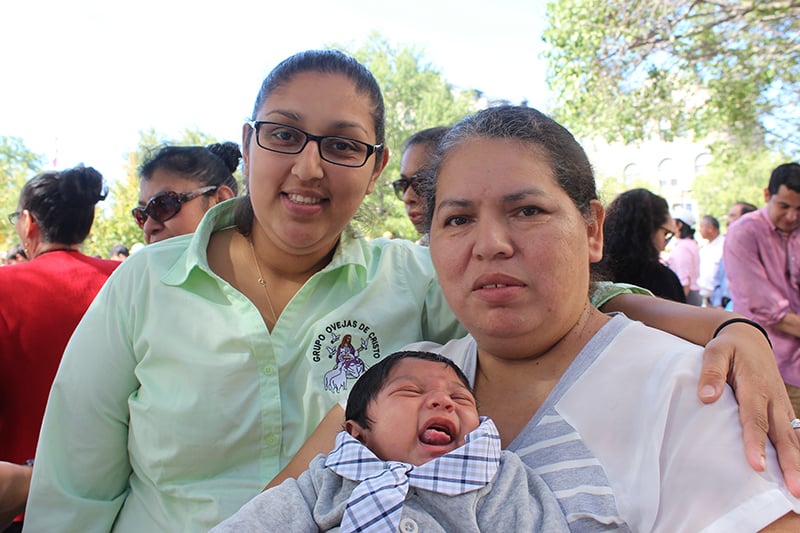 Sebastian Buelbas, 15, of Rockville, Md., said he awoke at 4:30 a.m. and was on one of the earliest trains of the Washington subway.

Raymona Robinson, 86, of Baltimore joined her daughter, Sharon Goods of Washington, at the papal Mass.

“I came to see the pope and to get a blessing hopefully,” said the member of St. Bernardine Church in Baltimore. She wanted to “be with everyone else who thinks like I do — admire the pope for all that he has done already and continues to do. He preached love and he has made me get a feeling of him thinking that everyone is equal. I admire that a lot.” 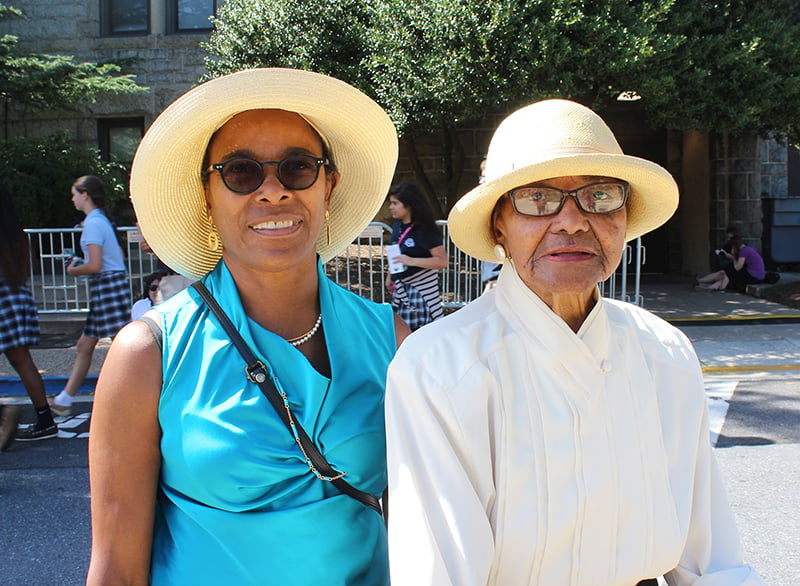 Members of a busload of seminarians from Mount St. Mary’s Seminary of the West said it was worth their trip from Cincinnati. Among them was Alexander Elfreich, in his first of seven years he plans to spend at the seminary on his way to the priesthood.

(David Gibson contributed to this report.)