Pope Francis celebrates Mass at the National Shrine of the Immaculate Conception for the Canonization Mass for Friar Junipero Serra in Washington on Sept. 23, 2015. Photo courtesy of REUTERS/Brian Snyder
*Editors: This photo may only be republished with RNS-POPE-SAINT, originally transmitted on Sept. 23, 2015.

WASHINGTON (RNS) Pope Francis canonized a controversial 18th-century Spanish missionary on Wednesday (Sept. 23), the first full day of his historic visit to the U.S. — but he made scant mention of the new saint, Junipero Serra, whom he has defended for protecting Native Americans.

Nor did he refer to the fact that the Mass — in Spanish — was also a celebration by the first Latin American pope in history of the booming Latino presence in the U.S. church.

Instead, in his homily at the outdoor Mass next to the the Basilica of the Immaculate Conception, the Argentine pontiff exhorted the Catholic Church and its followers to look ahead, to move forward and to go out into the streets to minister to the poor, the lonely and the needy, in order to bring salvation to all and to find joy for themselves.

“The holy and faithful people of God are not afraid of losing their way,” Francis told the crowd of 25,000 gathered under a bright, late afternoon sky. “They are afraid of becoming self-enclosed, frozen into elites, clinging to their own security. They know that self-enclosure, in all the many forms it takes, is the cause of so much apathy.

“The spirit of the world tells us to be like everyone else, to settle for what comes easy,” Francis said during the liturgy, the first Mass on this six-day visit to Washington, New York and Philadelphia. 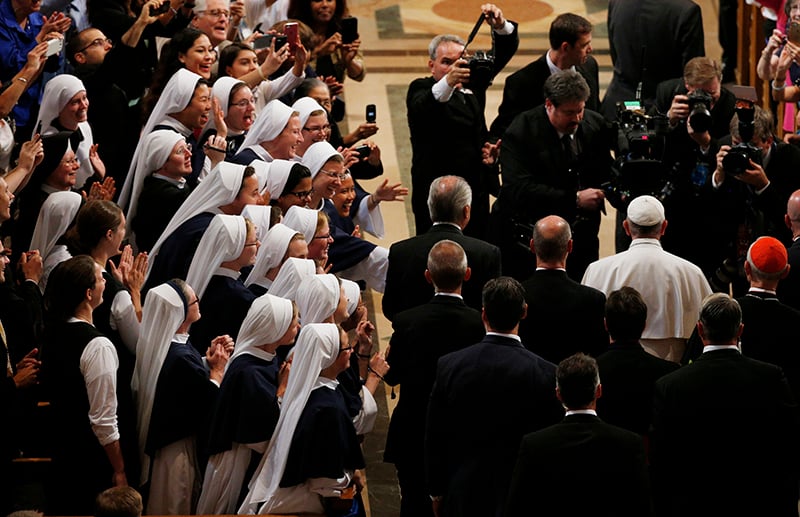 Pope Francis is greeted inside the Basilica of the National Shrine of the Immaculate Conception as he arrives for a Canonization Mass for Friar Junipero Serra in Washington on Sept. 23, 2015. Photo courtesy of REUTERS/Kevin Lamarque
*Editors: This photo may only be republished with RNS-POPE-SAINT, originally transmitted on Sept. 23, 2015.

He told his listeners that the antidote to the “glum apathy” and indifference that can settle in through one’s “daily routine” is to go out and find joy through helping others.

“Jesus did not provide a short list of who is, or is not, worthy of receiving his message, his presence,” Francis said, reprising themes of inclusion and service that have been hallmarks of his papacy. “Instead, he always embraced life as he saw it. In faces of pain, hunger, sickness and sin. In faces of wounds, of thirst, of weariness, doubt and pity.

“Far from expecting a pretty life, smartly dressed and neatly groomed, he embraced life as he found it. It made no difference whether it was dirty, unkempt, broken. Jesus said: Go out and tell the good news to everyone. Go out and in my name embrace life as it is, and not as you think it should be.” 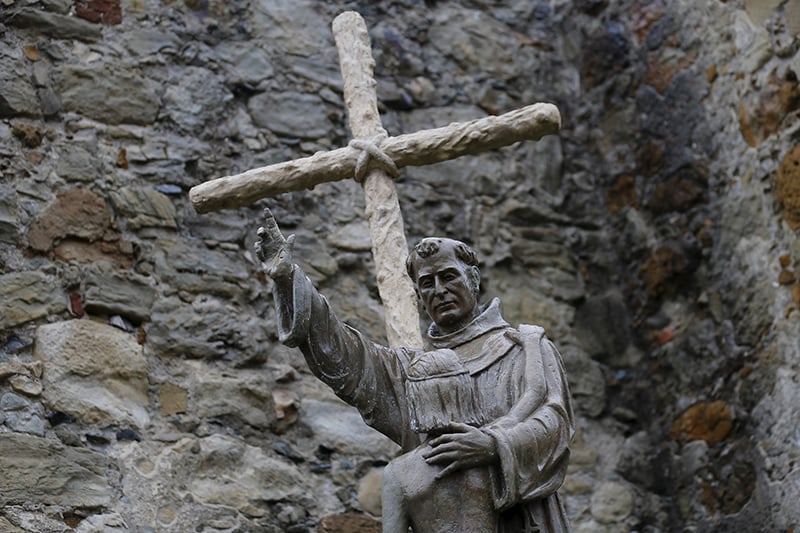 The pope then cited Serra (1713-1784), a Spaniard who is called the “Columbus of California” because he brought the faith to the West Coast, as “the embodiment of a church which goes forth, a church which sets out to bring everywhere the reconciling tenderness of God.”

Others strongly disagree: They say Serra was part of an imperial conquest that beat and enslaved Native Americans, raped their women and destroyed their culture by forcing them to abandon their traditional language, diet, dress and other customs and rites.

Add largely because of the diseases introduced by these Old World invaders, the original indigenous population of perhaps 300,000 was decimated by as much as 90 percent.

Francis, however, glided over those charges and said the Franciscan missionary “sought to defend the dignity of the native community, to protect it from those who had mistreated and abused it.” 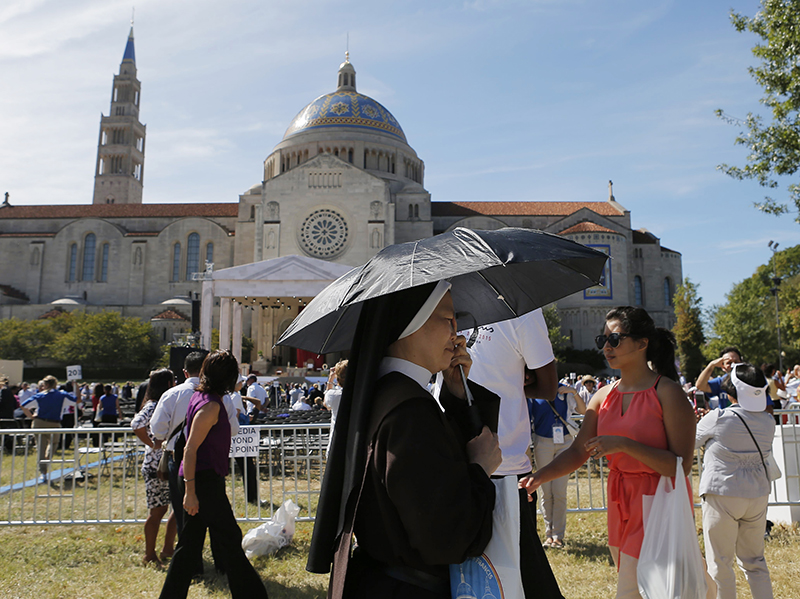 A nun shades herself with an umbrella before the Canonization Mass for Junipero Serra at the Basilica of the National Shrine of the Immaculate Conception in Washington on Sept. 23, 2015. Photo courtesy of REUTERS/Brian Snyder
*Editors: This photo may only be republished with RNS-POPE-SAINT, originally transmitted on Sept. 23, 2015.

“Mistreatment and wrongs which today still trouble us,” he added, “especially because of the hurt which they cause in the lives of many people.”

That was the closest Francis came to acknowledging the devastation wrought by the colonizers, and was nothing like the apology he issued to indigenous peoples in Bolivia in July, when he said that “many grave sins were committed against the native peoples of America in the name of God.”

The pope’s comments Wednesday were not enough for present-day representatives of Native American tribes and their allies, who did not want Serra honored at all.

“The church’s treatment of California Indians clearly sends the message that they believe that evangelizing is saintly behavior even if it means the destruction, domination and the stealing of land of indigenous people,” Valentin Lopez, chairman of the Amah Mutsun Tribal Band, said at a news conference Tuesday at a Washington ,D.C., church.

“It is as if we, the very people upon whom Serra’s historic record of evangelization was built, are no more alive to Francis than adobe bricks,” added Deborah Miranda, a member of the Ohlone-Costanoan Esselen Nation and a professor at Washington and Lee University in Virginia.

Norma Louise Flores, a spokeswoman for the Kizh Nation who started a Moveon.org petition, called Serra “an unworthy and ungodly saint.”

Almost forgotten in this controversy, and the pope’s focus on the church’s missionary mandate, was the fact that the Mass was an affirmation of the wave of Latino immigration that is transforming the American church.