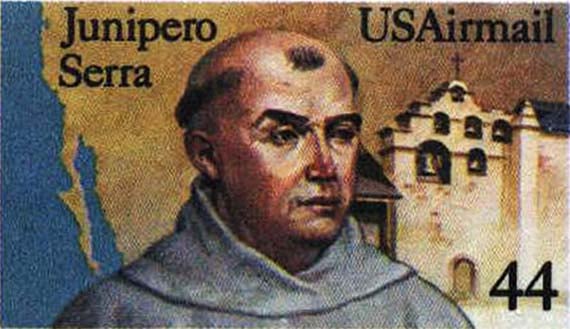 The outdoor, Spanish-language canonization Mass, scheduled for Sept. 23 at Washington’s National Shrine of the Immaculate Conception, also highlights the Vatican’s sometimes contradictory standards for sanctity when it comes to European missionaries.

Over the millennia, the Vatican has used the sainthood process pragmatically, sending symbolic, targeted messages to the church at large through those it canonized.

So, for example, it has singled out candidates who were martyred for the faith, as well as those who lived lives of chastity. As pope, St. John Paul II, a great proponent of this initiative, continued that tradition, taking pains to emphasize the holiness of non-European figures and beatifying those candidates on papal visits to their homelands.

Now it is Francis’ turn.

Without question, Serra (1713-1784) was an agent of empire, literally carrying the cross that accompanied the sword of Spanish conquest along North America’s West Coast.

For decades, Serra has been criticized for being part of a system that seized the Indians’ choice California farmland for his Franciscan order.

He and priests under his leadership then compelled these Native Americans to build and support a series of picturesque missions along the California coast. Incidentally — and unintentionally — the Spanish carried with them devastating diseases that dramatically reduced the native population.

Serra and other missionaries were also accused of heavy-handed conversions. The Spanish Franciscans were stalwart conservative shock troops of the Counter-Reformation who saw it as their duty to defend orthodoxy. The friars compelled the Indians to give up aspects of their culture, ranging from veneration of nature to wearing particular dress to divorce. Statue of Junipero Serra, the 18th-century Spanish priest and founder of the California Missions, taken May 17, 2015, in a garden at the Mission San Jose in Fremont, Calif. Religion News Service photo by Adelle M. Banks

Once baptized, they were not permitted to leave the missions. When they did, they were forcibly returned in chains and subjected to flogging. (To be fair, Serra and his fellow friars subjected themselves to flagellation as a form of mortification of the flesh.)

Serra’s defenders say that he loved the Native Americans under his charge and that he took pains to defend them from the predations of Spanish soldiers and colonists, in particular from sexual exploitation. Moreover, they say it is unfair to judge his conduct by contemporary standards.

Yet others in the Catholic Church have maintained over the years that the measure of sainthood candidates is whether they were able to see beyond the centuries in which they lived. There is some question about whether Serra, who had been a university professor in Majorca before becoming a missionary in the New World, met the highest moral standards of his own century, let alone those that came after.

Bartolome de Las Casas was a 16th-century Dominican appointed by the church as “protector of the Indians,” who wrote extensively on the subject, including “A Short Account of the Destruction of the Indies.”

Las Casas defended Indian rights and opposed coercive conversion practices, as well as the Indians’ slavery and forced labor under Spanish colonialists on estates called “encomiendas.” For his troubles, the landlords had him recalled to Spain, where he continued to argue for humane treatment of Native Americans. In 2000, the Vatican began an effort to make Las Casas a saint, despite his support for African slavery in the New World.

It is difficult to imagine that Serra, the former college professor who corresponded regularly with church officials in Mexico City and Spain, was unaware of the writings of Las Casas. And yet there is no evidence that Serra incorporated Las Casas’ progressive view in his own ministry.

On July 9 of this year, while on a papal visit to Santa Cruz, Bolivia, Pope Francis apologized for the actions of priests like Serra.

In this, he echoed John Paul II’s 2000 and 2001 apologies to indigenous people for previous missionary abuses.

READ: What some papal pundits get wrong about the polls — and why

Romero was assassinated while serving Mass — largely because he stood in opposition to El Salvador’s rightist regime and death squads.

The Romero beatification was personally resonant for Francis, a Jesuit from Argentina. When the pontiff was elected in 2013, he was criticized in liberal Catholic circles for remaining largely silent during his native Argentina’s “dirty war” of the 1970s, in which leftist churchmen and women were kidnapped and killed by the country’s military rulers. Since then, however, he has distinguished himself as a liberal force on issues such as global climate change.

So why did Francis intervene in Serra’s sainthood cause — dispensing with the required second miracle attributed to his intercession — to speed this week’s canonization?

Some have suggested that it is a message to the faithful endorsing modern evangelism. Others believe it is an acknowledgment of the importance of Spanish-speaking and Latin American Catholics.

Whatever the rationale, in making Serra a saint the church will not be venerating a man — however admirable in his motivation, his life and his works — who saw beyond his time, at least not when it comes to Native Americans.

(Mark I. Pinsky covered the sainthood campaign on behalf of Junipero Serra, from Rome and California, for the Los Angeles Times in the 1980s.) 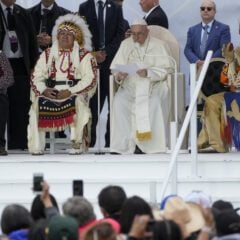