(RNS) “Papal-mania” is officially upon us and appears unstoppable as the U.S. prepares to welcome Pope Francis on Tuesday (Sept. 22) for a six-day visit.

On Twitter, #popeapocalypse is trending, while residents of Washington, New York and Philadelphia fret over crowding, traffic and security as the pontiff’s trip draws near.

John Boehner, the Republican speaker of the U.S. House of Representatives, will introduce Francis at the first-ever papal address to a joint meeting of Congress, and Bill de Blasio, New York’s Democratic mayor, will also welcome the pope with open arms.

Yes, popes have been visiting the U.S. since Paul VI spent a day in New York in 1965, and each of the following eight papal trips — seven by John Paul II and one by Pope Emeritus Benedict XVI — has been widely anticipated, and enormously successful.

Is it far-fetched to think this could be any different this time — that images of a beaming Roman pontiff taking in the local flavor would not lead to a surge of warm feelings toward a Catholic Church otherwise regarded as beleaguered and out-of-touch? 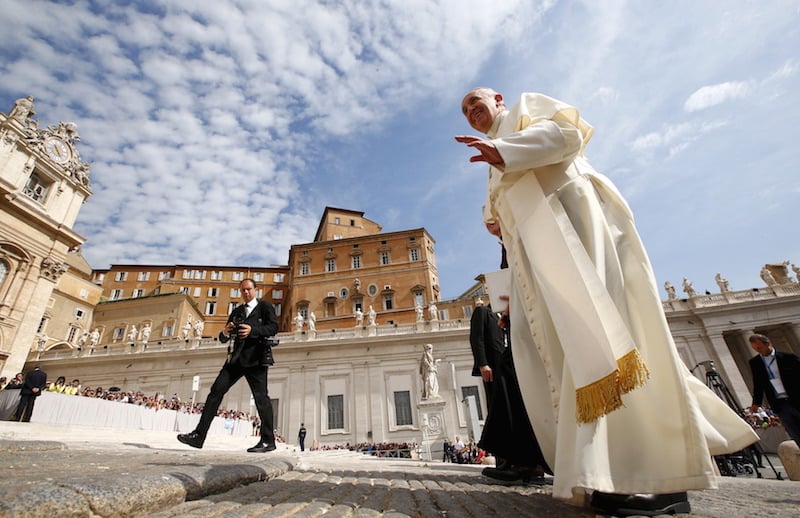 Pope Francis gestures as he arrives to lead his Wednesday general audience in St. Peter’s Square at the Vatican on May 20, 2015. Photo courtesy of REUTERS/Tony Gentile *Editors: This photo may only be republished with RNS-GUSHEE-COLUMN, originally transmitted on September 16, 2015.

Yet at a moment of such excitement and goodwill, it is important to remember how unusual this trip is in the context of American history: The idea that a pope could arrive in the United States to fanfare and adulation, especially from leading American politicians, was once unthinkable.

Consider the case of Archbishop Gaetano Bedini, a representative of Pope Pius IX whose 1853 U.S. tour wrought an assassination plot and sparked violence in Cincinnati streets that led to one protester’s death and forced Bedini to flee the country under cover of night. Such extreme reactions grew from Bedini’s close association with his imperious boss, the pope, who denounced democratic government, religious liberty and all of “modern civilization.”

These suspicions aren’t entirely gone: Think of the worries of some about the preponderance of Catholics — six of the nine — who sit on the U.S. Supreme Court. Will they rule as Catholics, or as Americans?

But it wasn’t just Catholic beliefs and dogmas that unsettled many Americans.

Through most of U.S. history, native-born white Protestants nursed an intense distrust for Catholics, who tended to be of immigrant stock. Along with the stubborn conviction that a succession of popes planned to topple the American experiment in self-government and impose the Catholic faith upon the entire population, this ethnic distrust formed the core of anti-Catholicism.

For example: In Philadelphia, where upward of a million people are expected to fill the streets for an open-air Mass that Francis will celebrate, the story line was quite different in the 19th century. Back then, nativists burned Catholic churches and urged mobs to defend themselves from “the bloody hand of the pope.”

As a historical fixture in American culture, anti-Catholicism not only made the idea of papal visits inopportune; it also made any association with the papacy a serious liability.

As a candidate in 1960, John F. Kennedy, the first Catholic to be elected president, found it necessary to stand before hundreds of Protestant ministers and formally pledge not to accept marching orders from the Vatican.

Given such history, it’s no surprise that the first papal trip to the United States happened only in 1965, during the closing act of the Second Vatican Council, the gathering of Catholic bishops from across the globe that would affirm democratic government and bring the church into closer alignment with modern civilization.

In the 13 brief hours between his arrival and return flight home, Pope Paul VI managed to captivate America, gathering what The New York Times called the largest conglomeration of news media to that time in history and pre-empting all normal television programming.

Now it’s Francis’ turn. With some 8,000 journalists officially accredited to cover the visit, and untold numbers of bloggers and tweeters ready to amplify every utterance and image, Francis has a chance to tell Americans what the Catholic Church really teaches on a range of issues.

Indeed, this pope has made no bones about his intent to influence the conversation leading up to the U.N. Conference on Climate Change set to open in late November in Paris. He’ll almost certainly approach his addresses to Congress and the U.N. as a two-part barnburner on the environment, using his disarming touch to drive home the challenging vision of Laudato Si’, his encyclical on humanity’s responsibility to care for creation.

Francis surely expects raspberries from climate-change deniers and business leaders — many of them Catholics — who take issue with the pope’s robust critique of capitalism. But he seems intent on delivering a message he believes is on the right side of history, and theology.

Given his prominent role at the World Meeting of Families in Philadelphia, it’s anyone’s guess whether Francis will say anything as notable as his 2013 “Who am I to judge?” comment — referring to gays and lesbians who seek a rich spiritual relationship with God.

But the most historically evocative aspect of Francis’ American tour may be his intense identification with the nation’s immigrants.

This first Latin American pope — himself the son of immigrants who fled to Argentina from Italy — will deliver many of his remarks in Spanish and will bless a group of 150 undocumented immigrants and refugees in New York.

Francis said he had hoped to enter the U.S. via Mexico to send a message about the need for America to treat immigrants better, but he had to settle for arriving from Cuba, another powerful statement. 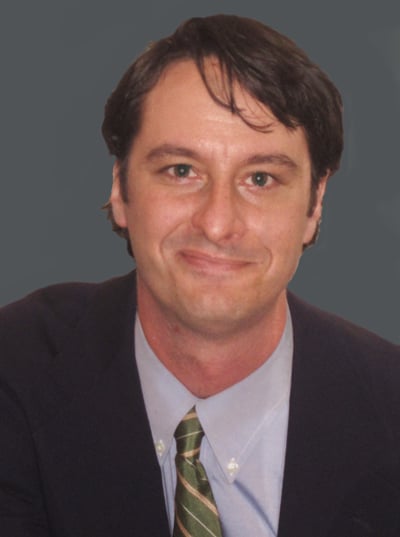 James P. McCartin is a historian and director of the Fordham Center on Religion and Culture. Photo courtesy of James McCartin

The visit will do more than anything to announce that the Catholic future in America is Latino, yet it comes at a time when immigration angst is roiling the country; and more than a few of the most outspoken foes are themselves Catholic, and come from the very ethnic communities that were once reviled by the nativists.

A Latino pope speaking in Spanish may not set off the same alarm bells and stir those dark visions of political Armageddon that recall the anti-Catholic imagination in an earlier era. But the reactions to Francis and his demands for change may prove a new test of whether America’s tolerance for papal teaching has definitively changed — and whether his own flock is part of the problem, or the solution.

(James P. McCartin is a historian and director of the Fordham Center on Religion and Culture.)