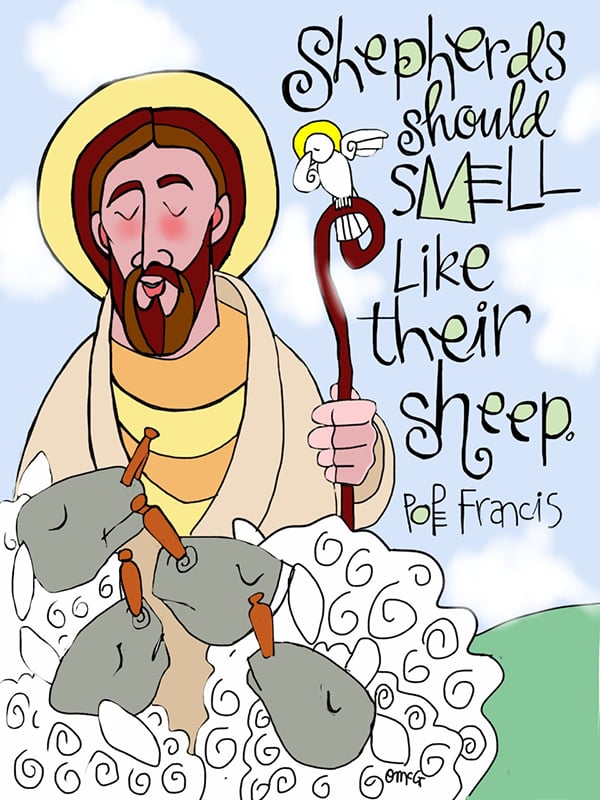 Catholic artist Brother Mickey McGrath’s latest book, “Dear Young People … ,” was inspired by the quotes of Pope Francis, such as “Shepherds should smell like their sheep.” Photo courtesy of Michael O’Neill McGrath

“Even fans who are not Catholic say ‘I love your pope,’” noted McGrath, an artist, author and speaker known as “Bro. Mickey.”

McGrath, a religious brother in the order Oblates of St. Francis de Sales, illustrates some of his favorite Francis quotations and tweets and shares some reflections in his latest book, “Dear Young People … Inspiration from Pope Francis for Everyone,” published by World Library Publications.

READ: The quotable Pope Francis: He has a way with words

The title is taken from the pope’s Twitter feed, where he often addresses young people, such as in this Jan. 27, 2014, tweet that McGrath illustrated in the book:

“Dear young people, let us not be satisfied with a mediocre life. Be amazed by what is true and beautiful, what is of God!”

Dear young people, let us not be satisfied with a mediocre life. Be amazed by what is true and beautiful, what is of God!

McGrath thinks many of the pope’s tweets show “the joy of knowing it’s all about how to live with the struggles in our world in a way that registers peace and self-awareness.” 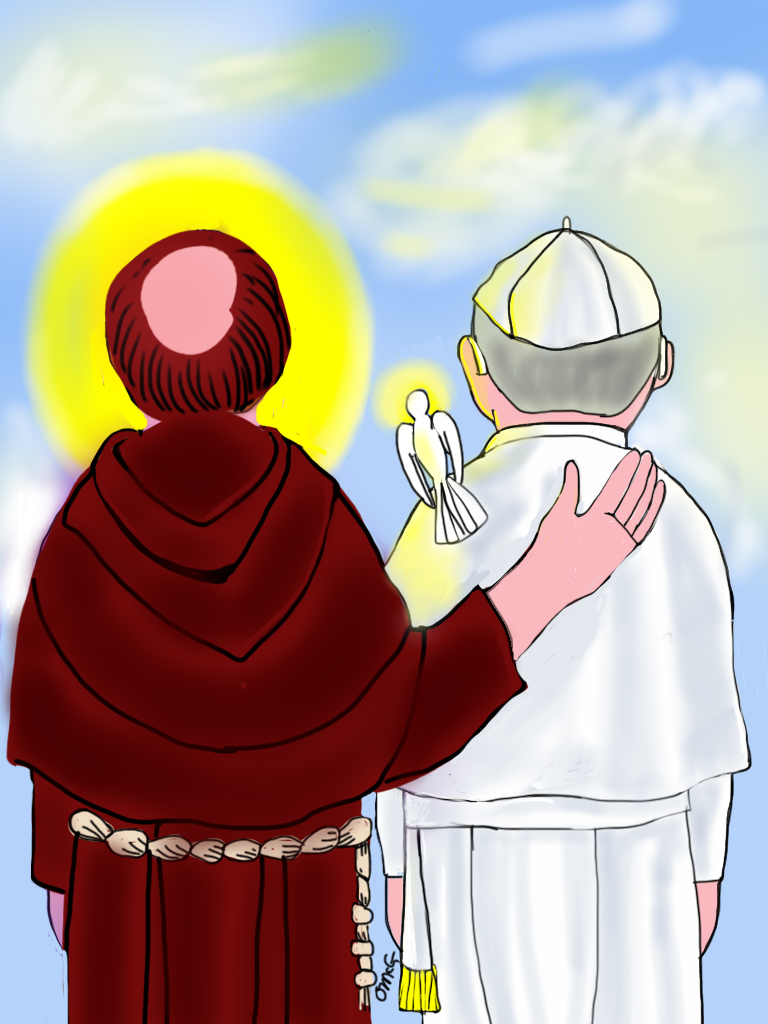 Other favorite quotes in the book, illustrated with gentle humor, include “Shepherds should smell like their sheep.”

McGrath’s illustration shows a smiling shepherd — possibly the Good Shepherd himself — whose sheep have clothespins on their noses. The Holy Spirit, depicted as a little white dove, is holding its nose, er, beak, as well.

“I love the Holy Spirit. That’s where our creative inspiration comes from,” McGrath said.

“That little dove has become my reminder of that,” he added.

It’s also become something of a trademark and makes frequent cameos in McGrath’s pieces.

Pope John XXIII, canonized last year, “introduced the Holy Spirit to the world,” McGrath said. Before John’s papacy (1958-1963), it was always “the Holy Ghost, and just bishops and priests had access.” 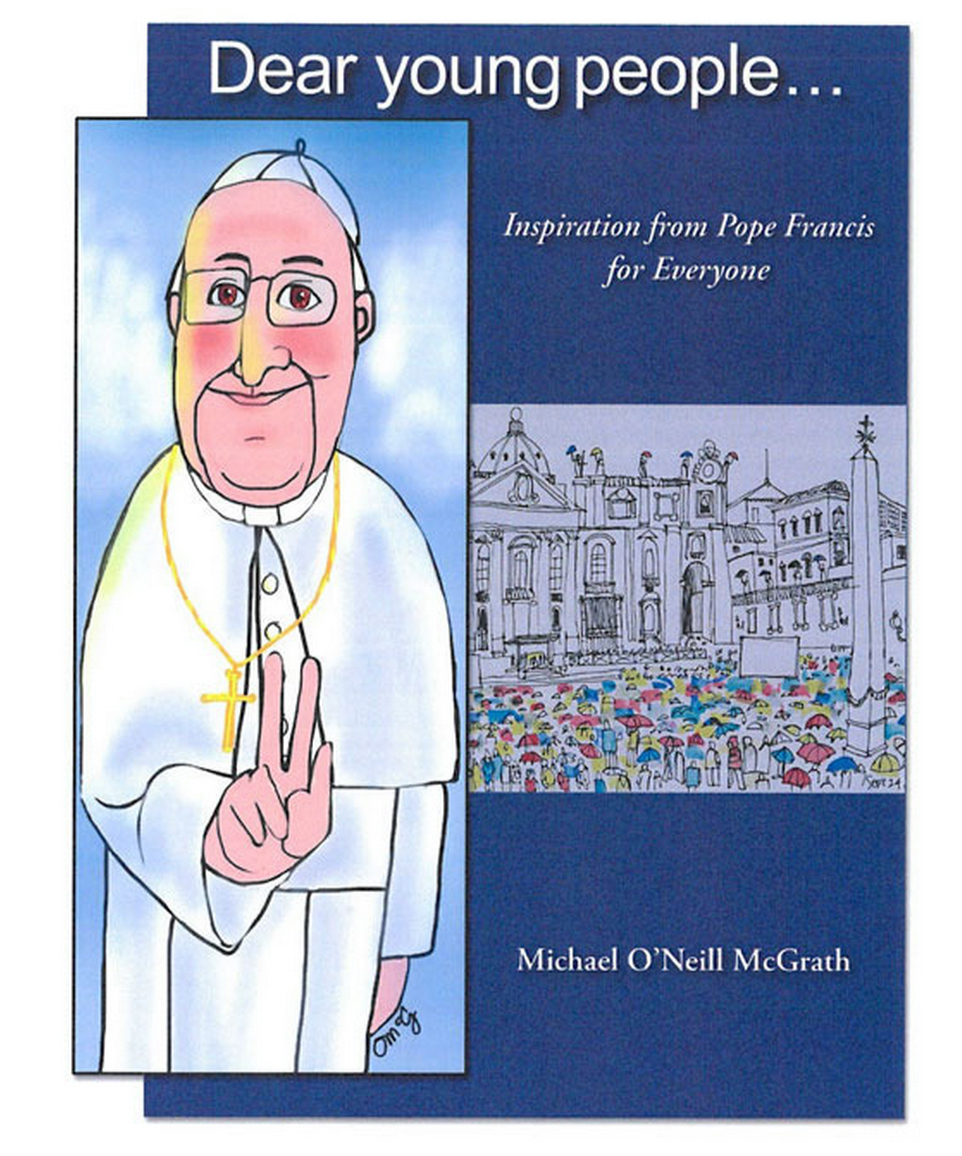 Pope Francis, McGrath said, seems to show the same “joyful optimism” as Pope John and Francis de Sales, the founder of McGrath’s order.  (De Sales has been called “the other St. Francis” — especially since Pope Francis took his name from St. Francis of Assisi.)

McGrath said he went to Rome and was in Pope Francis’ audience in St. Peter’s Square. When the pope “passed right in front of us with a smile on his face,” McGrath said, it was “a sacred moment.”

And of course that reminds him of another favorite Francis quote:

“I cannot imagine a Christian who does not know how to smile. May we joyfully witness to our faith,” Pope Francis said on Jan. 30, 2014.

McGrath said he believes the pope “is going about things the right way; it’s about changing hearts.”

As an artist, McGrath said he also appreciates that Francis “is calling us to our contemplative side, and reverence for nature.” McGrath’s next project, a 2016 calendar/coloring book for adults, will focus on “Green Saints and Mystics.”

“So many people feel cut off by the church, or unwelcome. We teach people all the rules and regulations, but not how to have a relationship with Jesus,” he said.

“I’m one of those who feels strongly that we’re being cut off from our wholeness,” he said. People need to “locate that sense of inner peace and serenity that can only come when we honor the contemplative side of things.”