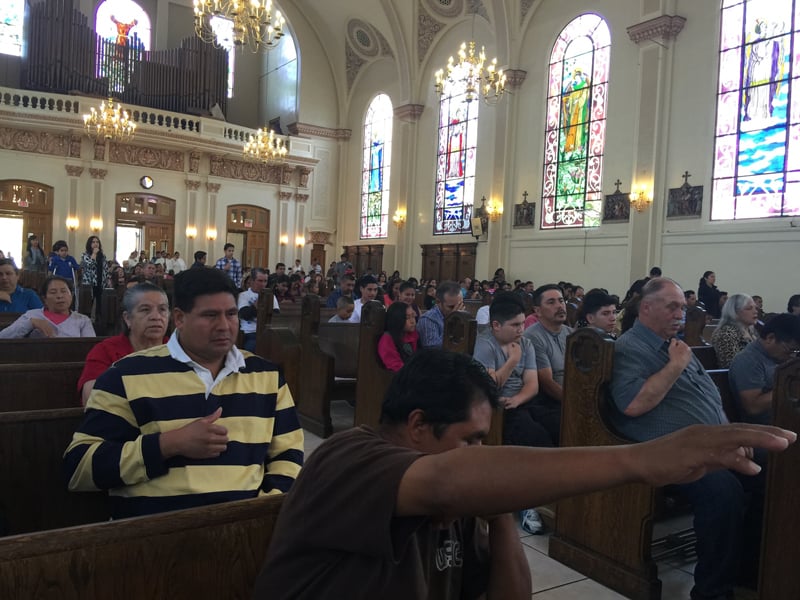 WASHINGTON (RNS) On the day Pope Francis comes to the National Mall, his first morning greeting the American public, Hispanic Catholics from miles around will flood into downtown Washington churches for 6:30 a.m. Mass.

Then they’ll walk to the Ellipse together to witness the first Latin American pontiff when he takes a popemobile spin around the Mall and the Ellipse.

“You will see a huge river of Hispanics coming from all directions to gather as one flock to celebrate, to rejoice, to make fiesta because Pope Francis is with us,” said the Rev. Evelio Menjivar, of Our Lady Queen of the Americas Catholic Church, at a media briefing.

And the Argentine-born pope will speak their language. All but four of his 18 addresses planned for the U.S. visit, including his address to the United Nations and all his homilies, will be in Spanish. A highlight of his stop will be the Mass where Francis will canonize Spanish-born missionary Junipero Serra, the Franciscan priest who established mission churches in the Southwest.

Today, Hispanics are 34 percent of U.S. Catholics, according to the Public Religion Research Institute. More people identify as both Hispanic and Catholic nationally (9 percent of U.S. adults according to PRRI) than there are Methodists, Lutherans and Episcopalians added up in a Pew Research Center survey. More significantly, Hispanics are the face of the church’s future in America.

READ: Papal Mass in Washington will be in Spanish

Fifty-seven percent of Hispanics in the U.S. identify as Catholic. Hispanics also have a higher retention rate -- people reared in the Catholic faith who stay in the faith -- than non-Hispanic Catholics. It's 71 percent compared to 61 percent, according to the Catholic research agency, the Center for Applied Research in the Apostolate.

They’re significantly younger than the non-Hispanic U.S. population -- 42 is the median age for Hispanic Catholics adults, compared to 53 for non-Hispanic white adults, according to Pew Research. Francis may not see the full extent of Hispanics' U.S. influence during his three-city visit to the East Coast, but Hispanics dominate the Catholic population in five southwestern states -- Arizona, California, Nevada, New Mexico and Texas, according to the American Values Atlas from PRRI.

One in four U.S. parishes hold Masses in Spanish, but the impact of Hispanics can’t be measured by attendance at church, said sociologist Mary Gautier, a senior researcher at CARA.

“Immigrant Hispanics have a different culture and lived reality” than the descendants of European immigrants who comprised most of U.S. Catholics until recent decades, said Gautier.

“These immigrants come from places with 8,000 Catholics per priest. Here in the U.S., they are probably working multiple jobs, Saturday nights and Sunday mornings. If the only Spanish Mass is when they are working the shift at Target, they’re not going to be there. But they’re still Catholic,” she said.

And their concerns, including social and economic justice and immigration reform, are high on Pope Francis’ agenda. 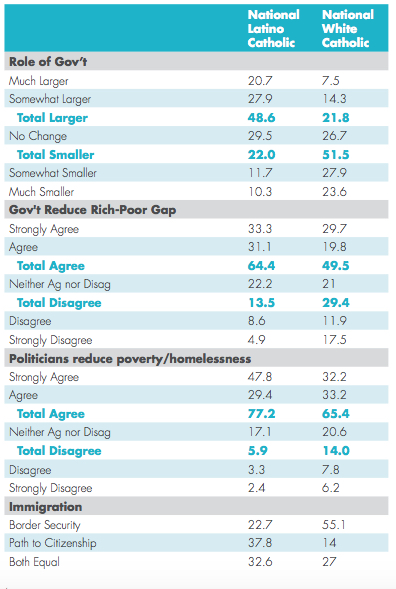 The nonprofit group Faith in Public Life found sharp splits between Hispanic and non-Hispanic Catholic voters on the role of the government in economic life and on immigration in a survey released Sept. 16, 2015. Graphic courtesy of David Buckley.

The nonprofit group Faith in Public Life found sharp splits between Hispanic and non-Hispanic Catholic voters on the role of the government in economic life and on immigration. A survey released Sept. 16 showed:

But Menjivar said Francis is coming to speak to everyone, not only Hispanics. He'll arrive on Tuesday (Sept. 22) after a stop in Cuba with a message to Americans and the world, said the priest.

"Pope Francis embodies the culture of encounter," he said, "the church without borders where no one is a stranger." 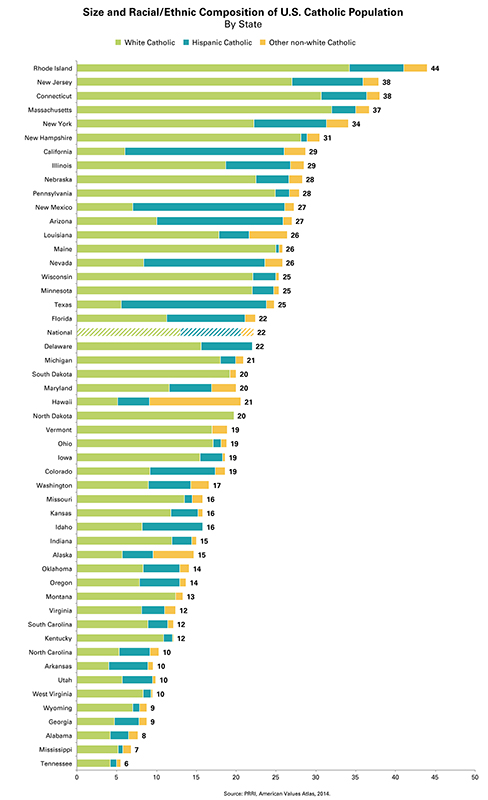 Related Posts
By Emily McFarlan Miller
To cope with pandemic, Americans choose binge-watching TV over the Bible
By Amy Klein
What good is faith when your fertility treatments aren't working?
By Claire Giangravé
Seven years later, still no trace of Jesuit priest kidnapped in Syria
By Claire Giangravé
Top Vatican investigator on sex abuse says church must empower victims
By Claire Giangravé
In video, Cardinal Pell details his time in prison before being cleared in abuse case