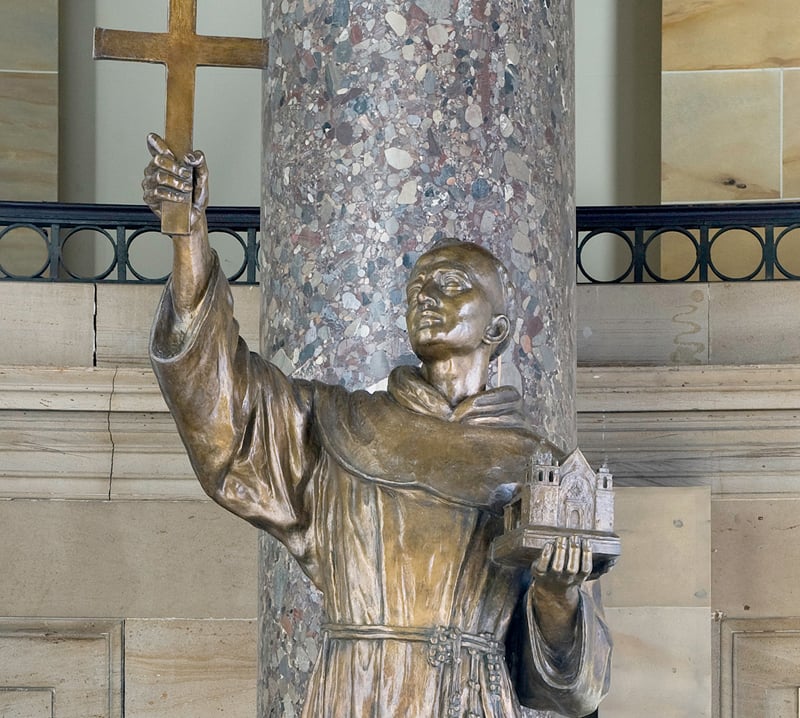 (RNS) If Pope Francis’ powerful denunciation of the global economic system was the heart of his talk to Bolivians on Thursday (July 9), his apology to the indigenous peoples for the “grave sins” committed by the church provided the lead for much of the coverage.

That’s not surprising: The exploitation of the natives in Latin America by Catholic missionaries who arrived along with the colonial conquerors of the European monarchies, especially Spain, was well-documented, and brutal.

But his apology and explanation foreshadow a key dynamic of his first visit to the U.S. in September — the canonization of the Rev. Junipero Serra, the Spanish Franciscan who helped establish the mission system in California. And he offered a different way of looking at sin and sanctity.

Speaking in Bolivia, the second stop on the three-nation “homecoming” tour for the Argentine pontiff, Francis denounced the “new colonialism” of global capitalism that is exploiting the poor and favoring the rich.

But he went on to say:

That is a powerful statement, and delivered in Bolivia, whose people suffered so much colonial depredation.

But Francis’ off-the-cuff follow-up was just as interesting, given that he will be facing the same issue when he canonizes Serra at an outdoor Mass in Washington on the first full day of his five-day visit.

Serra has long been criticized for personally mistreating indigenous people (a claim many contest), or for being part of the Spanish imperial enterprise that brought devastation and disease to Native Americans, along with the gospel. They say there is no way Serra should be declared a saint, and there are efforts to have his statue removed from the U.S. Capitol, where it is one of two statues representing the state of California.

Defenders say Serra actually worked to mitigate the excesses of the Spanish forces against the Native Americans, and that he should not be judged by present-day standards.

That was the point Francis hit in his impromptu additions on Thursday:

“I also would like us to recognize the priests and bishops who strongly opposed the logic of the sword with the strength of the cross. There was sin. There was sin, and in abundance, and for this we ask forgiveness. But there as well where there was sin, where there was abundant sin, grace abounded, through these men who defended the justice of the native peoples.”

Will Americans accept such a nuanced view when it comes to Junipero Serra?

Can Catholics begin to view their faith beyond the polarities of all good or wholly terrible?

Saints are often seen as plaster icons of piety rather than flesh-and-blood Christians who made mistakes as well as pursuing holiness, for themselves and others.

A good part of that blame can be laid at the door of the church, whose canonization process has too long focused on elevating the unblemished, or seeking to scrub away any stains that might darken a prospective saint’s image.

Francis’ approach seems far more realistic, both about sin and saints. But is it simply a different way of explaining away the sins of people like Serra? Does it resolve the question of whether Serra should be made a saint? Can anyone qualify? Even the late Mother Teresa, who is a still a step away from formal sainthood, has her vocal critics.

The Catholic Church is seen as more concerned with elevating its reputation than acknowledging its failings. Hence the fascination with Francis’ mea culpa, almost more than his “revolutionary” manifesto for sweeping structural reforms of the global financial system.

Yet for decades, especially since John Paul II — who established a veritable “theology of apology” — popes have been making efforts to confess the church’s sins.

The next step, one Francis is trying to take, is to lift notions of sin and sanctity — and religion itself — above the lower realm of simple black and white judgments.

Those either/or verdicts are a kind of fundamentalism, forcing a blinkered acceptance of everything as good or a puritanical rejection of the whole because it is polluted by one failing or another — shortcomings that are the very reason for the church’s existence, and the pilgrimage of holiness.