U.S. President Barack Obama listens as Pope Francis speaks during an arrival ceremony for the pope at the White House in Washington on September 23, 2015. The pontiff is on his first visit to the United States. Photo courtesy of REUTERS/Jonathan Ernst
*Editors: This photo may only be republished with RNS-POPE-OBAMA, originally transmitted on Sept. 23, 2015.

WASHINGTON (RNS) In his first remarks on American soil, Pope Francis on Wednesday (Sept. 23) signaled the balance he might strike during his highly charged visit this week, telling President Obama and a huge crowd on the South Lawn of the White House that the U.S. must safeguard religious freedom while also stressing the “urgency” of addressing climate change and praising the president’s environmental policies.

The first issue, religious freedom, is one that is dear to the American bishops, who have made it the chief means by which they are trying to fight back against issues such as gay marriage and the mandate for health insurers to cover contraceptives.

Francis said that American Catholics are committed “to building a society which is truly tolerant and inclusive, to safeguarding the rights of individuals and communities, and to rejecting every form of unjust discrimination.”

He tied that effort to protecting religious liberty, which “remains one of America’s most precious possessions,” and said that “all are called to be vigilant, precisely as good citizens, to preserve and defend that freedom from everything that would threaten or compromise it.” 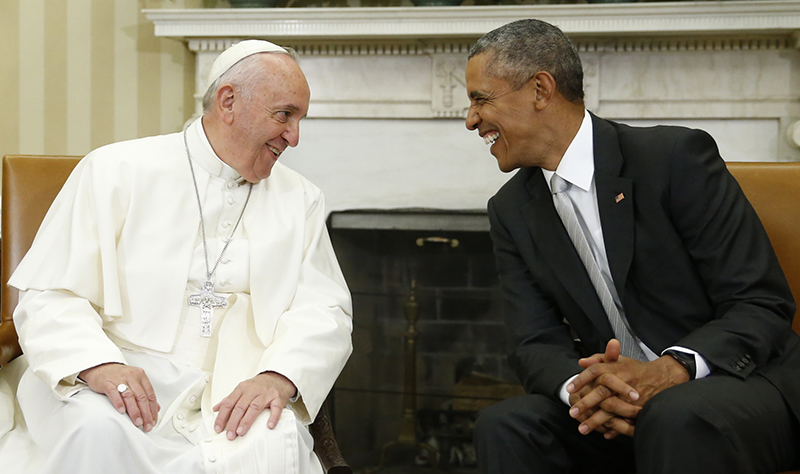 U.S. President Barack Obama meets with Pope Francis in the Oval Office of the White House in Washington on September 23, 2015. The pontiff is on his first visit to the United States. Photo courtesy of REUTERS/Jonathan Ernst

Francis backed up his words, and the bishops, later that day when he paid a visit to a local community of the Little Sisters of the Poor, the religious order that is involved in a contentious legal battle with the Obama administration over the order’s refusal to comply with an accommodation to provide contraceptive coverage to its employees. The order operates 30 homes for the aged and dying in the U.S.

The case may end up at the U.S. Supreme Court.

Protecting the environment, on the other hand, is an issue that is central to Francis’ ministry. He made it the focus of a major document he published this year, one that prompted fierce criticism from many conservatives, especially in the U.S.

In his remarks on Wednesday — which he delivered in English, a language the Argentine native is hesitant to speak in public — Francis made it clear that he would not be deterred by the pushback.

Speaking on a sparkling early fall day, he told Obama that he was pleased by the president’s efforts to reduce air pollution and he invoked civil rights icon the Rev. Martin Luther King Jr. in support of his cause. “We can say that we have defaulted on a promissory note,” he quoted King as saying, “and now is the time to honor it.”

“Accepting the urgency, it seems clear to me … that climate change is a problem which can no longer be left to a future generation,” Francis said, citing his landmark encyclical from June, “Laudato Si’.” “When it comes to the care of our common home, we are living at a critical moment of history. We still have time to make the changes needed to bring about a sustainable and integral development, for we know that things can change. 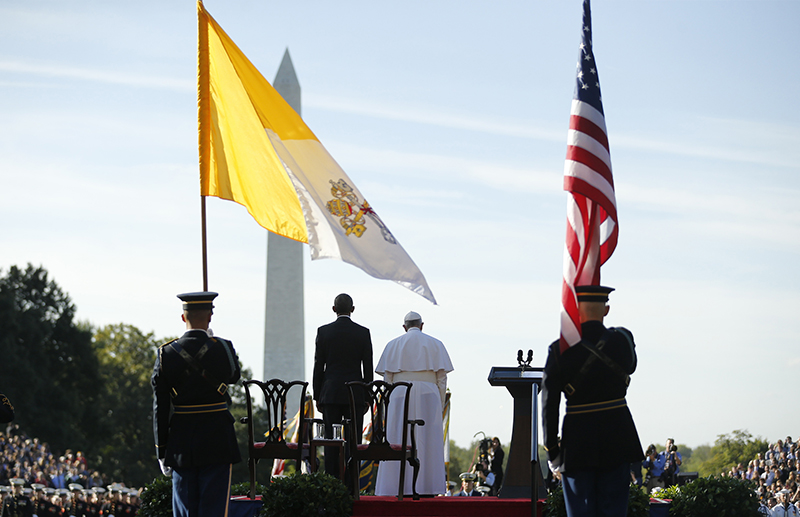 U.S. President Barack Obama welcomes Pope Francis during a ceremony at the White House in Washington on Sept. 23, 2015. Photo courtesy of REUTERS/Jonathan Ernst *Editors: This photo may only be republished with RNS-POPE-OBAMA, originally transmitted on Sept. 23, 2015.

“Such change demands on our part a serious and responsible recognition not only of the kind of world we may be leaving to our children, but also to the millions of people living under a system which has overlooked them,” the pontiff said, one of several lines that drew applause from a crowd of 15,000 that was clearly friendly to Francis’ priorities.

“Our common home has been part of this group of the excluded, which cries out to heaven and which today powerfully strikes our homes, our cities, our societies.”

Click on logo to read more Religion News Service coverage of Francis in the U.S.

Francis also seemed to nod to the breakthrough in diplomatic relations between the U.S. and Cuba, which he helped broker and which he celebrated by visiting the communist island for three days before arriving in the U.S. capital on Tuesday afternoon for a six-day visit to Washington, New York and Philadelphia.

In his remarks, Obama also highlighted the breakthrough with Havana, and he said that Americans also “cherish religious liberty.”

But he then shifted it to the international context, noting that “around the world at this very moment, children of God, including Christians, are targeted and even killed because of their faith. Believers are prevented from gathering at their places of worship. The faithful are imprisoned. Churches are destroyed.”

“So we stand with you,” Obama continued, “in defense of religious freedom and interfaith dialogue, knowing that people everywhere must be able to live out their faith free from fear and intimidation.”

Francis has frequently decried the religiously inflected violence that is racking so many regions of the world, but especially the Middle East, where he has said the minority Christian populations are being targeted in a “persecution” that is “creating more martyrs in the church today than there were in the first centuries” under the Roman Empire.

Obama has often been criticized for not speaking out strongly enough or acting firmly enough to end such violence, or to highlight the anti-Christian nature of the violence, and his remarks Wednesday were some of his strongest on the issue.

The president also welcomed the pope’s words on the environment, and he noted that Francis was the first Latin American pope ever.

Francis also spoke about how he was the son of Italian immigrants who fled to Argentina and that he was “happy to be a guest in this country, which was largely built by such families” — a nod to his expected focus on another hot-button political issue, immigration reform.

But Obama spent the bulk of his time praising Francis as an example of Christian mercy and humility, a defender of the poor and powerless and a reminder of the American Catholic tradition of putting faith into action — in other words, highlighting the qualities that have made Francis a religious celebrity whose broad popularity has given him tremendous sway in the nation’s capital, where poll numbers equal influence.

Francis will have a further chance to draw on that popularity when he speaks to a joint meeting of Congress on Thursday, the first pope in history to do so, and one who faces a House and Senate with more Catholics than ever, but with many, especially Republicans, who strongly oppose his views.

Much of the media coverage ahead of this White House meeting turned on conservative criticism over a dozen or so guests in the crowd who were gay Catholics or LGBT activists, and the presence of a nun, Sister Simone Campbell, who works for social justice. Critics on the right saw those invitations as a sign of disrespect to the pope by the White House.

The Vatican said there was no problem with the guest list and there was no hint of any discord as the pope and the president went directly inside the White House after giving their speeches for a private meeting.