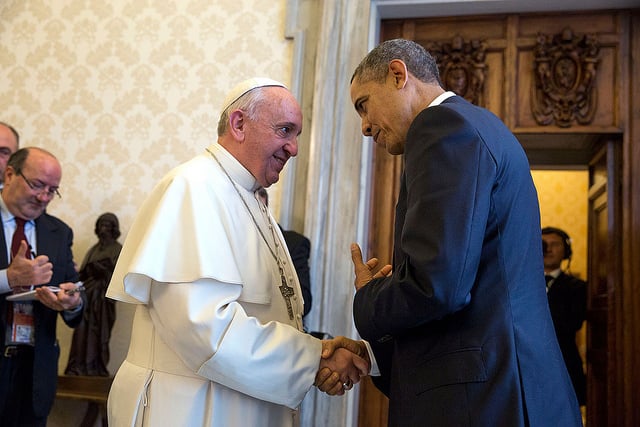 (RNS) President Obama met Pope Francis at the Vatican and Wednesday (Sept. 23) will welcome him to the White HouseOfficial White House Photo by Pete Souza.

(RNS) Do we have our first full-blown diplomatic incident marring the carefully orchestrated visit of Pope Francis to the U.S.?

Did the Obama White House muff what should have been a slam dunk in welcoming the pontiff to what is essentially a Washington photo op?

It sure sounds that way judging by the conservative outrage over White House invitations to a number of gay Catholics and LGBT advocates, an openly gay Episcopal bishop and a nun who is a prominent social justice activist.

They are among the nearly 15,000 people taking part in a reception for Francis on the South Lawn on Wednesday (Sept. 23) before his private meeting with the president.

But these particular guests are “a rogue’s gallery” of dissenters and their inclusion is “a stunning show of political indecorum” designed to “test just how far Pope Francis’ notorious tolerance will go,” Thomas Williams wrote last Wednesday (Sept. 16) on the right-wing news site Breitbart.com.

In his article, Williams — who left the priesthood to marry a woman he was having an affair with — described Sister Simone Campbell, one of the guests, as the “pro-abortion executive director of the social justice lobby NETWORK.”

Campbell, who is known as the organizer of the “Nuns on the Bus” tours, says she is “pro-life, not just pro-birth.” She has also said that while her work does not focus on abortion issues per se, she believes that her mission to address economic injustice and promote health care for all Americans helps reduce the number of abortions.

Williams also pointed to the invitation to Aaron Ledesma, a 23-year-old gay Catholic who said he recently returned to Mass because he was inspired by Francis’ message of inclusivity, and Episcopal Bishop Gene Robinson, the first openly gay bishop in the Anglican Communion, who’s now a senior fellow at the Center for American Progress, a think tank with ties to the Democratic Party.

READ:  Pope Francis tickets prompt debate: Is it better to scalp or to receive?

Williams is a vulnerable messenger for such a critique: He was a priest of a secretive and influential religious order, the Legionaries of Christ, a longtime favorite of the Catholic right, which the Vatican has been trying to overhaul after revelations of lurid sex and money scandals.

He later left the priesthood to marry a woman — the daughter of Mary Ann Glendon, a conservative Catholic law professor and ambassador to the Holy See under President Bush — with whom he’d secretly had a child while he was still a cleric.

The Breitbart story was given further momentum when The Wall Street Journal on Thursday (Sept. 17)  ran an article saying “the Vatican has taken offense” at the guest list. The story cited an unnamed “senior Vatican official” as the source of the offense.

That really got the ball rolling, and in a cascade of tweets and blog posts, conservative Catholics and their allies voiced outrage at the “childish dig at the pope” and the “juvenile” and “deliberate insult” to American Catholics.

“(T)he White House wants to deliberately embarrass the Pope by sticking a thumb in his eye, and by sticking their noses into Catholic doctrine and teachings,” Ed Morrissey wrote at HotAir.com.

Even the editorial page of The Washington Post got into the act on Saturday (Sept. 19), writing that the Vatican “has raised objections” (a Vatican spokesman in fact noted that the Holy See does not as a matter of course comment on such matters) and criticizing the Obama administration for being willing to offend a kindly soul like Pope Francis while kowtowing to oppressive governments such as China, Saudi Arabia and Cuba.

The president would never invite dissidents to receptions for those countries’ leaders, the Post said. (It did not mention that Francis is also being criticized for not meeting political dissidents and speaking out more forcefully on human rights while in Cuba.)

The Post also said inviting Campbell insulted Francis because she criticizes church policies on euthanasia; Campbell said in an email she has never raised the issue or criticized the Vatican over it.

“While I won’t have the opportunity to meet Pope Francis directly, I’ll be carrying in my heart many of the people that I’ve met on our Nuns on the Bus tours across this great country,” said Campbell, who is currently on a bus tour with other nuns to promote Francis’ teachings ahead of his visit.

On further review, maybe American conservatives and Obama critics are more upset than the pope they say they are defending.

While the guest list apparently irked the Vatican official who spoke to the Wall Street Journal, several other church officials in the Vatican and the U.S. said privately they didn’t consider the issue a problem or worth coverage.

They said there are far more important issues to think about in connection with the pope’s Sept. 22-27 trip to Washington, New York and Philadelphia, and they noted that the guests in question represented a handful of people out of many thousands.

Administration officials also said the White House worked with the U.S. Conference of Catholic Bishops, the Archdiocese of Washington, Catholic Relief Services and Catholic Charities to distribute invitations to guests from around the country.

Leading evangelicals and representatives of other faith groups were also invited, and many guests were told they could bring friends of their choosing.

(Jewish representatives will be absent because the event falls on Yom Kippur, the sacred Day of Atonement. That timing was the source of scattered complaints, though most Jewish leaders dismissed such grousing and said they understood scheduling was difficult. Francis is to formally meet with Jewish and interfaith leaders Friday in New York.) 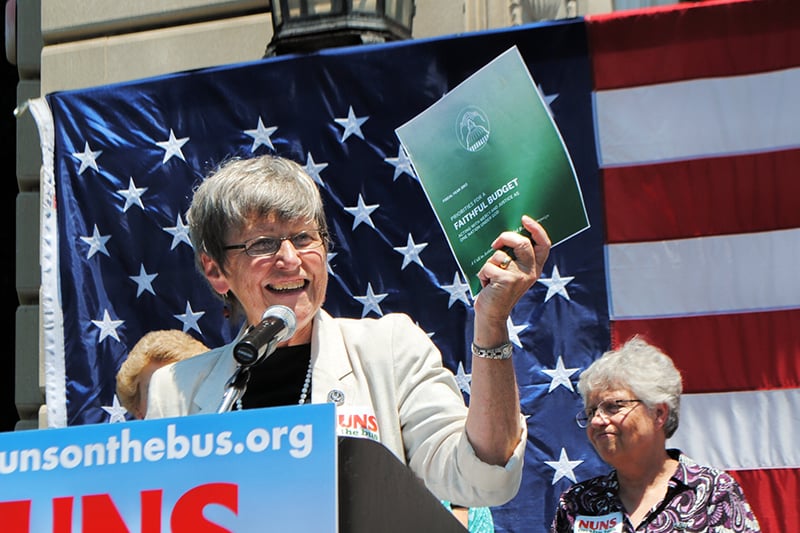 It seems unlikely that Francis would have a major problem with Campbell.

He has gone out of his way to praise the work of American nuns, whose social justice outreach seems to mirror his own priorities, and he ended a Vatican investigation of U.S. sisters launched under his predecessor, Pope Emeritus Benedict XVI.

The pope has also welcomed gay people to the Vatican and invited a transgender man from Spain to meet with him at his private residence. He has met with advocates for LGBT Catholics and appointed a German bishop to next month’s Vatican synod who has suggested that the church bless gay couples.

Just last week, a New York priest who ministers to gay and lesbian Catholics revealed that after celebrating Mass with Francis at the pontiff’s chapel in the Vatican, he gave the pope a DVD that tells stories about LGBT Catholics and their relationship to the church.

“This is from the gays and lesbians of the United States,” the Rev. Gil Martinez, pastor at the Church of St. Paul the Apostle, told Francis, according to Martinez’s interview with The Huffington Post.

In chatting in the pope’s native Spanish about his upcoming U.S. visit, Francis told Martinez: “I would love to visit and talk to gay and lesbian people. And please tell the gays to pray for me, and I shall pray for them.”

On Wednesday at the White House, the pope may be able to deliver that message in person — if he can find them in the crowd.

(Editor’s note: David Gibson assisted Sister Simone Campbell in writing her 2014 memoir, “A Nun on the Bus: How All of Us Can Create Hope, Change, and Community.”)