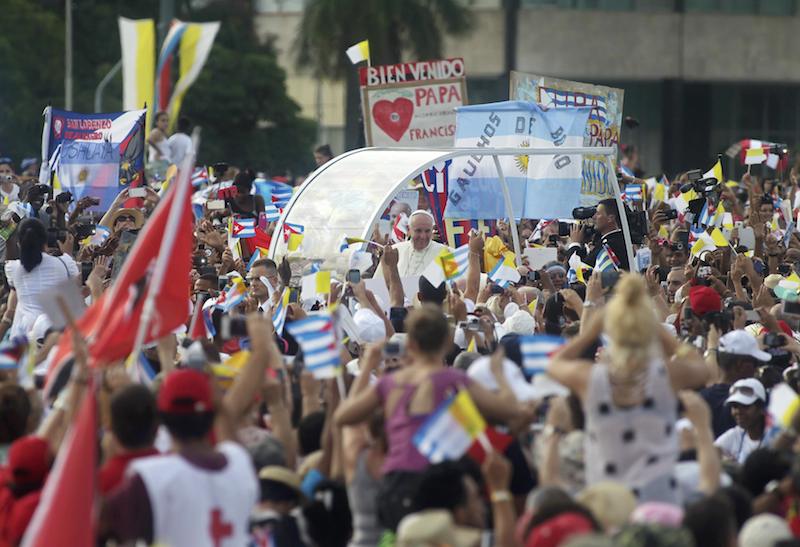 Pope Francis waves upon arriving to give the first mass of his visit to Cuba in Havana’s Revolution Square, September 20, 2015. Photo courtesy of Reuters

HAVANA (Reuters) – Pope Francis celebrated Mass in Havana’s Revolution Square on Sunday, offering both spiritual and political messages for the tens of thousands who packed the plaza, the symbolic heart of the Cuban revolution.

He warned of the dangers of power and ideology when others are excluded. At the same time, Cuban police kept some dissidents from attending and pounced on others apparently attempting to hand out flyers near the Mass.

The huge plaza is the site of government and Communist Party headquarters and where Cubans celebrate May Day beneath massive portraits of revolutionary leaders Ernesto “Che” Guevara and Camilo Cienfuegos built into the facades of state buildings.

To welcome the pope, who helped bring about the recent rapprochement between Cuba and the United States, a similarly giant poster of Jesus Christ was hung nearby.

Some pilgrims waited for hours in the tropical heat, eager to hear the first Latin American pope speak to them in Spanish, their common language.

“Francis has come to bless this new union between Cuba and the United States,” said Enrique Mesa, a 32-year-old tourism worker.

READ: Pope exhorts US and Cuba to push detente further

While Cuba’s government basks in the glow of the pope’s four-day visit, he may use the stage to criticize the Communist leaders on democracy and human rights.

“Service is never ideological, for we do not serve ideas, we serve people,” the pope said in his homily. “Do not neglect them (others) for plans which can be seductive, but are unconcerned about the face of the person beside you.”

Between 30-40 dissidents were detained to stop them attending papal events, a dissident human rights group said.

Security agents wrestled two men and a woman to the ground at the edge of Revolution Square, then led them off, after they started shouting and tried to hand out flyers, a Reuters witness said.

The pope’s homily carried messages that both committed Communists and the government’s most strident critics could claim as their own.

“All of us are called by virtue of our Christian vocation to that service which truly serves, and to help one another not to be tempted by a ‘service’ which is really ‘self-serving,'” the pope said.

READ: Conservatives outraged at gays on White House guest list for Pope Francis! (Vatican, not so much)

The government’s opponents may feel the pope was talking about Fidel and Raul Castro, the brothers who have been Cuba’s dominant figures since the 1959 revolution while their defenders could point to another passage as praise for a revolution that has provided Cubans with free health care and education.

“Who is the most important? Jesus is straightforward in his reply: ‘Whoever wishes to be the first among you must be the last of all, and the servant of all,'” Francis said.

Arriving on Saturday, Francis exhorted Cuba and the United States to deepen their detente, and encouraged Cuba to grant more freedom to the Roman Catholic Church, which has re-emerged as a powerful force after suffering decades of repression.

“His visit is cause for hope in our aspirations for improvement,” said biologist Benito Espinoza, 41, at Revolution Square. “We are an optimistic people, but we have suffered for many years.”

Francis waved and greeted Cubans as he arrived at the Mass, delighting one family when he picked up and kissed a four-year-old girl Karen Correoso.

“It’s a historic moment for her and for us. He blessed her,” said the girl’s aunt, Maria Teresa Gonzalez, 64, from a church in Matanzas city.

Many Cubans appreciate the pope for his role in the secret talks that led to last December’s breakthrough with Washington, when Cuban President Raul Castro and U.S. President Barack Obama vowed to normalize relations and end more than half a century of Cold War-era animosity.

Francis will fly from Cuba to Washington on Tuesday for meetings with Obama and addresses at the U.S. Congress and United Nations.

Cuba will welcome any papal condemnation of the U.S. economic embargo, which persists despite Obama’s policy change as only the U.S. Congress can lift it. The Republican leadership in Congress has defied Obama’s calls to do so.

But Castro’s government will also be sensitive to any criticism of its one-party political system or repression of dissidents.

Elizardo Sanchez, head of the Cuban Commission of Human Rights and National Reconciliation, said most of the 30-40 opposition activists rounded up were in Santa Clara and Havana.

Among them were three dissidents whose detention kept them from a meeting with the pope on Saturday night, said Berta Soler, leader of the dissident group Ladies in White.

Instead of seeing Francis at the Vatican’s diplomatic residence in Havana, Soler said she, Miriam Leyva and Martha Beatriz Roque were in police custody for several hours.

“The Holy Father is not going to change anything in Cuba,” Soler said. “We don’t expect much from Francis because he comes here to talk about political matters between Cuba and the United States, not to resolve anything.”