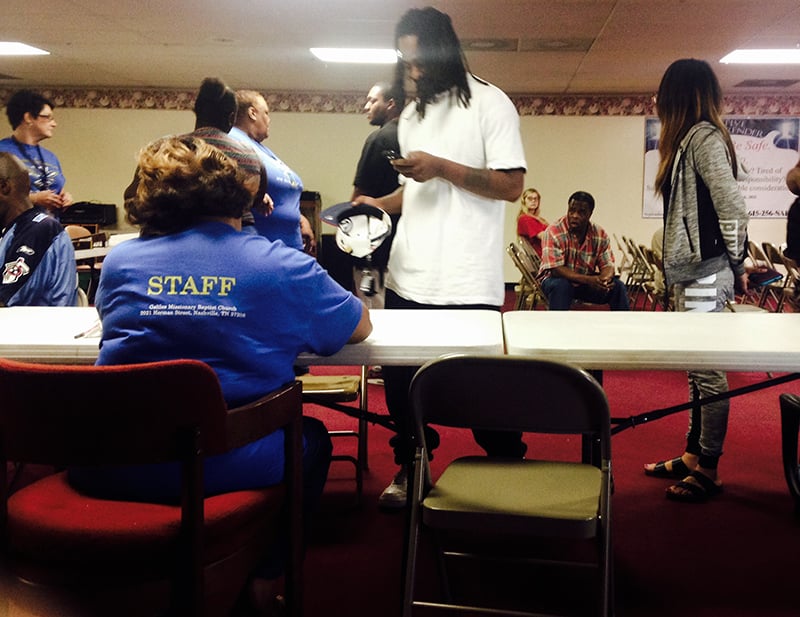 NASHVILLE, Tenn. (RNS) The first people that fugitives encountered when they surrendered themselves on a humid September weekend weren’t cops, judges, marshals or anyone else associated with the criminal justice system.

They were met by a phalanx of smiling, middle-aged church ladies, their vivid blue Galilee Missionary Baptist T-shirts unmistakable under the bright skies, smiling and holding open the door. Two other church volunteers collected belts and keys and sent the visitors through a metal detector.

And then they met Veda Gooch, a Galilee member standing on the other side, quick with a guiding touch on the arm or even a hug if they needed it.

Their relief was palpable as they finally faced outstanding warrants that, had they been stopped for so much as an expired license plate on the way there, would have landed them in jail.

Churches, involved with Fugitive Safe Surrender since it launched in 2005, increasingly head up efforts to offer the program since the federal government stopped funding it four years ago. They’ve overcome constitutional arguments about mixing church and state and thrown open the doors to perhaps the only institution where both police and wanted criminals would mix willingly.

It’s not sanctuary. It’s not amnesty. But from the start, founder U.S. Marshal Peter Elliott — who says he hasn’t missed a Catholic Mass in 21 years — knew involving the church would be vital to Fugitive Safe Surrender’s success.

“It’s the place I find the most peace and security,” Elliott said. “I thought people who are wanted would feel the same way. That minister is there for birth, marriage and death and is often the most trusted person in the community. Fugitives don’t trust people like me.” 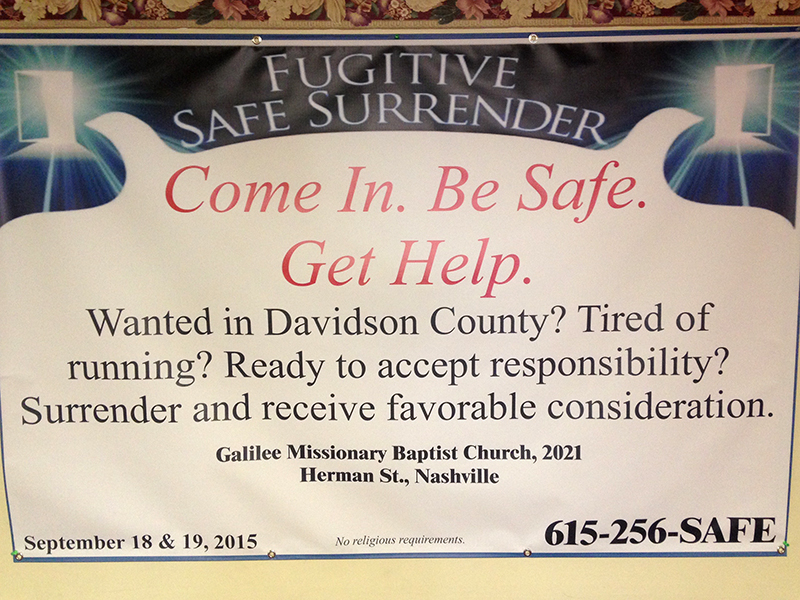 Elliott organized the program after a man wanted on a parole violation shot a Cleveland officer in the head during a traffic stop. Convinced he could prevent such crimes by clearing a path to the justice system, Elliott coordinated with the Rev. C. Jay Matthews of Mount Sinai Church in Cleveland plus local police, prosecutors and public defenders on a program that would make it simple for fugitives to stop running.

Prosecutors promise fugitives favorable consideration for turning themselves in. Over the course of an hour or so, those who do are arrested, fingerprinted, counseled, adjudicated and typically set free — unless they are accused of major or violent crimes.

Churches in more than 50 cities have hosted Fugitive Safe Surrender events over the past decade, some of them more than once, resulting in thousands of cleared warrants. The next one is scheduled to start Wednesday (Sept. 30) at Trinity Gospel Temple in Canton, Ohio.

Churches are integral to Fugitive Safe Surrender, surveys bear out. A 2012 study by Daniel Flannery, a professor in Case Western Reserve University’s applied social sciences school, found that three-quarters of fugitives who went through the program said it was important or very important that churches hosted it. (Fewer than 1 percent said they didn’t like surrendering at a church, and the program offers alternative sites for them.)

Flannery attributes that response in part to the historical idea of sanctuary, even if that’s not what Fugitive Safe Surrender offers.

The sanctuary concept began with Old Testament “cities of refuge,” where criminals could hide to avoid the death penalty. The medieval Christian church used it to demonstrate ultimate authority. In the 1980s, hundreds of American churches banded together to offer refugees sanctuary from violence in Central America — despite having no legal standing to do so. Just last year, Daniel Neyoy Ruiz, a Mexican immigrant, spent weeks living in a Tucson, Ariz., church to avoid deportation.

“Their lawyers sent a letter about not putting courtrooms in religious rooms, not proselytizing to people, not requiring they receive religious information,” he said. “We also covered up any religious artifacts that were visible.”

At the recent Nashville event, fugitives were plied not with religion but with a seemingly endless supply of Krispy Kreme doughnuts that kept appearing on a table in the fellowship hall.

Joshua Paris stared serenely forward, waiting to address a minor drug charge stemming from a concert he’d attended with a buddy. He’s got a daughter on the way, he said, and he’d like a chance at supporting her by clearing up his record and joining the military.

“I believe in God, although I don’t go to church every Sunday,” Paris said. “I came here because I knew I could walk in and not see steel bars everywhere.”

A judge, set up behind a desk in a Sunday school classroom, sentenced him to community service and committed to expunging his record if he complied. Paris was free to go.

Nashville last hosted a Fugitive Safe Surrender in 2007, when the U.S. Marshals Service was still paying for it with federal grants. That funding ended after a review showed the program didn’t align with a goal of capturing violent offenders.

This time, participating churches, the Metro Nashville Police Department and other agencies either provided or sought donations for everything, including radio and TV ads, event signage and lunches for volunteers.

It helps that Nashville police’s relationship with the city’s black community — where both Fugitive Safe Surrender events were held — is an unusually peaceful one, said the Rev. Michael Joyner, pastor of Greater Faith Missionary Baptist Church, one of the coordinators.

“They’ve seen the police department stop traffic so our people could lie on the interstate,” Joyner said, referring to a November 2014 protest of the Michael Brown shooting in Ferguson, Mo.

He said church leaders went to police asking to work together on another Fugitive Safe Surrender because the 2007 one had a yearslong effect of people asking for help turning themselves in.

And even if they’re not talking about Jesus, pastors can show the community loving concern through the event. “We want our video to match our audio,” Joyner said.

In the end, 86 Nashville-area fugitives surrendered and cleared up 130 warrants over a Friday and Saturday.

Gooch, the Galilee greeter, said she was motivated to volunteer for the event after a moving sermon by the Rev. William Harris about young people getting their lives on track.

Yes, she was nervous about spending a day with people accused of crimes. But Gooch said she ended up fielding a prayer request from a young woman facing jail time and worried about what that would mean for her 2-month-old baby and a mother fighting cancer.

It’s much better for people to turn themselves in at Galilee than the police station, Gooch believes.