Justin Bieber’s interest in Christianity has been well-documented in recent years. He’s reportedly been baptized, attended a Christian conference in Australia, and quoted Psalm 43 in an Instagram post a few months ago (in the picture, Bieber was reading Occupy All Streets, a book by Hillsong pastor Carl Lentz):

Vindicate me, my god, and plead my cause against an unfaithful nation. Rescue me from those who are deceitful and wicked. – Psalms 43 I'm not religious nor do i think I have ANYTHING figured out that's why I call out on God to help me through what I can't do on my own. Developing my relationship with God has been the coolest thing I've experienced, to know that I'm not alone and I don't have to live in fear. Never feel like I'm pushing anything on u but sharing the good news I've felt in my own life.

It would be easy, on the one hand, to hold Bieber up and point to his failures or certain character traits and say, really? He’s a Christian? But if I did that, to be fair, I’d want to hold myself up to the same standards, at which point we might also say, really? She’s a Christian? If Christianity produced people who all looked exactly alike, it would be boring and a bit ineffective. So I read with interest what Bieber said about his faith in a recent interview with Complex Magazine.

“My faith has brought me to a whole other level. I love talking about my faith. I think that with Christians, they’ve left such a bad taste in people’s mouths. Just like, overly pushy with the subject, overly churchy and religious.”

“I just wanna honestly live like Jesus. Not be Jesus—I could never—I don’t want that to come across weird. He created a pretty awesome template of how to love people and how to be gracious and kind. If you believe it, he died for our sins.”

I was especially interested when he started talking about the cultural expectations we have for Christians and what it means to go to church:

“Christians leave such a bad taste in people’s mouths, even myself. I was like, I’m not gonna go to church…It doesn’t make you a Christian just by going to church. I think that going to church is fellowship, it’s relationship, it’s what we’re here on the earth to do, to have this connection that you feel there’s no insecurities. I think that’s where we need to be. Like I said, you don’t need to go to church to be a Christian. If you go to Taco Bell, that doesn’t make you a taco.” 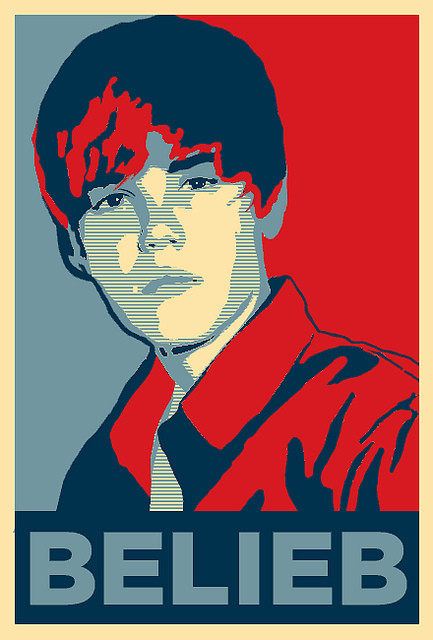 Going to Taco Bell does not make you a taco! And going to church, it’s true, doesn’t make you a Christian. Bieberian theology is right in line with the “spiritual but not religious” phenomenon that affects many younger people today. Where organized religion has made God look formal or hateful or distant, Christians are right to reject it. People are right to reject it. But I also wonder about verses like Hebrews 10:25, where the writer urges Christians not to neglect meeting with each other, as some Christians are in the habit of doing, but to encourage one another. Perhaps Bieber and others take this to mean developing relationships with other Christians for encouragement rather than going to church, and I can understand that.

On the other hand, one of the best things about church, from a Christian point of view, is that you can’t be there long without encountering people who are profoundly different than you are. It doesn’t take too long on a Sunday morning–or, it shouldn’t–before I meet other Christians whose backgrounds look nothing like mine, and that diversity is part and parcel of the gospel. Everyone is welcome, not just the people I would normally become friends with or the people I think are cool.

Bieber’s point about the church is important, and it shows us how far we have to go. But I also hope that anyone who calls themselves a Christian will, at some point, see the vitality and beauty of a church congregation, and see what’s missing when they’re not around it.