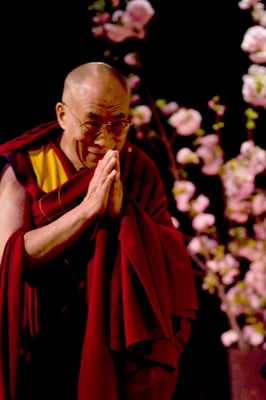 (RNS1-JUL12) The Dalai Lama has won the Nobel Peace Prize, but not all of his 13 predecessors might have qualified. For use with RNS-DALAI-LAMAS, transmitted July 12, 2011. RNS photo courtesy of Rogers & Cowen

Tibet's exiled Buddhist spiritual leader, the Dalai Lama, has left the Mayo Clinic in Rochester, Minn., after what his office called a routine annual check-up, hospital officials said on Wednesday.

The 80-year-old Nobel Peace Laureate canceled planned visits in the United States in October at the advice of doctors who urged him to rest for several weeks, his office said in a statement on Friday. His office gave no indication that he was ill nor any details about his state of health.

Mayo spokeswoman Ginger Plumbo said on Wednesday that he had been released, but declined to provide any information as to when he left or further details on his stay.

The Dalai Lama's office could not immediately be reached for comment on Wednesday.

READ: At 80, the Dalai Lama is just getting started

His time in the country coincided with the visit of Pope Francis, who met with President Barack Obama and left to return to Rome on Sunday night after a 10-day trip to the United States and Cuba.

"It means the world to us," Dorjee Damdul told the newspaper. "We follow his guidance ... he touched our faces. It was a blessing."

READ: It’s up to Dalai Lama whether he’ll be reborn, Buddhist leader says

China has ruled Tibet with an iron fist since Communist troops took over the region in 1950. Beijing regards the Dalai Lama, who fled into exile in India in 1959, as a dangerous separatist who wants an independent Tibet.

The Dalai Lama has repeatedly refuted those claims and has advocated for seeking greater autonomy for Tibet within China through dialogue with Beijing.

September 3, 2020
Related Posts
By Claire Giangravé
Global missionary efforts have taken a hit in the time of coronavirus
By Claire Giangravé
Vatican’s China deal may protect Chinese Catholics, keep Pope Francis silent
By Brooke Schedneck
Buddhist monks have reversed roles in Thailand – now they are the ones donating goods to others
By Kalpana Jain
My spiritual path through the COVID-19 darkness
By Mark Silk
Trump’s limp response to Uighur persecution