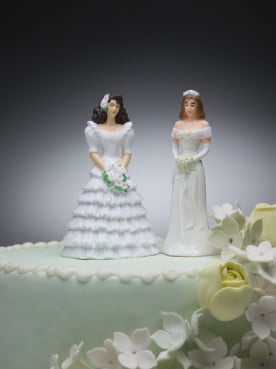 Owners of a Portland, Ore., bakery that refused to sell a wedding cake to a lesbian couple are now fighting court-ordered damages. Photo via Shutterstock

PORTLAND, Ore.(Reuters) – The owners of a Portland-area bakery who refused on religious grounds to bake a wedding cake for a lesbian couple are fighting a court order to pay the pair $135,000 in damages, Oregon officials said on Wednesday.

When Laurel and Rachel Bowman-Cryer were planning their nuptials in 2013, Aaron and Melissa Klein, the owners of the Sweet Cakes by Melissa bakery, refused to bake the cake, citing their religious beliefs.

The Kleins were featured guests at the conservative Value Voters Summit in Washington, D.C., last week alongside Kim Davis, a Kentucky clerk who was jailed after her refusal to issue the licenses and who met with Pope Francis during his U.S. visit.

Oregon’s Bureau of Labor and Industries found the owners had violated anti-discrimination laws because their shop is not a registered religious institution, and ordered them to pay the couple $135,000 in damages.

The Kleins appealed the ruling and have refused to pay, citing financial hardships, Bureau spokesman Charlie Burr said, adding that the agency is exploring options for collecting the money.

The agency has given the Kleins the option of obtaining a bond or a line of credit, and has also agreed to hold funds in escrow until the appeals are settled, Burr said.

Burr also said they have raised nearly $500,000 through a donation campaign.

“They are entitled to a full and fair review of the case, but do not have the right to disregard a legally binding order,” Burr said.

An attorney representing the Kleins, Herb Grey, said the couple has raised far less than $500,000, but declined to give an exact number. He also said they should not be obligated to pay the damages because the case is not settled.

READ: I’m no fan of gay marriage, but bake the cake and arrange the flowers (COMMENTARY)

“They continue to stand on their well-established constitutional rights to live and work based on their values and beliefs,” Grey said. “Religion is a protected class just like sexual orientation is.”

Grey said he expects the appeal to be heard in the spring.

The gay couple married in 2014 after a federal judge struck down the state’s same-sex marriage ban.

The bakery case is one of many disputes nation-wide since the U.S. Supreme Court’s decision in June to legalize same-sex marriage in all 50 states.