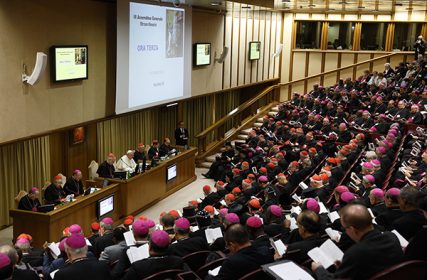 Pope Francis and prelates attend the Synod of Bishops on the family at the Vatican on Oct. 9, 2014. Photo by Paul Haring, courtesy of Catholic News Service

VATICAN CITY (RNS) A global meeting of Catholic bishops on the family, known as a synod, is due to start on Sunday (Oct. 4), with interests groups already jockeying to have their voices heard.

The status of gay Catholics is among the most fiercely debated.

Pope Francis has been hailed by some gay rights groups as creating a more welcoming church, particularly with his “Who am I to judge?” comment back in 2013.

But for many gay Catholics, the first synod on the family held last year ended in disappointment. A working document released midway through the three-week conference suggested that the church adopt a more open approach, but the final report toned that language down. Francis insisted the issue be included for future debate, however, and many bishops at the synod are on record calling for more openness to gays and lesbians.

A lot has happened in the LGBT debate globally in the past year. Ireland, a predominantly Catholic country, legalized gay marriage by popular vote in May. In June, the U.S. Supreme Court ruled gay marriage legal. Meanwhile in Italy, gay couples continue to have no legal rights.

France made a bid to have an openly gay ambassador installed at the Holy See but the Vatican’s silence on the appointment may be interpreted as a rare rejection of a new diplomat.

The ground was further shaken this week, when it was revealed Francis met Kim Davis, a U.S. county clerk who was jailed for refusing to sign marriage licenses for same-sex couples. Then on Friday, reports surfaced that the pope had also met with a gay man and his partner. The man was former student of the pope’s in Argentina.

In this confusing climate, bishops are expected to come up with clear guidelines on how priests should respond to gay Catholics, as well as other family issues such as divorce.

One of the groups hoping to see its view on the matter triumph at the synod is the Filial Appeal. Made up of lay Catholic leaders and other organizations, it has spent 2015 campaigning against allowing gay people who are not celibate to be part of the church; the group also wants to stop divorced people from receiving Communion.

READ: Why is Pope Francis asking people to pray for him?

The Filial Appeal said on Tuesday (Sept. 29) it had gathered 790,190 signatures for a petition supporting its views, although organizers said it would not be immediately possible to view the list of names.

Tommaso Scandroglio, an Italian academic who presented the appeal in Rome, said he believes Catholic doctrine should be followed to the letter, with no opening up to gay relationships within the church.

“The condition of homosexuality is an objective disorder, meaning it’s an orientation that contrasts with people’s normal orientation,” he said. “The Catholic Church recalls that it must be a (place of) welcome, not of sin; we must not welcome homosexuality.”

The Filial Appeal is one of a number of traditionalist groups holding meetings in Rome this week to voice their views. But for every such conference, another has been organized by the opposite camp.

Andrea Rubera, president of the gay Christians’ association Nuova Proposta (New Proposal), part of the Rainbow Catholics network, said on Wednesday that it’s time the Vatican woke up to reality.

“If we keep having a dialogue based only on an ideological basis, we will never get anywhere,” he said. “We have to meet and create a dialogue on a human basis. … We have to meet real people, real lives, real histories.”

Rubera said he wanted the synod to produce a pastoral paper, which detailed how different types of families, including gay and divorced ones, could be welcomed into the church.

As a gay father of three, he spoke specifically about the absence of guidance on how to respond to the children of gay couples: “The synod could give them (churchmen) tools to accept their kids as they are, without any distorted information about ‘treating’ their kids in order not to be gay or lesbian.”

READ: The ‘Splainer: Kim Davis, Pope Francis and the fight over conscientious objection

With the right approach from bishops, Rubera said, gay families could make a huge contribution to Catholic communities. But he knows that is unlikely.

“If I have to be pragmatic, I think that nothing of what I mentioned will come out from this synod,” he said. “I hope that the synod will be a step forward regarding what they finally produced last year, which was more or less nothing.”