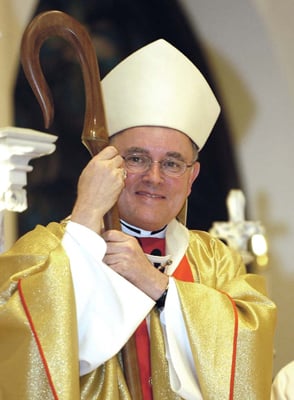 A series of recent developments are renewing questions about the Catholic bishops’ alignment with the Republican Party, with much of the attention focusing on comments by Philadelphia Archbishop Charles Chaput, who said he certainly cant vote for somebody whos either pro-choice or pro-abortion. Photo courtesy the Archdiocese of Philadelphia

(RNS) Philadelphia Archbishop Charles Chaput is one of eight American prelates — out of 270 bishops from around the world — at this month’s high-stakes Vatican summit on family issues, known as a synod.

He is also often associated with the “culture warrior” wing of the U.S. hierarchy, and seen as someone who may not see eye to eye with Francis on the church’s approach to the world.

Here is the text today (Oct. 7) of Chaput’s speech to the pontiff and the synod so readers can judge his take for themselves, and where it stands in the context of what Francis and other bishops have said:

“The Instrumentum (the synod’s working document that is the basis of discussions) seemed to present us with two conflicting views: pastoral despair or a decision to hope. When Jesus experienced the pastoral despair of his Apostles, he reminded them that for man a thing may seem impossible, but for God all things are possible.

“In mastering nature for the purpose of human development, we human beings have wounded our oceans and the air we breathe. We’ve poisoned the human body with contraceptives. And we’ve scrambled the understanding of our own sexuality. In the name of individual fulfillment, we’ve busied ourselves with creating a new Babel of tyranny that feeds our desires but starves the soul.

“Paragraphs 7-10 of the Instrumentum did a good job of describing the condition of today’s families. But overall, the text engenders a subtle hopelessness. This leads to a spirit of compromise with certain sinful patterns of life and the reduction of Christian truths about marriage and sexuality to a set of beautiful ideals — which then leads to surrendering the redemptive mission of the Church. The work of this synod needs to show much more confidence in the Word of God, the transformative power of grace, and the ability of people to actually live what the Church believes. And it should honor the heroism of abandoned spouses who remain faithful to their vows and the teaching of the Church.

“George Bernanos said that the virtue of hope is “despair, overcome.” We have no reason to despair. We have every reason to hope. Pope Francis saw this himself in Philadelphia. Nearly 900,000 people crowded the streets for the papal Mass that closed the World Meeting of Families.

“They were there because they love the Pope, but also because they believe in marriage. They believe in the family. And they were hungry to be fed by real food from the Vicar of Jesus Christ. We need to call people to perseverance in grace and to trust in the greatness God intended for them — not confirm them in their errors. Marriage embodies Christian hope – hope made flesh and sealed permanently in the love of a man and a woman.

“This synod needs to preach that truth more clearly with the radical passion of the Cross and Resurrection.”