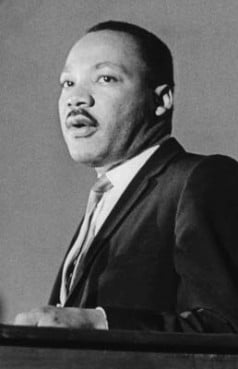 Park officials told the Atlanta Journal-Constitution that the monument to King would feature a replica of the Liberty Bell with the inscription "Let freedom ring from Stone Mountain of Georgia," a line from his 1963 "I Have a Dream" speech. King was assassinated in 1968 in Memphis, Tennessee.

The Liberty Bell, housed at Philadelphia's Independence Hall, is a symbol of American freedom.

Formal plans, which include a memorial to black Confederate soldiers, were expected to be announced soon, the newspaper reported. Neither officials with Stone Mountain Park nor the governor's office could immediately be reached for comment.

The park, with family attractions, hiking trails and historical exhibits, is on a site that is considered the birthplace of the modern Ku Klux Klan white supremacist group, which was revived during the 1960's civil rights movement.

But Stone Mountain is best known for the "Confederate Mount Rushmore," a 90-ft relief sculpture of Confederate President Jefferson Davis, General Robert E. Lee and General Thomas "Stonewall" Jackson. The trio were leading figures of the rebel Southern states that fought in the Civil War of 1861-65.

Many Southerners have long embraced images of the Confederacy, including statues, memorials and the Confederate battle flag, as emblems of regional pride and as a tribute to its Civil War veterans. Critics say they invoke the South's legacy of slavery and resistance to the civil rights campaign.

Ray McBerry, spokesman for the Georgia division of The Sons of Confederate Veterans, said that his group strongly objects to the plan. He said that placing monuments to anyone other than Confederate heroes on Stone Mountain is contrary to the park's purpose of celebrating Southern heritage.

"It's akin to the state flying a Confederate battle flag atop the King Center in Atlanta against the wishes of King supporters," McBerry said.

Confederate imagery has come under intense criticism since the June 17 shooting deaths of nine black parishioners at a historic black church in Charleston, S.C. A website apparently published by the young white man charged with the murders gave details of his racist beliefs and had pictures of him brandishing the Confederate battle flag.

In the fallout from the shooting, the flag was removed from the plaza in front of the S.C. State House.

The Charleston killing also led to calls for removing the rebel flag from Stone Mountain and there was a boycott of the park on the July 4th Independence Day holiday.

Related Posts
By Yonat Shimron
For storied civil rights center, Highlander Center fire is an echo of the past
By The Associated Press
Crowds mark 50 years since MLK funeral
By Adelle M. Banks
In Washington, clergy demonstrate against white supremacy
By Adelle M. Banks
Black Southern Baptists: 'We are pulling for Dr. Moore'
By Adelle M. Banks
‘We Shall Not Be Moved’ marchers honor King, fight fear of Trump