DEARBORN, Mich. — About a dozen people, some armed with rifles, showed up for an anti-Islam rally over the weekend, outnumbered by two groups of counterprotesters.

Waving American flags and holding up signs that read “Stop the Islamization of America” and “ISIS Is Evil,” the protesters gathered outside Henry Ford Centennial Library and said they were demonstrating against radical Islam. It was one of about 20 weekend rallies planned near mosques across the U.S. The organizers wanted to protest against the Nation of Islam’s “Justice or Else” event, held in Washington, D.C., and against what they said is the threat of the Muslim faith.

Marcia Bodary of Mt. Clemens held up a sign that read: “No More Refugees,” expressing concern about Syrian refugees coming to America.

“We’re taking in too many refugees,” she said. “We don’t know who they are. It’s impossible to vet them … Don’t overwhelm us. We can’t afford it.”

The anti-Islam protesters, who support open-carry rights, were met with two groups who opposed their message: members with a communist group and supporters of open-carry who said they wanted to express solidarity with Muslims.

Several protesters and counter-protesters brandished AK47 or AR15 rifles. City officials had said were worried about the event, but it went smoothly with no arrests, Dearborn Police Chief Ron Haddad and Dearborn Mayor Jack O’Reilly Jr. said after the rally.

“That’s democracy, that’s America,” O’Reilly said of the protests. O’Reilly said he hopes the protesters realized that Dearborn, where many residents are Muslim, is not a radical place. The city has dealt with several anti-Islam protests over the past five years.

“They came here and saw: there’s no threat to them,” he said. “There’s nothing to be afraid of.”

O’Reilly and community leaders had been urging people not to show up to confront the protesters. Their message was heard, with only about 30 counterprotesters showing up.

Area Muslims and Arab-Americans participated in other already planned events to help communities, including feeding and clothing needy people at the Muslim Center in Detroit.

Most of the anti-Islam protesters declined to give their names. The administrator of the Facebook page who organized the Dearborn event also has not given his name.

Jon Ritzheimer, an Arizona man with the anti-government group Oath Keepers who had threatened to arrest U.S. Sen. Debbie Stabenow in Michigan over her support of the Iran deal, was one of the leaders who instigated the nationwide protests, said the Southern Poverty Law Center.

The communist group that counter-protested in Dearborn held up signs that read “No to Anti-Islam Bigots” and “Unity Yes! Racism No!” while chanting “Stop Terrorizing Muslims at Home and America” and “Hey hey, ho ho, racist fascists got to go.”

The open-carry group that supported Muslims said it wanted to send a message that open-carry proponents are not bigots. One couple from Cadillac who support gun rights but opposed the anti-Islam message had guns painted red, white and blue along with patriotic shirts colored like an American flag.

“I’m here today to protest the Islamophobic protesters that are here bearing arms,” said Rekab Semaj of Oakland County, who had an AK47 rifle slung over his shoulder and a sign reading “Muslims Deserve Freedom.”

A handful of Muslims debated with the anti-Islam protesters about religion and extremism. The protesters were inside a fenced area set up by Dearborn Police, who kept a close eye on the rallies.

Dearborn Police Chief Haddad said of the protest: “I’m very proud of our community. Our mayor asked them to stay home, and they stayed home,” largely ignoring the anti-Islam demonstrators.

“Democracy worked the way it was supposed to,” Haddad said. “Both sides did the right thing. They were civil. … That’s what this country is all about.” 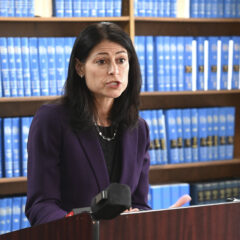