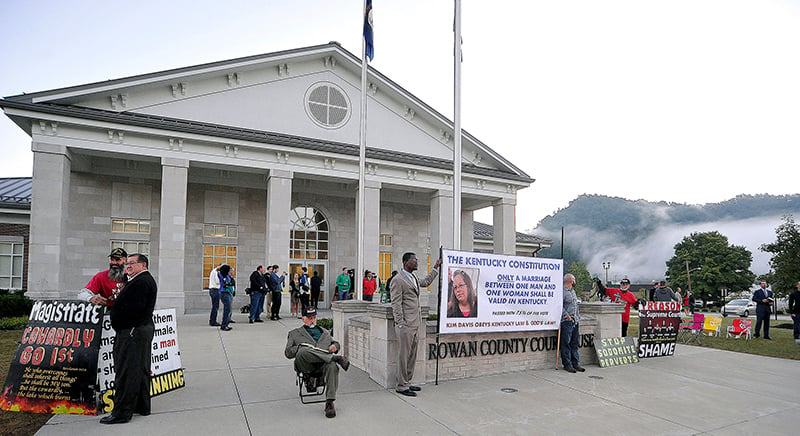 Demonstrators show their support for Kim Davis outside the Rowan County Clerk’s Office in Morehead, Ky., on Sept. 14, 2015. Photo courtesy of REUTERS/Chris Tilley
*Editors: This photo may only be republished with RNS-PASTORS-CLERK, originally transmitted on Oct. 14, 2015.

FRANKFORT, Ky. — A small group of pastors who support Rowan County Clerk Kim Davis left disappointed from the state Capitol on Tuesday (Oct. 13) after seeking a meeting with the governor.

The group had attempted to meet with Gov. Steve Beshear but spoke instead with the governor’s chief of staff, Larry Bond, for more than an hour.

They are urging Beshear to call a special session so lawmakers can enact accommodations for religious county clerks who refuse to provide marriage licenses for same-sex couples.

The Rev. Randy Smith, a spokesman for the group, said pastors were not pleased with the response.

Beshear has repeatedly said he would not spend taxpayer money to call the legislature into special session when the issue could be addressed in next year’s General Assembly.

Beshear spokesman Terry Sebastian said the governor was in another meeting and could not attend Tuesday. He said Bond told the group that the governor has no legal authority to relieve county clerks of their statutory duties through an executive order.

“The General Assembly will convene in just 12 weeks and can make any statutory changes it deems necessary at that time,” Sebastian said.

Smith said the group’s concerns extend beyond county clerks and include fears that churches could one day be forced to perform same-sex weddings. He argued that a majority of taxpayers supported Kentucky’s ban on same-sex marriage in 2004 and would likely support a special session deal with the issue.

“Accommodations have been something that this nation has afforded many, many people down through the existence of our nation,” he said. “We want to right an injustice.”

Tuesday’s group included five pastors and one deacon from churches in Eastern Kentucky. Smith said 10 to 12 pastors also are forming an alliance to help shape legislation in Kentucky going forward.

In the meantime, a new poll shows that 47 percent of Kentucky voters believe that county clerks should not get special exemptions while 42 percent say they should. Another 11 percent were not sure.

The poll was conducted Oct. 6-8 by Mason-Dixon Polling & Research. It surveyed 625 registered voters with a margin of error of plus or minus 4 percentage points.

Researchers found that voters in rural areas of the state were more likely to support an exemption compared with those in urban areas.

(Mike Wynn writes for The Courier-Journal of Louisville, Ky.)

News
Presbyterian Church in America leaders say those who identify as gay are not qualified for ordination
Follow us on Facebook!
Submit your photos to RNS