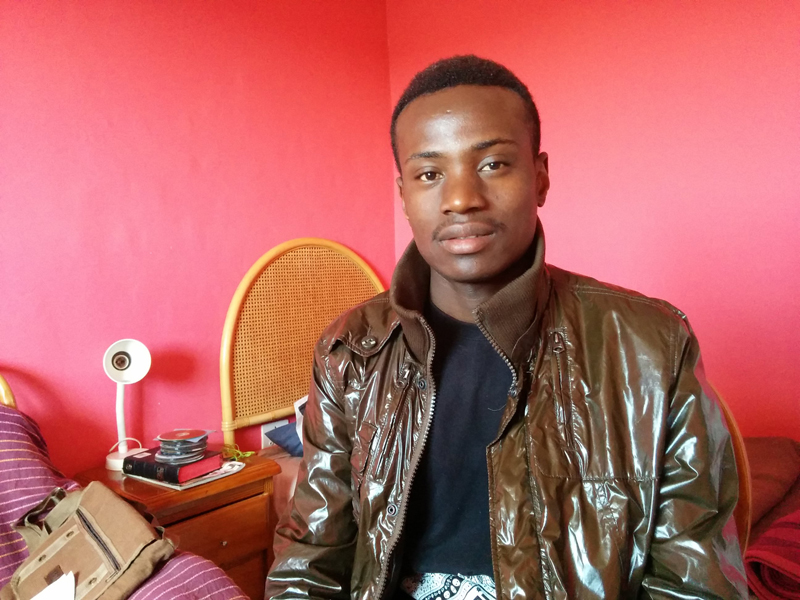 Across the train tracks at their shared home in Manenberg, Hlubi George said she can finally sleep through the night.

January, who is gay, and George, who is lesbian, are both temporary residents at Inclusive and Affirming Ministries’ iThemba Lam LGBTI safe house on the outskirts of Cape Town. The two-bedroom center provides refuge and counseling for at-risk sexual minorities from across the continent and a safe space for residents to integrate “God’s gift of faith with God’s gift of sexuality.”

iThemba Lam means “my hope” in the local Xhosa language. For January, George and the dozens of residents who have come before them, the center lives up to its name.

“It was not even a house; it was a shack, a two-room bungalow,” she said of where she once hosted up to eight guests at a time. “I didn’t mind, because some of the experiences that others went through I never went through, like being beaten or raped or being kicked out of their homes because of their sexuality.”

iThemba Lam has never been the target of hate crimes, Panda said. But such incidents remain all too common in sub-Saharan Africa. Persecuted LGBTI people of all ages and faiths are welcome at iThemba Lam for up to three months, and refuge seekers have come from Malawi, Congo, Zambia, Zimbabwe and across South Africa. 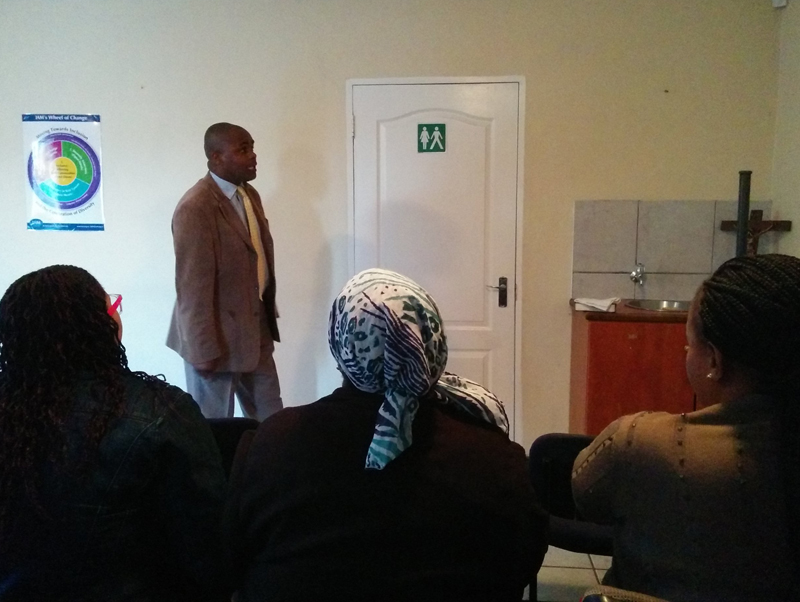 January said his journey to the center began last year after a gang of men beat him “nearly to death” for kissing another man in neighboring Zimbabwe, where he is from.

“I decided to come here so I would be free. No one is going to threaten me because I’m gay. I am safe here,” he said of his adopted home at the continent’s southern tip.

South Africa was the first country in the world to prohibit discrimination on the basis of gender and sexual orientation in its constitution and remains the only African country where gay marriage is legal. Yet such laws bring little comfort to most sexual minorities in the country’s predominantly black and Christian townships.

Just two miles north of iThemba Lam, George said, she was raped by a neighbor who disapproved of her wearing “unladylike” pants and walking with her girlfriend in public. Hundreds of reports of such “corrective rapes” — a controversial but commonly used term in South Africa — are registered each year in the Western Cape alone. After George pressed charges against the man, she said, he broke into her home with a gun and fired shots. That’s when she found shelter at iThemba Lam.

“I feel safe here,” George said from her temporary bed, one of four at the center. “At home I wasn’t sleeping well. I was depending on pills I was given by my counselor. Now I can sleep at night.” 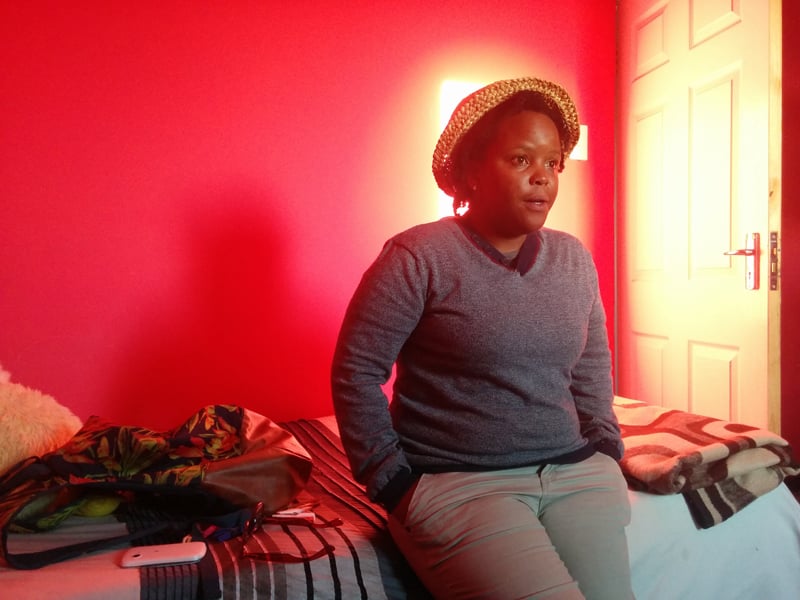 iThemba Lam is more than just a temporary home for at-risk LGBTI people like George and January. In a meeting room below the center’s two bedrooms, Inclusive and Affirming Ministries hosts regular workshops. In that same room, an unaffiliated Pentecostal group called Grace Community Church leads neighbors in prayer several nights a week.

Although the safe house has no faith requirements for its residents or staff, January regularly attends the services, and Panda drops in on occasion.

The Rev. Zongamele Baliso brought Grace Community Church to iThemba Lam last year after hearing about the center’s community work feeding neighbors and clothing children. He encourages LGBTI residents to worship with him and said he reserves judgment, up to a point.

Asked if he would consider officiating at gay marriage services, which Inclusive and Affirming Ministries will perform, Baliso laughed while delivering a drawn-out “Noooo.”

“As a man who believes in the Word, I must honestly say that I wouldn’t officiate such marriages because it would be contrary to my stance, to my belief,” he said. “My belief is something different, though I know I’m not judging anyone.”

That sort of rhetoric is on the tamer side of what Inclusive and Affirming Ministries strives to address in its outreach to clergy and congregations. 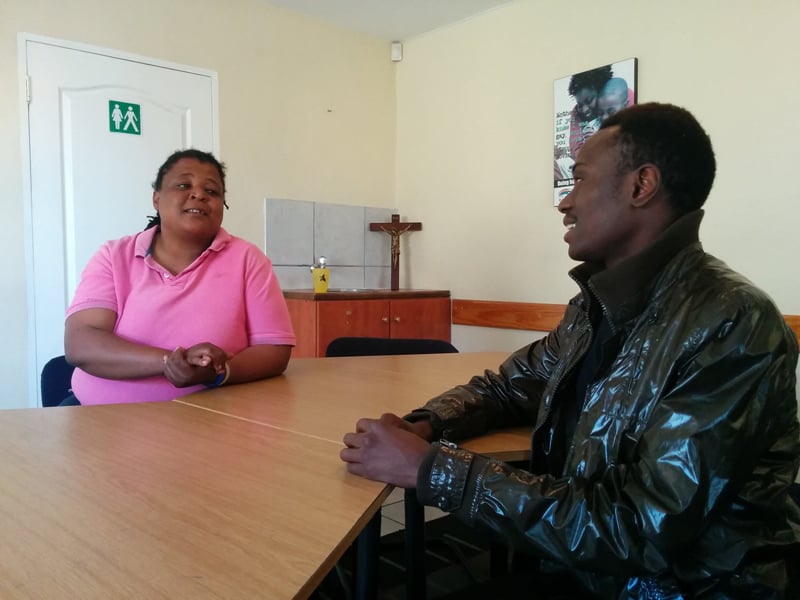 “People believe in the Bible so much here. If you want to change minds, you have to go to the church,” Panda said.

That’s where her clergy colleagues come in. Michelle Boonzaaier is a self-proclaimed “hetero ally” and Dutch Reformed Church minister who conducts clergy outreach for the group.

“Inclusivity cannot just be window dressing,” Boonzaaier said. “Radical inclusivity means that you have to really transform. Within the church, it’s often difficult to transform, because dogma is so entrenched, so it means we need to uproot our dogma, analyze it, and then include people.”

Boonzaaier’s work involves identifying potential “change agents” within congregations, setting up trainings around sexual orientation and gender identity expression, and using those opportunities to open dialogue about LGBTI inclusion. It also involves deconstructing biblical texts and reading them in a new light, sometimes with struggling friends and family members of LGBTI people who have recently come out. 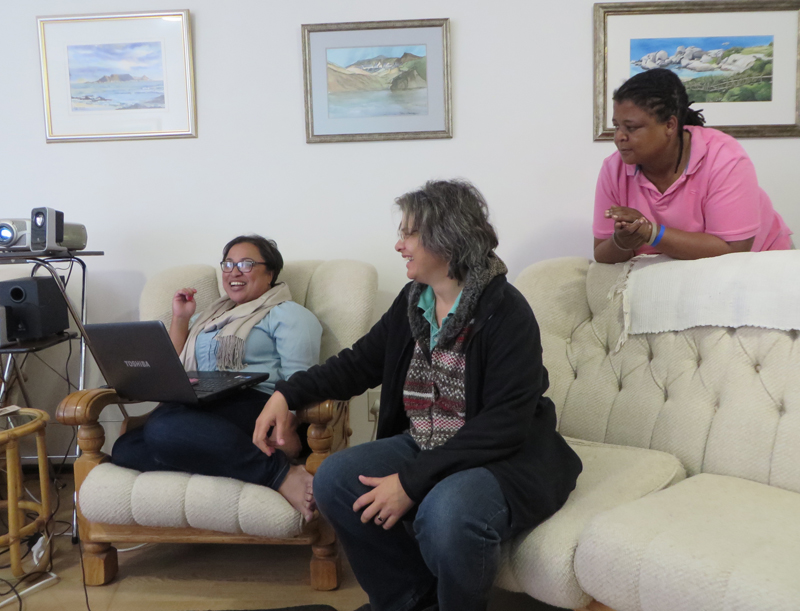 “It’s amazing how people read the text and go, ‘Oh my word, this was never about gay people, this was about something different.’ It opens up a whole different way of engaging with the Bible,” she said.

Panda, who is also a former Sunday school teacher, said she has personally benefited from such “aha moments” with Inclusive and Affirming Ministries. She left her Presbyterian church years ago after weathering criticism for wearing pants instead of traditional dresses and skirts to services and hearing one too many rumors that she intended to “teach the children to be gay.”

“Nowadays, if I want to go to church, I wear my pants. I have more self-confidence than before,” she said. “Through my journey I’ve found out that God loves me the way that I am and that being LGBTI isn’t a curse but a gift from God.”

Panda attended one of Baliso’s services earlier this month in jeans and a pink polo shirt, singing along to Xhosa and English hymns with a dozen neighbors who praise her work in the community.

Resting his gaze on January in the back row, Baliso said of an opening Xhosa hymn: “It explains the immeasurable, unconditional love of God. He didn’t discriminate. He died for all of us.”