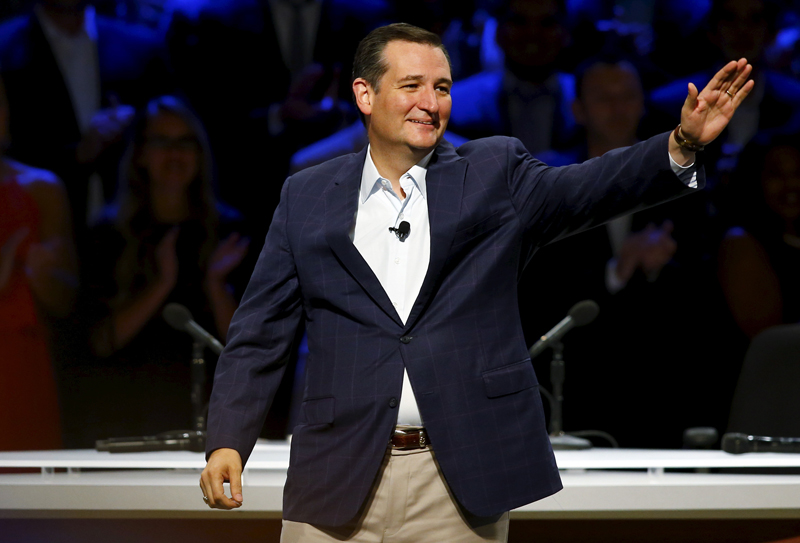 U.S. Republican presidential candidate Senator Ted Cruz is introduced at the North Texas Presidential Forum hosted by the Faith & Freedom Coalition and Prestonwood Baptist Church in Plano, Texas on October 18, 2015. Photo courtesy of REUTERS/Mike Stone
*Editors: This photo may only be republished with RNS-FAITH-POLITICS, originally transmitted on Oct. 19, 2015.

PLANO, Texas — A half-dozen Republican presidential candidates hit all the hot buttons Sunday (Oct. 18) while speaking to an influential audience: Religious conservatives, the kinds of voters who could decide many GOP primaries next year.

“It’s time for us to bring God back to our country,” retired neurosurgeon Ben Carson told a campaign forum at Prestonwood Baptist Church near Dallas.

From opposition to abortion and gay marriage, to support for Israel and the fight against the Islamic State, Carson and other Republican candidates — Ted Cruz, Jeb Bush, Carly Fiorina, Rick Santorum and Mike Huckabee — drew repeated ovations at the event co-sponsored by the Faith & Freedom Coalition.

“I believe 2016 is going to be a religious liberty election,” said Cruz, a Texas senator who had many backers at the mega-church; Fiorina, a businesswoman, told the crowd that “people of faith make better leaders.” 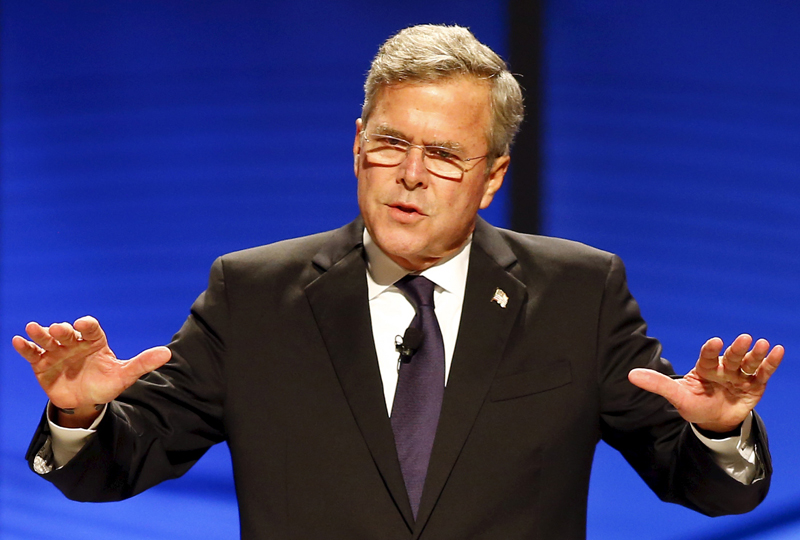 U.S. Republican presidential candidate and former Governor Jeb Bush speaks at the North Texas Presidential Forum hosted by the Faith & Freedom Coalition and Prestonwood Baptist Church in Plano, Texas on October 18, 2015. Photo courtesy of REUTERS/Mike Stone
*Editors: This photo may only be republished with RNS-FAITH-POLITICS, originally transmitted on Oct. 19, 2015.

Bush, the son and brother of previous presidents, talked about a “faith journey” that has included a conversion to Catholicism, “a partnership with Jesus Christ” and a commitment to a “culture of life.”

Santorum, a former Pennsylvania senator who rode religious support to a narrow win in the 2012 Iowa caucuses, touted his long-time support from evangelical groups, while former Arkansas governor and Baptist preacher Huckabee denounced abortion as “uncivilized savagery for which we must repent.”

Each of the Republican candidates is seeking to appeal to a constituency that has major influence in early delegate contest states such as Iowa, South Carolina and Texas.

The idea is to “connect candidates and their messages with people of faith who are potential voters,” said Timothy Head, executive director of the Faith & Freedom Coalition. “The conservative Christian vote still remains the largest political constituency in all of American politics.”

Among the issues that surfaced during the forum: Abortion, the role of faith in political life, attempts to end federal funding for Planned Parenthood and religious liberty in the wake of the Supreme Court sanctioning gay marriage.

The candidates also discussed issues such as President Obama’s health care plan, judicial appointments, the economy, Israel and the Middle East and the fight against Islamic extremism.

Appearing in a cavernous, theater-style sanctuary, each of the candidates made speeches and then sat for an interview with Prestonwood pastor Jack Graham.

Organizers of the event invited all the presidential candidates from both parties. The six Republicans who accepted are all chasing one of the candidates who declined: Donald Trump, who is leading the pack in GOP preference polls.

Carson, who is second to Trump in many surveys, is looking to consolidate his already strong support among evangelical voters. They are a large part of his support in Iowa, where February caucuses will be the first delegate selection contest of the 2016 race.

“We need to remind people that we do have a Judeo-Christian foundation” in the United States, Carson told the crowd at Prestonwood.

South Carolina, which also has a high number of evangelicals in its Republican electorate, hosts the first southern primary of the contest later in February. The Texas primary is March 1; it’s one of several southern states holding primaries that day.

Fiorina — another of the “outsider” Republican candidates who have never held public office — touted her corporate experience and pledged to be “fearless in defending the character of this nation.” She is looking to build support among religious conservatives, who are not her natural constituency.

Bush faces a similar situation. He has less support among evangelicals and religious conservatives than brother George W. Bush did when he won the presidency twice. In his remarks at Prestonwood, Bush stressed his “pro-life” record while governor of Florida.

Cruz enjoyed a home field advantage at the Faith & Freedom Coalition, telling a cheering crowd, “God bless the great state of Texas.” The U.S. senator from the Lone Star State, who received several standing ovations, is also making an appeal to evangelicals a major part of his campaign in Iowa.

Sunday’s forum also featured the winners of the last two Iowa Republican caucuses, both with big support from evangelicals: Huckabee in 2008 and Santorum in 2012.

Santorum talked about how he has been demonized for opposing gay marriage, and asked worshipers to pray for the families of all the candidates who have to endure such a difficult process. “Please pray for our spouses and our children,” he said.

In his remarks, Huckabee again defended the county clerk in Kentucky sent to jail for refusing to issue marriage licenses to gay couples, saying she was standing up for conscience.