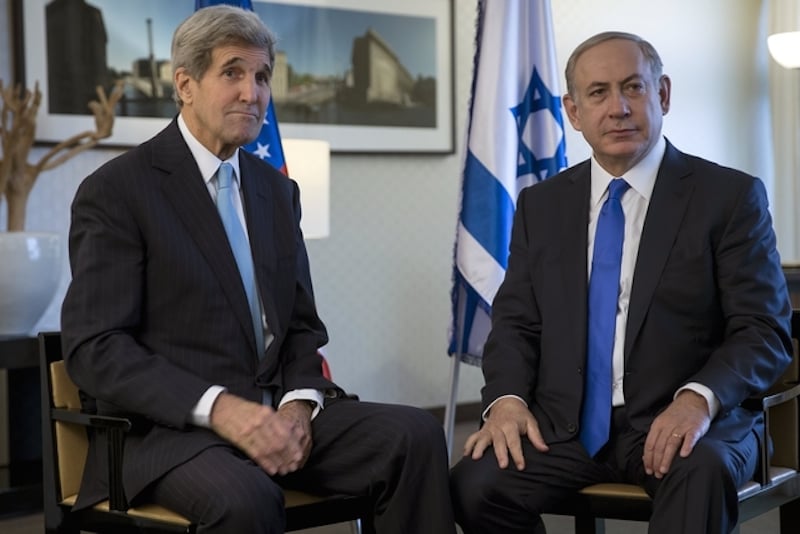 BERLIN (Reuters) – U.S. Secretary of State John Kerry called on Thursday for an end to inflammatory Israeli-Palestinian rhetoric as he met Israeli Prime Minister Benjamin Netanyahu, who blamed the Palestinians for a recent surge of violence.

Speaking to reporters before their talks, Kerry made no reference to Netanyahu’s suggestion this week that Haj Amin al-Husseini, the Mufti of Jerusalem during the 1940s, persuaded Adolf Hitler to exterminate the Jews.

Those comments, which come after three weeks of Israeli-Palestinian violence, have attracted wide criticism from Israeli opposition politicians and Holocaust experts, who accused the prime minister of distorting the historical record.

Among the causes of the turmoil are Palestinians’ anger at what they see as Jewish encroachment on the al-Aqsa mosque compound in Jerusalem’s Old City, Islam’s holiest site outside Saudi Arabia, which is also revered by Jews as the location of two ancient temples.

“It is absolutely critical to end all incitement, to end all violence and to find a road forward to build the possibility, which is not there today, for a larger process,” Kerry told reporters as he and Netanyahu posed for pictures.

Kerry said he hoped that the two men could agree on steps “that take us beyond the condemnations and beyond the rhetoric.”

Diplomats hold out little hope for any resumption of broader Israeli-Palestinian peace talks, which collapsed in 2014.

Netanyahu blamed the Palestinians for the recent surge in killings, singling out Palestinian President Mahmoud Abbas.

“There is no question that wave of attacks is driven directly by incitement. Incitement from Hamas, incitement from the Islamist movement in Israel, and incitement, I am sorry to say, from President Abbas,” he said.

A senior U.S. State Department official told reporters that Kerry hopes to persuade both sides to “tamp down” their rhetoric during a four-day trip to Europe and the Middle East in which he also plans to meet Abbas and Jordan’s King Abdullah.

His tone mirrored that of German Chancellor Angela Merkel at a joint news conference with Netanyahu on Wednesday evening.

“We have to do everything to calm down the situation and in this spirit I think all sides need to make a contribution,” she said.

It is not clear why Netanyahu launched into the issue of the then-Mufti of Jerusalem, Husseini. His remarks come with Israeli-Palestinian tensions at a new peak, notably over the Jerusalem holy site overseen by the current mufti. 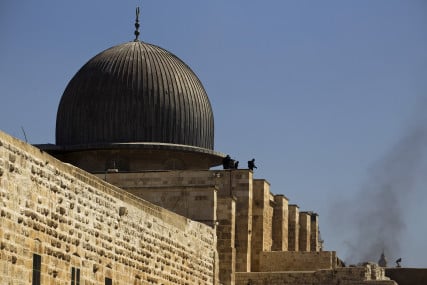 Israeli police officers take positions on the roof of al-Aqsa mosque during clashes with Palestinians in Jerusalem’s Old City on September 28, 2015. Photo courtesy of REUTERS/Amir Cohen

Israel says it respects the status quo, which allows tourists and non-Muslim visitors to enter the Al Aqsa compound at some hours but forbids non-Muslim prayer.

Palestinians say that ultra-Orthodox and national-religious Jews are exploiting the rules to enter the area, called the Noble Sanctuary by Muslims and the Temple Mount by Jews, in growing numbers and surreptitiously pray there, in breach of the status quo.

Israel says it expels anyone who prays, but the practice continues and some Israel government ministers have been open about encouraging Jewish access to the area, saying all monotheistic religions should have the right to pray.

U.S. officials say they hope a change in the rhetoric over the holy site could help ease tensions more generally.

News
‘Anti-feminist’ vandals in Israel deface images of women
Follow us on Facebook!
Submit your photos to RNS