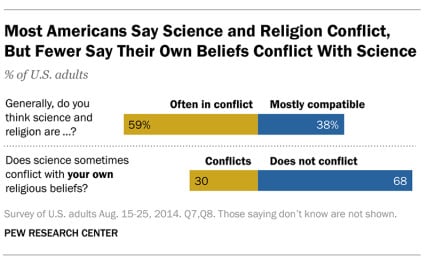 “Most Americans Say Science and Religion Conflict, But Fewer Say Their Own Beliefs Conflict With Science.” Graphic courtesy of Pew Research Center

(RNS) Most Americans see a conflict between the findings of science and the teachings of religion.

But “see” is the operative word in a new Pew Research Center report issued Thursday (Oct. 22).

While 59 percent of U.S. adults say they saw science and religion in conflict, that drops to 30 percent when people are asked about their own religious beliefs.

It turns out that the most highly religious were least likely to see conflict.

And those who said they saw the most conflict between the two worldviews in society are people who personally claimed no religious brand, the “nones,” according to the report.

“Our perceptions of others are often different than our perceptions of ourselves and this plays out here. It’s the most striking finding,” said Cary Funk, associate director of research and co-author of the report. 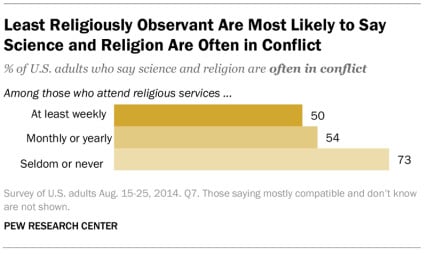 “Least Religiously Observant Are Most Likely to Say Science and Religion Are Often in Conflict.” Graphic courtesy of Pew Research Center

The report is an analysis of several surveys but chiefly relies on a 2014 survey of 2,002 U.S. adults conducted in collaboration with the American Association for the Advancement of Science. In that survey:

READ: God knows, evangelicals are more science-friendly than you think

The analysis looked at 20 science issues and found that on most — including climate change, genetically modified foods and space exploration — religious differences were part of a matrix of influences that include age, gender, education, political affiliation and ideology.

Funk said the analysis found “only a handful of areas where people’s religious beliefs and practices have a strong connection to their views about science.”

The hot topics were views on the creation of the universe, on evolution and on whether religious congregations should take positions in debates over public policies on scientific issues.

Overall, half of Americans (50 percent) said congregations should express their views on policy decisions about scientific issues and 46 percent said they should not.

Catholics were the most divided, with 49 percent saying churches should not express their views and 45 percent calling for churches to speak up. (The main survey relied on an August 2014 analysis, one year before Pope Francis issued a powerful teaching document on the environment citing scientific voices calling for action on climate change.) 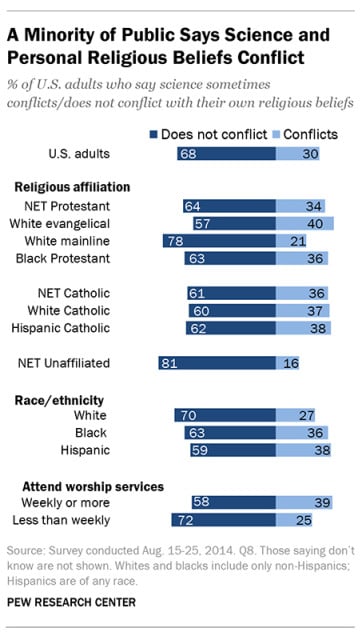 About 2 in 3 white evangelicals (69 percent) and black Protestants (66 percent) supported churches’ expressing views. But most of those with no religious affiliation (66 percent) were firmly against it.

(The margin of error was plus or minus 3.1 percentage points for overall findings but higher for subgroups, ruling out analysis of Jews, Muslims, Hindu and other small religious groups.)

The Pew analysis found wide differences among major religious groups when it came to perceptions of scientists. People were asked whether they saw scientists as divided or united on the creation of the universe.

The nones were the only major group in which a majority (61 percent) said scientists were unanimous that “the universe was created in a single, violent event.”

That Big Bang theory doesn’t resound for most others, however.

Overall, 42 percent of U.S. adults perceived scientific consensus about the creation of the universe.

Most (52 percent) see scientists as divided, including nearly 7 in 10 (69 percent) of white evangelicals and 62 percent of Hispanics Catholics. 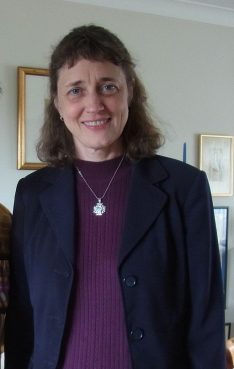 Jennifer Wiseman, an astronomer, is program director for the the American Association for the Advancement of Science’s Dialogue on Science, Ethics and Religion.

The AAAS, mindful of how attitudes toward science can influence society, just finished a three-year “Perceptions Project” through its Dialogue on Science, Ethics and Religion to engage religious communities, particularly evangelicals, in conversation with scientists.

The perception gap highlighted by the Pew analysis can be addressed by building bridges between both groups so that they don’t rely on “media stereotypes,” said Jennifer Wiseman, an astronomer and program director for DoSer.

“We found that everyone from the least to the most religious seems fundamentally interested and positive about science,” she said.

Although there were “a few areas where people stand apart,” Wiseman said, “we found a lot of shared desire to use science and technology for the betterment of the world and the human condition. There’s a lot of common ground.”