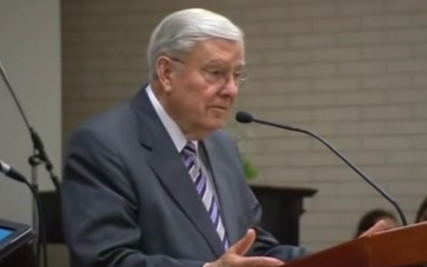 A snippet of a speech by LDS Apostle M. Russell Ballard began making the rounds of the Internet yesterday, even though the original comments were made at a young adult devotional in Buenos Aires in February 2014.

In particular, Elder Ballard’s remarks about Roman Catholics not knowing God, Jesus, or the Holy Ghost have raised hackles among Mormons and non-Mormons alike.

The entire hour-long speech is available on YouTube here; Elder Ballard’s comments about Catholics begin around the 59 minute mark.

And we know who they are because Joseph knelt in the presence of the Father and the Son, and our Father introduced the Savior to him in these words: “Joseph, this is my beloved son. Hear him.” A boy, who then was nurtured and trained by the Savior of the world to restore the fullness of the everlasting gospel of Jesus Christ to the earth.

Elder Ballard then goes on to present Joseph Smith’s sterling apostolic creds—essentially out Catholicking the Catholics in the matter of ecclesiastical authority. Joseph was ordained by Peter, James, and John, who laid their hands on Joseph’s head.

The good news is that the thirty-second clip that’s available on TubeChop is the only example in Elder Ballard’s entire hour-long speech of any disparaging remarks about members of other churches. (Though in other news, some listeners will likely object to the strong mandate he gives the young men in his audience to “GET MARRIED!” and start having babies ASAP, even if they can’t afford it.)

The bad news—and it is discouraging—is that his remarks about Catholicism represent a regrettable step backwards in Mormon attitudes toward other faiths.

In recent years, Mormon leaders’ rhetoric about other Christian faiths has been of the supersessionist variety: as President Hinckley put it in 1998, “Let me say that we appreciate the truth in all churches and the good which they do. We say to the people, in effect, you bring with you all the good that you have, and then let us see if we can add to it. That is the spirit of this work. That is the essence of our missionary service.”

In Hinckley’s approach, other faiths are not laboring in ignorance or darkness. Their adherents are good people who enjoy the light of truth. Mormonism can add even more goodness to that (the supersessionist element) and another level of divine fulfillment—but the seeds of truth were already there.

Supersessionism is still elevating ourselves above others, and we could have a long and fruitful discussion about whether that’s even helpful. But the supersessionist approach is a darn sight more sensitive than what Elder Ballard seems to suggest here, which is that Catholics have no knowledge and nothing to offer to Latter-day Saints, who already “know” all the truth we need.

So let me testify right now of the beauty of Catholicism. I have learned as much about God, Christ, and the Holy Spirit from Catholic thinkers as I have from LDS ones, and I am grateful for the truths that have been born from 2,000 years of Catholic wisdom and history.

As a child and teenager, I learned about the Lord from our Catholic neighbors down the street, who were surrogate parents to me. When I went away to college, the mother prayed the rosary every day for her three children—and for me.

Today I am happy to see my daughter enjoying the privilege of a loving, rigorous, and justice-oriented Marianist education.

I would not be the Christian I am slowly becoming without the writings of James Martin, Joan Chittister, and Thomas Merton; the music of John Michael Talbot; or the respite of several meaningful retreats at the Abbey of Gethsemani.

These are just a few of the gifts Catholicism has brought into my life. To say that Catholics “don’t know who God is. They don’t know who the Savior is; nor do they know who the Holy Ghost is” is simply untrue—and unworthy.