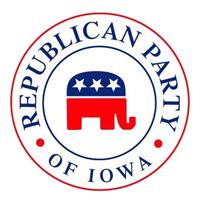 Seal of the Iowa Republican Party

In Iowa, for sure. A month ago, Quinnipiac had Trump leading Ben Carson 27 percent to 21 percent among likely Republican caucus-goers. Now Carson is ahead of Trump 28 percent to 20 percent, according to the latest Q-poll .

The explanation is that whereas around Labor Day Iowa evangelicals supported Carson over Trump by a modest seven points (27-20), they currently do so by better than two-to-one (36-17). The latest Bloomberg/Des Moines Register poll shows the same shift. The only other candidate with double-digit appeal to evangelicals is preacher’s son Ted Cruz (13), just where he was a month ago.

For three decades, the question in contested GOP presidential primaries has been: Which establishment candidate is going to get the evangelical base to support him? The answers were George H. W. Bush (1988), Bob Dole (1996), George W. Bush (2000), John McCain (2008), and Mitt Romney (2012).

In the last two election cycles, the evangelicals were noticeably harder to round up. In Iowa, where they constitute nearly 60 percent of GOP caucus-goers, they made winners of Mike Huckabee and Rick Santorum, and kept their candidacies alive longer than either deserved.

The problem for the Republican establishment is that, thus far, the evangelicals don’t like any of its candidates. At the moment, its best shot seems to be Marco Rubio, he of shifting religious identities — Catholic, Mormon, evangelical, and Catholic again. In the latest Iowa Q-poll, Rubio comes in third, with 13 percent of all Republicans and nine percent of evangelicals. Not since Barry Goldwater captured the nomination in 1964, has the establishment had so long a row to hoe.