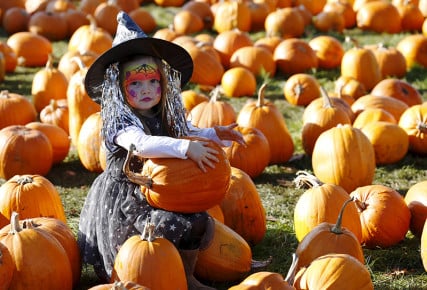 Dressed as a witch, Maisy Thompson plays with pumpkins in the pumpkin patch ahead of Halloween at Crockford Bridge Farm at Addlestone near Woking, southern Britain, on Monday (Oct. 26, 2015). Photo courtesy of REUTERS/Luke MacGregor
*Editors: This photo may only be republished with RNS-SPLAINER-WITCH, originally transmitted on Oct. 27, 2015.

(RNS) Dress as a witch this Halloween and you have a frighteningly high chance of meeting other witches on the trick-or-treat trail. That’s because the National Retail Federation predicts the witch will be the most popular Halloween costume for the 11th year in a row — and that’s just among adults, with 4.3 million saying they plan to wear black and pick up a broomstick and a pointy hat.

But that image of a witch is one most cultures, both ancient and contemporary, would not recognize. To the ancient Greeks, the witch Circe lived in a mansion and helped Odysseus get home (eventually), while the Bible depicts the Witch of Endor as giving comfort to a distraught King Saul. How did our image of the Halloween witch evolve, and why? Let us ‘Splain . . .

Q: Why do witches wear black?

A:  Witches wear black only in our contemporary imagination. The first witches were healers, herbalists, midwives and wise women — village women who likely wore homemade dresses and robes that blended in with the outdoors they roamed for the goods of their trade. Our American idea of a witch in black likely comes from two sources:

Q: Yeah, but the Wicked Witch of the West had flying monkeys! And all I get as a Halloween witch is a stupid cat! How did that happen?

A: Witches are often shown with “familiars” — animals thought to do their bidding. But the cat is only one of a long list of creatures thought to cavort with witches — goats, toads, dogs, snakes and even cattle were sometimes associated with witches. But try to get one of those on a broomstick! Other cultures associate different animals with witches. In Japan, they are thought to have sinister pet foxes. Meow!

A:  Witches didn’t always ride broomsticks. In the 15th and 16th centuries, illustrations show them riding goats, stools, even cupboards. By the 17th century, witches are shown riding out of chimneys. Scholars speculate this evolved as women grew more linked with the hearth and and less with the farm and the field. So what fits up a chimney and is kept by the hearth? A broomstick. Then there’s the less-G-rated version — women believed to be witches often dealt in hallucinogenic herbs. They got, quite literally, high. “Some historical accounts suggest witches applied these ointments to their nether regions,” writes Megan Gannon at LiveScience, in an attempt to explain how witches might fly.

Q: Why do we think of witches as evil? Why aren’t we dressing as, say, politicians on Halloween?

A: Thank Christianity for that. In 785, the church banned belief in witches and ignored them for a couple centuries. But by the mid-1400s, Pope Innocent VIII, faced with challenges within the church, went after heretics — including witches. By 1515, 500 witches were burned in the city of Geneva. Two years later, Martin Luther nailed his 95 theses to the door of the Wittenberg cathedral and witch hunts began in earnest. From 1500 to 1660, between 50,000 and 80,000 suspected witches were killed in Europe, according to scholar Douglas Linder. The vast majority of those killed were women. By 1611, when William Shakespeare needed a dark force to kick off the action in “Macbeth,” all the elements of the contemporary witch were there in his “weird sisters” — the steaming cauldron, magic potions, creeping familiars and women who can conjure spirits and fly away.

Q: Are there real witches today?

A: You bet — though most prefer the original Old English word “wicca” to “witch.” Most are neo-pagans — people who revive pre-Christian religions and give them a contemporary twist — and there are many men in their ranks. Today’s Wiccans focus more on “good” or “white” magic, crafting “spells,” which are a kind of prayer or intention to the Goddess. And in a real twist, there is a even a “church” and “school” of Wicca, the latter offering an “essential witchcraft course” for $190. That and a broomstick should stand you in good stead for more treats than tricks.

News
In Oregon, churches and anti-fascists unite to provide mutual aid to fire evacuees and others in need
News
‘More than individual sin’ — Black pastors urge evangelicals to admit systemic racism
Beliefs
Four young people of different faiths move into a home together, then a pandemic happens
Opinion
Warning: Your piety might be dangerous to your health
Catholicism
Pope Francis: This Halloween, take time to reflect on the ‘three deaths’
© Copyright 2020, Religion News Service. All rights reserved. Use of and/or registration on any portion of this site constitutes acceptance of our User Agreement and Privacy Policy, Privacy Statement and Cookie Notice. The material on this site may not be reproduced, distributed, transmitted, cached or otherwise used, except with the prior written permission of Religion News Service.