(RNS) — This weekend marks the observance of Pentecost and Shavuot, holy days to Christians and Jews respectively. And both involve certain “gifts” that don’t come with wrapping and bows. Let us ’Splain …

Pentecost Sunday (May 20) marks the day most Christians believe the Holy Spirit descended on the followers of Jesus after his death, resurrection and ascension. The story comes from the New Testament Book of Acts: “Suddenly a sound like the blowing of a violent wind came from heaven and filled the whole house where they were sitting. They saw what seemed to be tongues of fire that separated and came to rest on each of them. All of them were filled with the Holy Spirit and began to speak in other tongues as the Spirit enabled them.” Jesus’ followers were amazed — they could speak languages they never knew before and they could understand others they had never heard. The Apostle Peter stood up and preached his first sermon — so many Christians think of this holiday as the “birthday” of the church. 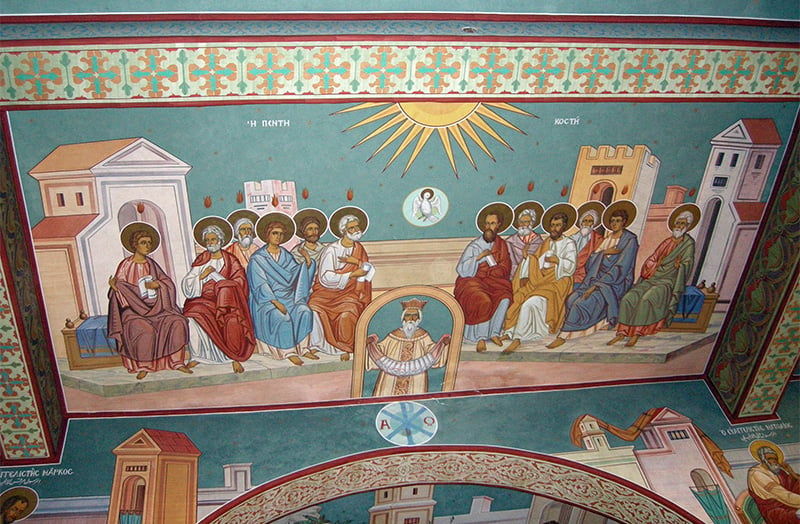 A depiction of Pentecost in the Cathedral of Our Lady of the Annunciation in Jerusalem. Image courtesy of Creative Commons

What does that have to do with Shavuot?

A lot! Shavuot is called the “Festival of Weeks” because it is held seven weeks (and one day) after the second night of Passover. Originally tied to an ancient grain festival, it eventually became the holiday that marks God’s giving of the Torah to Moses on Mount Sinai.

The link between the two holidays lies in their names. “Pentecost” comes from the Greek word “pentekostos,” which means 50. Pentecost comes 50 days after Easter, when Christians believe Jesus rose from the dead. And 50 days also represents the gap between Passover’s second day and Shavuot. Some scholars believe Pentecost owes its name to Jesus’ Jewish followers who were gathered together to observe the festival of Shavuot.

What do these two holidays mean to contemporary Christians and Jews?

This is where the idea of “gifts” comes in. On Shavuot, which starts this year on Saturday evening, Jews mark not just the giving of the Torah by God, but their acceptance of the Torah. Some Jewish writers have compared the exchange to a marriage or other sacred covenant. One way the holiday is observed is through the reading of the Book of Ruth, the story of a woman who converts to Judaism and accepts the Torah.

The gifts of the first Pentecost have different meanings to different Christians. Some interpret them as the spiritual benefits of accepting Jesus that bring a more meaningful earthly life. Others — especially those Christians known as Pentecostals — believe the first Pentecost gave all followers of Jesus “the gifts of the Spirit” — speaking in and interpreting tongues, the ability to prophesy, the power to heal by touch, the ability to discern spirits. Pentecostals believe those things are available to all Christians, and only those who accept them are able to fulfill the work and destiny that God has laid out for them.

I like gifts. What did you get me for Pentecost and Shavuot?

Sorry, neither Christians nor Jews exchange presents on Pentecost or Shavuot. Nor do they eat cake. Some Jews mark Shavuot by decorating their homes with spring flowers; others stay up during the first night of the festival — this year from sundown on Saturday to sundown on Monday — to read the Torah. They go to synagogue, where the Ten Commandments — the foundational laws they believe were given to Moses on Sinai — are read aloud. Christians generally mark Pentecost by a reading from Acts, and some wear all white, or all red. In medieval Britain, Pentecost was sometimes called “White Sunday” — or Whitsunday — for the custom of wearing white.