Where were we? Oh, right–just so humbled to live in this messy space together as we seek to fill the God-shaped hole in all of us. Today, we take a look at some more of the groupspeak that lets you know you’re in the weirdest club in town: Evangelicalism. Language has always been used to denote who’s in and who’s out when it comes to certain groups, and these words and phrases are like a dog whistle to a certain kind of Christian. Use them at your own risk.

Missional
Definition: (1) Adopting the mindset or practices of a missionary in your local, first-world circumstances; (2) emphasizing the mission of God as you understand it above other ecclesial priorities
Example: “In many cases, the phrase missional church simply puts new clothes on old trends, such as the seeker-sensitive church movement.” Source.
What’s weird: What? Everything is weird! This is not a word! I mean, it is, but it just means “relating to a mission,” which all churches have always done throughout all of time–some better than others, but no church has been created by people who were like, “Eh, we don’t really have a mission, we just want to eat donuts together.” That’s an eating club, not a church. Like “emergent” before it and whatever weird word comes next, “missional” is vague, nondescript, and so broad as to be pretty much meaningless. 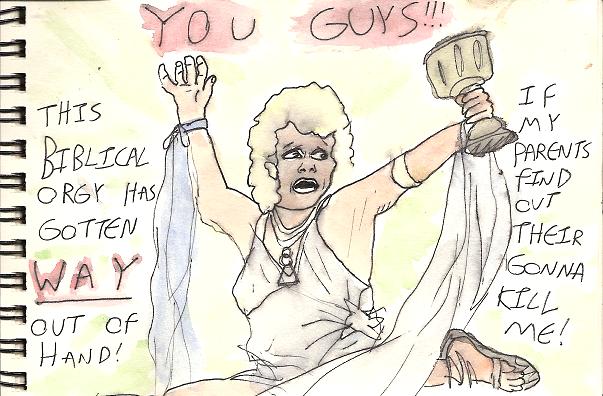 But it’s Biblical! Image by Will Laren via Flickr (http://bit.ly/20xM9jG)

Biblical
Definition: Contained in the Bible.
Example: “There are clear biblical mandates for us that godly women are to cultivate a quiet trust before the Lord.” Source.
What’s weird: The word “Biblical” is like the last episode of Lost: Everyone thinks they have the market on what it really means. Technically, it is Biblical to rape your neighbor’s wife and have her husband killed in battle. David did it! It’s in the Bible! It is often used to mean things that are praiseworthy or virtuous, because Christians revere the Bible, but disagreements over what constitutes Biblicalism (is that a word?) have lead to opposing sides taking potshots at each other over everything from gender roles to sexuality to drinking alcohol. It used to be that a number of Christian colleges prohibited dancing, but have since updated their policies to allow for some forms of it. Did dancing used to be unbiblical (David also did it!) and through some form of revelation become okay?

Servant’s Heart
Definition: The gift or desire to serve other people, personified in the person of Jesus.
Example: Tim Tebow wants a to marry “someone sweet and kind—and that has a servant’s heart.” Source.
What’s weird: This phrase has become so gendered that it’s impossible to use as it was originally meant to be. It isn’t in the Bible, although the Bible does enjoin Christians to serve one another and it talks about the condition of our hearts. But it’s almost exclusively used to describe Christian women. Two of my good friends attended Thanksgiving dinner at the home of another friend, and when they got up and started clearing the table, a third couple thanked them by saying, “You two have such servant’s hearts!” The third couple did nothing to assist in the clearing of the table. Saying someone has a “servant’s heart” can be a way for entitled people to feel good for praising those who serve, and that’s why it’s bullshit.

Modest is Hottest
Definition: I mean, does it need explaining? This is the idea that Christian women are “hottest”–i.e., most attractive to men–when they dress modestly.
Example: “Take out a pink Sharpie, and take note, girls: Modest really is hottest.” Source.
What’s weird: My friend Sharon wrote a great post about how this phrase is hurting Christian women.”Making modesty sexy is not the solution we need,” she wrote. “Instead, the church needs to overhaul its theology of the female body.” Modesty in the Bible has much more to do with behavior–the way we comport ourselves–than with how we dress. Yet every young Christian girl who went to summer camp knew better than to wear a bikini, unless she wanted to be judged. “Modesty” was one of the four M’s, a funny set of rules put to song every year at the church camp I attended. It wasn’t as severe as it was in other places, where Christian women are still made to wear long, loose clothing and feel shame at their bodies, but I can tell you it was never a yardstick for the boys. The harm that this phrase can do is almost unlimited, and it plays into all the worst stereotypes about gender: Men are sex robots who cannot take you seriously if you look somewhat attractive, and women’s bodies are bad and not to be enjoyed. There are so many better ways to talk about appearance and image than to make women feel bad about themselves.