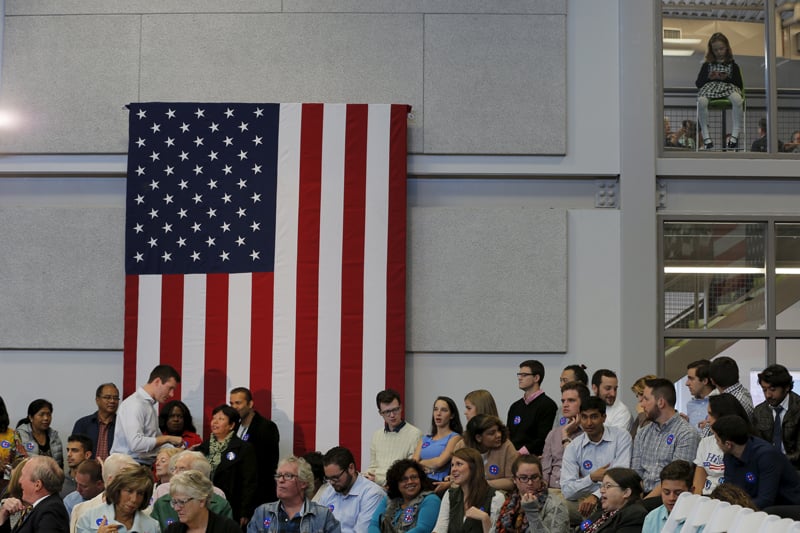 A girl, top right, sits above a campaign town hall meeting with Democratic presidential candidate Hillary Clinton in Manchester, N.H., on Oct. 5, 2015. Photo courtesy of REUTERS/Brian Snyder
*Editors: This photo may only be republished with RNS-NONBELIEVER-POLITICS, originally transmitted on Nov. 5, 2015.

(RNS) Political candidates are facing a new reality: Within the Democratic coalition, there are more religiously unaffiliated voters than belong to any single religious group.

This is a significant change in American politics, where nonbelief has long been a liability.

Survey data show that Americans with no religious affiliation are a growing share of both major political parties. But the trend is particularly strong within the Democratic coalition, where the unaffiliated now represent 28 percent of those voters, according to a new Pew Research study.

Given their expanding share of the electoral pie, and their political alignment, some have argued that their rise bodes ill for Republicans and well for Democrats. Religiously unaffiliated voters, known as “nones,” showed their preference for the Democratic presidential candidate in 2008, giving Barack Obama 75 percent of their votes, and 70 percent when he ran for re-election in 2012.

But the rise of the nones may not translate into more Democratic votes so easily.

“Politically speaking, religious nones seem to punch a little bit below their weight,” said Gregory A. Smith, Pew’s associate director of research. It’s a finding in the report, he said, “that suggests that the political consequences of the growth of the nones might not be as pronounced as the consequences for the American religious landscape as a whole.” 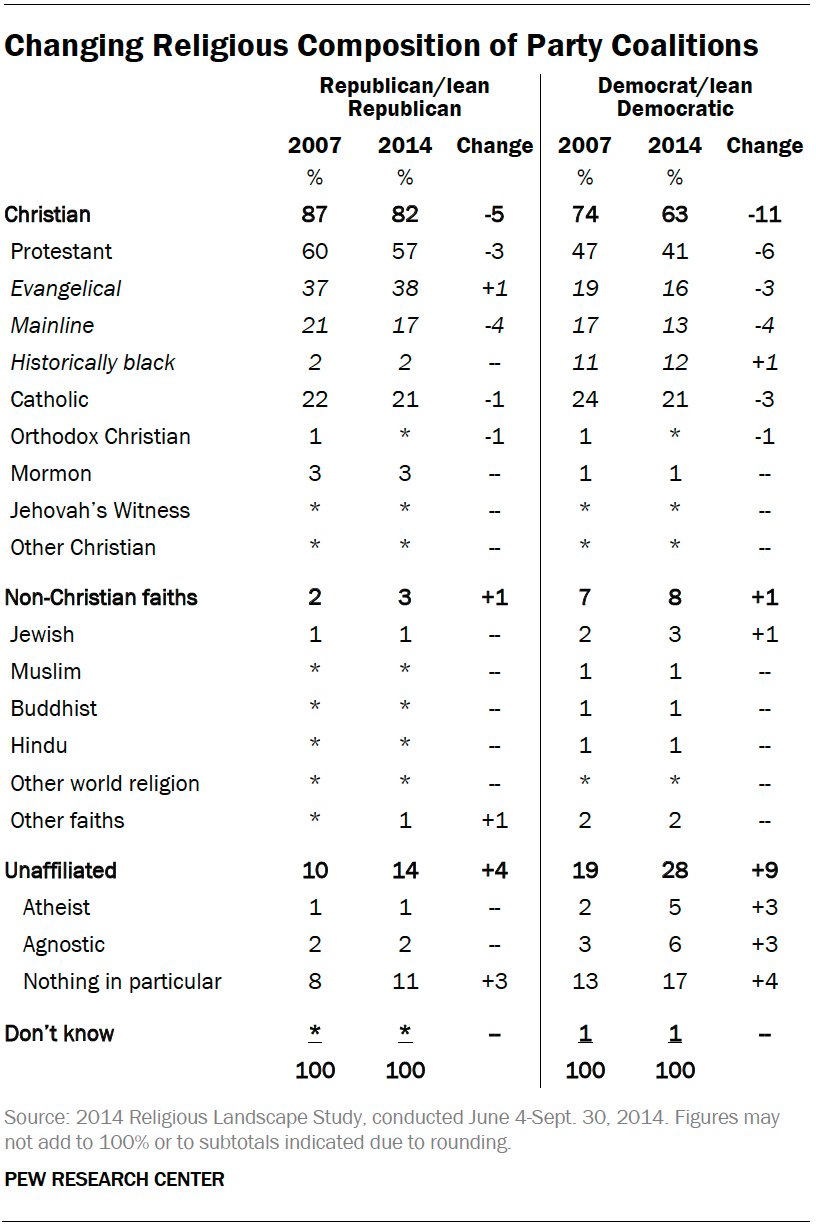 According to Pew, 62 percent of nones are registered to vote, compared with 71 percent of Americans affiliated with a religion.

The nones are also a difficult group for politicians to define and woo, said Dan Cox, research director at the Public Religion Research Institute. They’re not cohesive, in that they include atheists and agnostics but also believers unattached to religious institutions. And unlike the pursuit of an actual religious group, it’s not so clear how to connect with the millions of people defined by their lack of religious connections.

“If I want to reach out to Jewish voters or African-American Protestants or Latino Catholics, I know where to go,” Cox said. “There are institutions where these folks congregate.” The nones, by contrast, have no presiding bishop, no pews, no holiday celebrations at which politicians can press the flesh.

Despite these challenges, parties need to take the nones seriously, he added, “because they’re growing at a pretty dramatic rate.”

Since 2007, the last time Pew did its U.S. Religious Landscape Study, the nones have jumped by 9 percentage points among Democrats and those who lean Democratic. Catholics make up the next largest group, at 21 percent, followed by evangelicals at 16.

Questions about the nones face Republicans too, though to a lesser extent. GOP nones are rising more slowly — by 4 percentage points since 2007 – and now make up 14 percent of Republicans or those who lean Republican. Evangelicals still represent the largest share of red America, followed by Catholics and mainline Protestants.

In light of these trends, for both the Democrats and the GOP, national candidates may be likelier now to appeal to voters in more secular terms.

In some ways the parties have already begun to do this, simply by acknowledging that the nones exist. Obama both raised eyebrows and drew praise when he became the first president to note in an inaugural address that faith does not define all Americans. “We are a nation of Christians and Muslims, Jews and Hindus — and nonbelievers,” he said in January 2009. 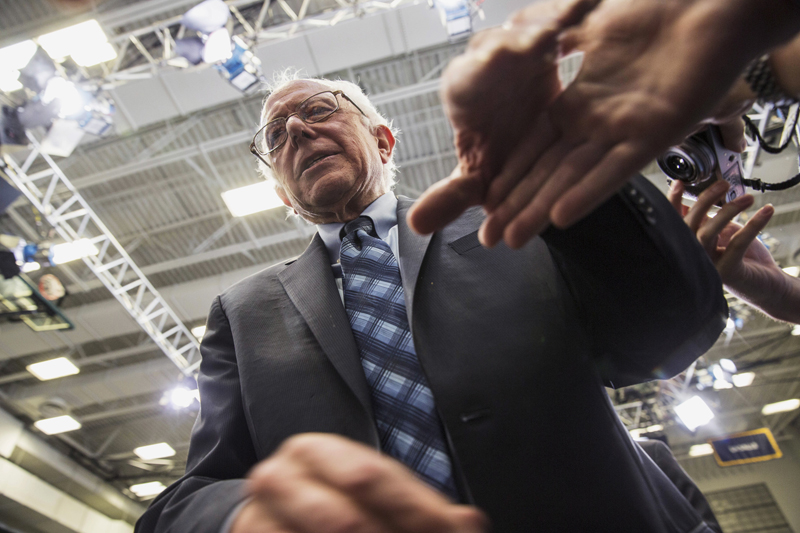 Democratic presidential candidate Sen. Bernie Sanders shakes hands after a town hall meeting with students at George Mason University in Fairfax, Va., on Oct. 28, 2015. Photo courtesy of REUTERS/Joshua Roberts *Editors: This photo may only be republished with RNS-NONBELIEVER-POLITICS, originally transmitted on Nov. 5, 2015.

And the unexpectedly strong showing in the polls of Democratic presidential candidate Bernie Sanders, who is Jewish but unabashedly irreligious, indicates that a national candidate may no longer need to tout his religious credentials to appeal to a large swath of the electorate — though he did give a speech at the evangelical Liberty University in September.

Back during the Cold War, candidates railed against “godless communists” while stressing their own piety. In 1954, Congress added the phrase “under God” to the Pledge of Allegiance. But signs show that the insistence on religion, and a Christian one in particular, may be lessening. Congress is becoming more religiously diverse and now includes two Muslims, two Buddhists and a Hindu.

David Kinnaman, president of the Ventura, Calif.-based Barna Group, a market research firm that caters to Christian clients, said he has noticed in recent years that candidates for national office have toned down their religious rhetoric.

“President Clinton regularly quoted Scripture in his speeches,” he said. But now politicians are more mindful of the diversity of religious constituencies and are likely to replace the biblical references with a more general “shared vision of what the nation ought to be and ought to become.”

But Kinnaman said an “increasing sense of pluralism” made itself evident in the widespread condemnation of Republican presidential candidate Ben Carson’s recent remark about his unwillingness to vote for a Muslim for president, and the religiously unaffiliated may also benefit from expectations of tolerance.

Just who are these nones? Twenty-three percent of all Americans, according to the latest Pew report, up from 16 percent in 2007. The vast majority of them say they have no particular religious connection. A fraction call themselves “agnostic” and an even smaller fraction “atheist.” They skew young and liberal, particularly on social issues, and they are not growing more religious as they age.

Secular activists are aware of the nones’ growing numbers and have tried to form a voting bloc. But groups such as the Secular Coalition for America and “AtheistVoter” have a ways to go before they can claim significant influence in American politics. 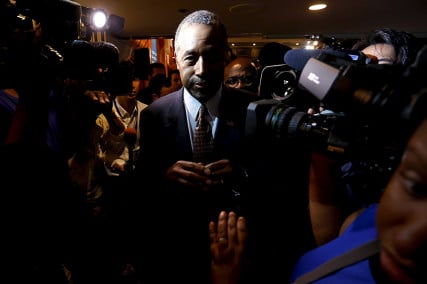 And though it’s not yet clear just how politicians are going to respond to the rise of the religiously unaffiliated, few feel safe ignoring the data, and even Republican political consultants in deeply red states are reviewing the numbers.

You can’t learn too much about the people going to the polls, said Luke Byars, a veteran GOP campaign consultant with First Tuesday Strategies in Columbia, S.C. The 4-percentage-point rise in nones among Republicans nationally is something he wants to track.

“Four percent in an election can be the difference between a close race and a landslide,” he said. “Or defeat and victory.”