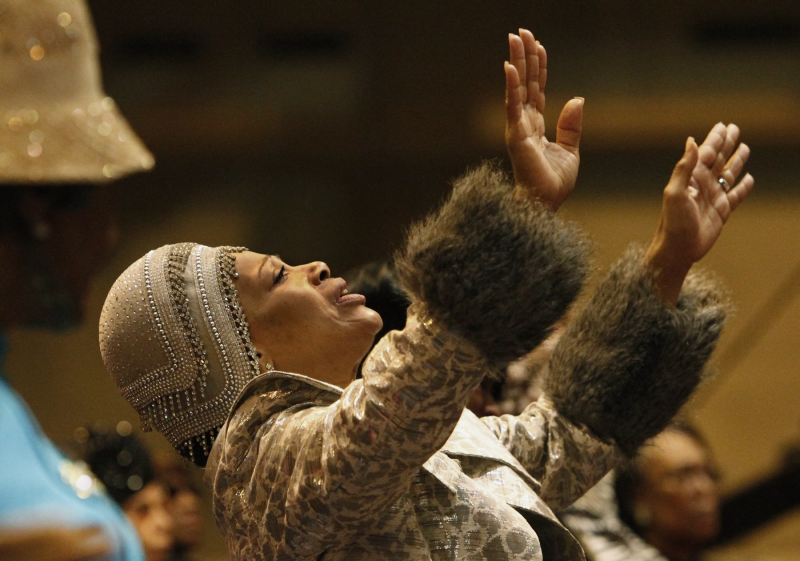 Pamela Pittman, of Oak Park, Ill., prays during the noon church service on Thursday, Nov. 5, 2015, at the Church of God in Christ annual convocation at America’s Center. The convocation continues through Sunday. Photo by J.B. Forbes, St. Louis Post-Dispatch.

ST. LOUIS — Drums, keyboard and a preacher’s belief that God was present in the cavernous convention center nudged thousands of well-dressed “saints” to their feet, many with hands raised.

Rather than “tiptoe through the tulips” with caution, the preacher, Bishop Paul Morton, told them to have “reckless faith.”

“You don’t test the resources of God until you try the impossible,” said Morton, who, sweat rolling down his head, capped off a three-hour worship service.

The Church of God in Christ, or COGIC, is the largest African-American Pentecostal denomination. For one week each year, members converge in downtown St. Louis for Holy Convocation, a gathering sought by cities because it brings in millions of dollars.

In the denomination’s sixth convocation here since leaving home-base Memphis, Tenn., in 2009, members’ charismatic faith is on display. They come from tiny independent churches and megachurches to unite before one pulpit.

They come to be rejuvenated, get on message and celebrate what they believe is the power of the Holy Spirit in action.

Pentecostalism is one of the fastest-growing religious movements in the world, particularly in Africa and Latin America. It’s an experiential faith that followers say transforms lives and empowers people — regardless of social status — to make a difference. 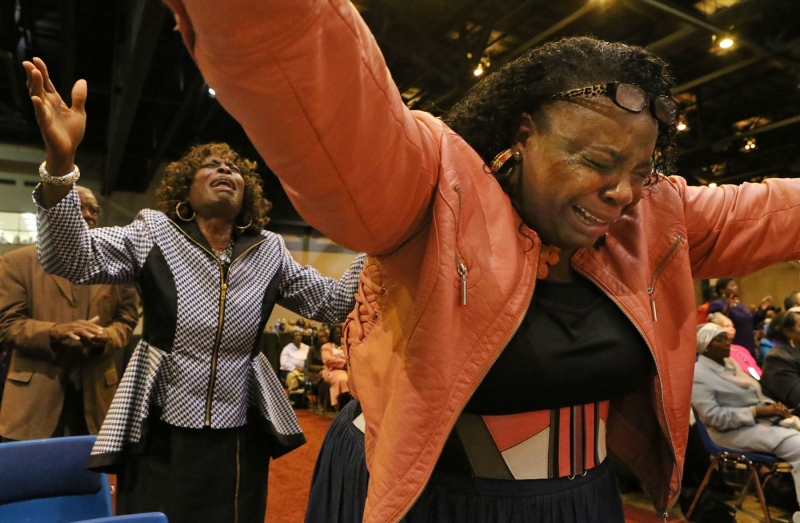 Carolyn Robinson, left, from Buffalo, N.Y., and Marva Chaney from Philadelphia, become emotional during the noon church service on Thursday, Nov. 5, 2015, at the Church of God in Christ annual convocation at America’s Center. The convocation continues through Sunday. Photo by J.B. Forbes, St. Louis Post-Dispatch.

The Church of God in Christ, which reports about 12,000 congregations, is just one of hundreds of Pentecostal denominations.

Often noted for wearing lavish suits, dresses and hats, known as COGIC crowns, the denomination is in U.S. urban centers, small towns throughout the South and increasingly overseas.

The last census of membership by the denomination, done about 15 years ago, counted 6.5 million “saints,” or adherents. Leaders say there are more now. They say the church is growing and putting more emphasis on social justice issues.

“Historically, our church has done a wonderful job of preparing people for eternity, from a spiritual standpoint, but when our presiding bishop came into office he made the decision that we needed to focus even more on preparing people for living in this present world,” said Bishop Edwin Bass, in charge of the denomination’s urban initiatives program.

“It’s a change from our normal business,” said Bass, a former marketing senior vice president for Blue Cross Blue Shield whose home congregation, the Empowered Church, is in Spanish Lake. “The good news is a lot of our churches are on board.”

The Church of God in Christ shares roots with another Pentecostal force farther west on Interstate 44. Springfield, Mo.-based giant Assemblies of God reports 67 million followers, the largest of any Pentecostal denomination. They say a new Assembly of God church is planted somewhere in the world essentially every 50 minutes.

Both denominations believe in a personal conversion experience based on faith in Christ’s death and resurrection and the forgiveness that comes through that. They believe that miracles in the New Testament are happening right now and that speaking in tongues is a manifestation of the Holy Spirit.

They believe faith in Christ can heal anything from terminal cancer to loving the unlovable.

Historically, after a period of coexistence, race separated the two denominations. In the early 1900s, some white ministers left COGIC to help form the Assemblies of God.

In recent years, the white and black leaders of each denomination have been showing unity. In 2014, Assemblies of God General Superintendent George O. Wood spoke at the 150th anniversary celebration for COGIC founder Charles Mason. In August, COGIC Presiding Bishop Charles Blake spoke at the Assemblies of God national convention in Orlando, Fla.

When COGIC pushed for the observance of a “Black Lives Matter Sunday” — after the decisions not to indict police in the deaths of Michael Brown in Ferguson and Eric Garner in Staten Island — Wood wanted to join.

In an email blast to Assemblies of God ministers nationwide, Wood said: “Whatever your opinion of those controversial decisions, can we stand with our brothers and sisters and affirm the value of black lives generally and their lives specifically?”

Wood said that “for a shining moment” early in their church history, race and ethnic background didn’t matter.

“Unfortunately, the forces of segregation reasserted themselves among white Pentecostals, and for many decades thereafter, they allowed the spirit of Jim Crow into their churches,” he said, adding: “If we cannot unite at this hour, how can we expect America to be united, when it has no spiritual foundation for unity?”

Rolling up the sleeves

As in most Pentecostal churches, COGIC is socially conservative. No drinking, smoking, abortions or same-sex marriage. At the previous convocation, there were rumblings on social media about a man who shouted through a microphone near center stage that he had been “delivered” from being homosexual.

The church struggles with gender issues, primarily regarding the role of women amid an aging pool of adherents, said Anthea Butler, author of the book “Women in the Church of God in Christ: Making a Sanctified World.”

“It’s male-dominated, but the women do everything,” said Butler, also an associate professor of religion and Africana studies at the University of Pennsylvania. “What are you going to do in 2015, when you have women who believe they are called to preach? But they are in a church where they can’t be a bishop or can’t be a pastor.”

The denomination seems to be making efforts to celebrate its women. A thick, glossy magazine recently praised 150 influential women in the church. Though women aren’t ordained, women do speak with passion from the pulpit and run ministries.

COGIC advocates from the perspectives of making families strong and protecting unborn children. At the convocation this week, the church announced the “Family Life Campaign,” an ambitious plan to adopt children whom mothers otherwise would have aborted. The church cites news reports that African-American women in the U.S. have a disproportionately high rate of abortion.

“Some 3,446 African-Americans were lynched in the U.S. between 1882 and 1968,” the church said in the campaign announcement. “That number is surpassed in less than three days by abortion in the African-American community.”

As head of missions for the church, Bishop Vincent Mathews, 46, a former principal from Detroit, will oversee the new program. He and his wife and 10 children — “We’ve been blessed,” Mathews said — are based in a historically black township in South Africa.

He seems to fit the recent call from the pulpit to attempt the impossible through faith in Jesus. He wants 10 percent of the flock, including retired couples, to rely on the “supernatural power of God” by adopting a child who would have been aborted or is already in the foster care system.

He said this would make communities safer and be an active example of strong faith.

“Do you really love God?” he said the church leadership was asking. “Do you really want to serve him? Well, it’s not just about coming to a convention looking good. It’s about going home, rolling up your sleeves and taking care of a child who may have been born addicted to drugs.”

Mathews spoke with the cadence of an influential preacher, someone whose heart was on fire.

“And now love that child,” he said. “Stay up all night. Love on that child until he’s right. Now, now you are really serving God.”

EDITOR’S NOTE: This story has been updated to correct details about preacher Paul Morton.

News
Assemblies of God, the largest Pentecostal denomination, hosts biennial convening in Orlando
Follow us on Facebook!
Submit your photos to RNS