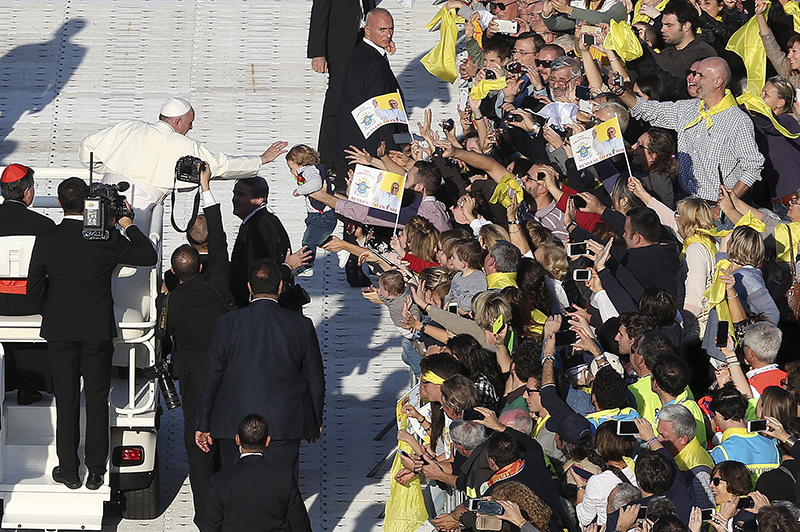 Pope Francis blesses a baby as he arrives to celebrate a mass at the Artemio Franchi stadium during his pastoral visit in Florence on November 10, 2015. Photo courtesy of REUTERS/Stefano Rellandini
November 10, 2015
Rosie Scammell

Pope Francis blesses a baby as he arrives to celebrate a Mass at the Artemio Franchi stadium during his pastoral visit in Florence on Tuesday (Nov. 10, 2015). Photo courtesy of REUTERS/Stefano Rellandini

ROME (RNS) Pope Francis made a whirlwind trip to Tuscany on Tuesday (Nov. 10), during which he addressed immigrant workers, called on Italian bishops to shun power and celebrated Mass with thousands of followers in Florence’s soccer stadium.

Francis started his packed, daylong schedule with a helicopter flight to Prato, known for its textile industry and large Chinese community. Crowds waving the Vatican’s yellow and white flag met him on his arrival.

The pope called for an end to labor exploitation, addressing the deaths of seven Chinese workers in a nighttime factory fire in 2013.

“It is a tragedy of exploitation and of inhumane conditions of life. And this is not undignified work,” he said.

“The life of every community demands that we fight the cancer of corruption all the way, the cancer of the exploitation of human beings and labor, and the poison of illegality,” he added.

The pontiff then flew to nearby Florence, where he spoke to Italian bishops inside the famous Cathedral of Santa Maria del Fiore.

In a lengthy address to members of the Italian bishops’ conference, Francis urged them to avoid remaining “within rules which make us harsh judges, within habits that make us feel safe,” describing faith as “revolutionary.”

He also warned against being “obsessed with power” and said he wanted to see pastors actively helping their communities: “I prefer a church which is bruised, hurting and dirty because it has been out on the streets, rather than a church which is unhealthy from being confined and from clinging to its own security.”

The pontiff’s remarks follow revelations made last week of financial mismanagement and power struggles with the Vatican administration, known as the Curia, which is predominantly staffed by Italians.

Having addressed the bishops, Francis carried through his message by praying with sick and disabled people and eating lunch with a group of poor people. He then traveled to Florence’s soccer stadium, ending his daylong tour by celebrating Mass with thousands of Catholics.

The pope’s successful trip to Tuscany will likely calm fears over his health, a day after Francis stumbled up steps in Rome and following a similar incident at the Vatican on Saturday. Francis was able to adhere to a busy schedule in Prato and Florence, without interruption.