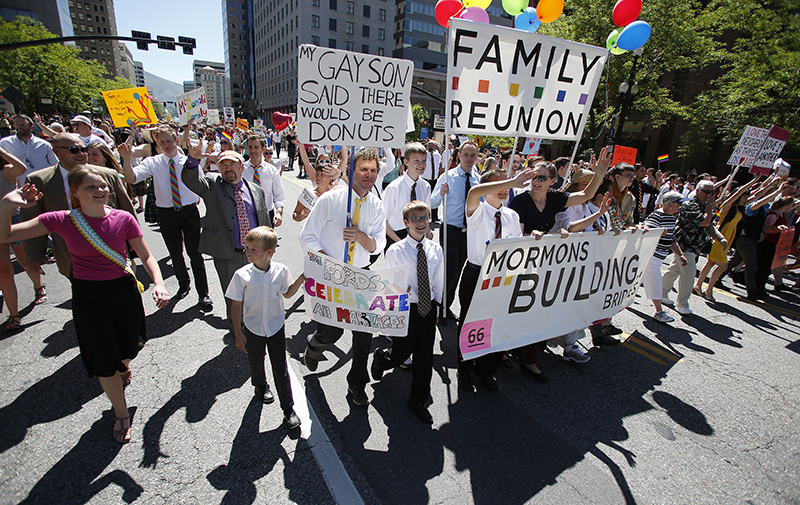 Members of the Mormon church march in a gay pride parade in Salt Lake City on June 2, 2013. Photo courtesy of REUTERS/Jim Urquhart
*Editors: This photo may only be republished with RNS-MORMON-SAMESEX, originally transmitted on Nov. 11, 2015.

(RNS) Gay marriage is now the law of the land and, increasingly, a line in the sand conservative churches say they will not cross.

The latest is the Church of Jesus Christ of Latter-day Saints. Last week (Nov. 5), it issued new guidelines, saying Mormons in same-sex relationships will face possible excommunication and their children will not be permitted to join the church until they are 18 — and then only if they reject their parents’ relationship.

The new policies make the LDS church, with about 15 million members globally, the largest Christian denomination to enact such a formal — and some say draconian — policy. Children of same-sex couples are effectively denied baptism and other ordinances of the church.

“I am sure everyone feels regret about this,” said D. Michael Quinn, a scholar who was excommunicated by the LDS church in 1993 but still considers himself a Mormon. “The leaders who have instituted this have done so without any relish. They have done so with regret. All Mormons down the line will look at it as regrettable.”

Mormons are not the only religious group that strongly rejects gay marriage. The Roman Catholic Church does not condone same-sex marriage and its priests may not perform them. The United Methodist Church, the largest mainline Protestant denomination, does not embrace same-sex marriage, and neither do many evangelical groups.

But none of those groups has gone so far as to have a formalized policy targeting children of gay couples. While local Catholic officials have fired teachers and other church employees in same-sex marriages, Pope Francis has called for recognizing the “gifts” of LGBT Catholics. And while a majority of evangelicals reject gay marriage, a growing minority supports LGBT rights.

There were indications the LDS church was on a similar path.  In 2012, it established the website Mormons and Gays and officially rejected the idea that same-sex attraction is a choice. Multiple church officials made statements interpreted as supportive of LGBT Mormons, and last month, Dallin Oaks, a high-ranking LDS church official, said Kentucky county clerk Kim Davis was wrong to use her Christian faith as a reason to refuse to issue marriage licenses to gay couples.

The new policy has brought a feeling of whiplash, said Randall Thacker, president of Affirmation, a support and advocacy group for LGBT Mormons and their families.

“Their credibility is lost,” Thacker said of church officials. “There is a feeling in the LGBT Mormon community that they can’t trust their leaders. They hear (church) elders say everybody is welcome here and we love diversity and the next thing you know the same people are proposing things that exclude us. It is, like, what can I trust?”

Why would the LDS church, which has come so far to now be considered part of the American religious mainstream, take such a seemingly radical step?

Quinn says it’s because of the historical Mormon notion of being “a people apart.”

“There is a tribal sense of who Mormons are and what their identity is,” said Quinn, whose own homosexuality led to his excommunication. “Same-sex marriage is a dividing point that the church cannot allow. This is boundary maintenance.”

While the new policy shocked and angered many Mormons, it has some precedence within the church. In the late 1970s, as the church expanded across sub-Saharan Africa, where polygamy is legal, it required that men who wished to join the church dissolve their extra marriages. Quinn, who has studied Mormonism and polygamy, said whole families were sundered, legal wives were shamed and legitimate children were abandoned.

Another reason for the same-sex guidelines is the view of marriage in the LDS theology. Mormons believe they are children of heavenly parents and that only by being married to a member of the opposite sex can they become like their Heavenly Father and Heavenly Mother and be eternally exalted. Mormon scripture states, “If a man marry a wife by my word, which is my law … then shall they be gods.” 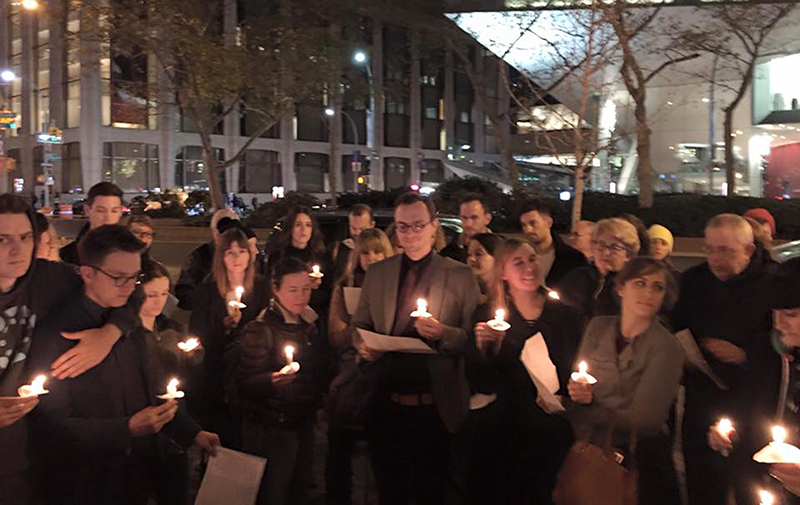 Members of Affirmation gather during a candlelight vigil held across the street from the New York City LDS Temple. Photo courtesy of Affirmation

Thacker, of the Affirmation group, said he has heard numerous Mormons — both LGBT and heterosexual — say they already have or will leave the church over the new policy. He said some will join the Community of Christ, a group formerly known as the Reorganized Church of Jesus Christ of Latter Day Saints that split with the main church in the 19th century. It approves gay marriage and ordains LGBT persons.

Thacker and other Affirmation leaders have been holding fasts, candlelight vigils and call-ins with therapists in response to the new policy. But he’s not ready to leave the church.

“I’m going to be patient with myself and with others as I figure out what feels right for me,” he said. “My DNA is Mormon and I’m not afraid of what can happen to me at church.”

But, he added, “I think it would be really difficult for me to take any future children of mine to church if they will be excluded from full fellowship.”