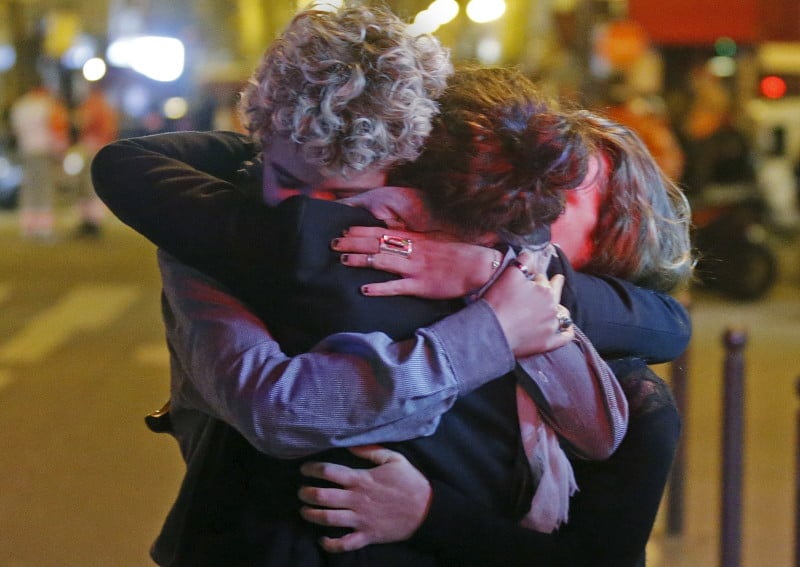 People hug on the street near the Bataclan concert hall after the fatal attacks in Paris. Gunmen and bombers attacked multiple locations around the city on Friday evening (Nov. 13, 2015), killing scores of people in what a shaken French president described as an unprecedented terrorist attack. Photo courtesy of REUTERS/Christian Hartmann

VATICAN CITY (RNS) Pope Francis raised the specter of a World War III “in pieces,” Muslims issued statements of condemnation, while evangelical Christians in America debated whether to speak of a “war with Islam.”

These were some of the responses by religious leaders around the world on Saturday (Nov. 14) to the series of attacks overnight in Paris, which left more than 120 people dead.

“This is not human,” Francis said in a phone call to an Italian Catholic television station. Asked by the interviewer if it was part of a “Third World War in pieces,” he responded: “This is a piece. There is no justification for such things.”

Earlier, the Vatican’s chief spokesman, the Rev. Federico Lombardi, released a statement saying: “This is an attack on peace for all humanity, and it requires a decisive, supportive response on the part of all of us as we counter the spread of homicidal hatred in all of its forms.”

On Saturday morning, French President Francois Hollande said the attacks were an “act of war” carried out by the group that calls itself the Islamic State. Its propaganda arm took responsibility in statements in various languages, claiming revenge for French participation in U.S.-led military operations against its fighters in Syria and Iraq.

Witnesses had reported hearing the cry “Allahu Akbar” from gunmen, and supporters of the group cheered on social media, while many other Muslims condemned the bloodshed.

In Ireland, the imam of the Al-Mustafa Islamic Centre in Dublin said his thoughts and prayers are with the people of Paris “and every other place on earth plagued by sick men with weapons and bombs.”

“Terrorists have no religion whatsoever,” said the Muslim leader, Umar Al-Qadri. “Their religion is intolerance hatred for peace.”

Shuja Shafi, secretary-general of the Muslim Council of Britain, said: “This attack is being claimed by the group calling themselves ‘Islamic State.’ There is nothing Islamic about such people and their actions are evil, and outside the boundaries set by our faith.”

In the United States, the reactions varied, including among evangelical Christians.

Franklin Graham, son of the preacher Billy Graham, said: “Islam is at war with us.”

“As we pray for France we also need to pray for wisdom for the world’s leaders & that Islam will be stopped in its tracks,” he tweeted.

As we pray for France we also need to pray for wisdom for the world’s leaders & that Islam will be stopped in its tracks. #PrayForParis

However, evangelical author Ed Stetzer criticized the call for “war with Islam.”

“I want to see Muslims come to Christ (as, yes, they want to win me to Islam). And, we can’t do that by going to war with a billion people,” he wrote in Christianity Today.

Among mainline Protestants, the presiding bishop of the Episcopal Church, Michael Curry, called upon “all Episcopalians and people of goodwill and faith to pray for those who have died.”

Iran’s president, Hassan Rouhani, canceled a meeting with the pope at the Holy See, as well as the rest of his European trip, which was to have included a visit to Paris.

Rouhani had been due to arrive in Rome on Saturday for meetings with the pontiff and the Italian prime minister, Matteo Renzi.

The Iranian leader called the attacks “crimes against humanity.”

Multiple terrorist attacks in the French capital targeted civilians at a concert hall, restaurants and a sports stadium, where Hollande was present. Seven of the attackers also died.