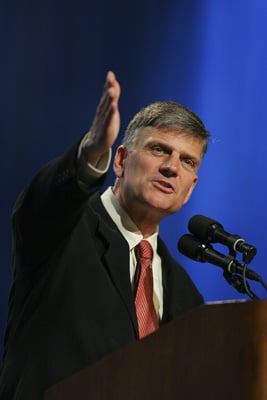 Evangelist Franklin Graham preaches during a crusade in Mobile, Ala., in 2006. Religion News Service photo by John David Mercer/The Press-Register in Mobile, Ala.

(RNS) American evangelical leaders are at odds over whether the best response to the bloody terrorist attacks in Paris is a war on terrorism and militant Islamic ideology, or Christian reconciliation and pacifism.

French President Francois Hollande’s description of the attacks Friday (Nov. 13) that killed 129 people and injured 415 as “an act of war” resonated among some evangelicals.

“We are in a war. An unconventional war, of course, but a war nonetheless,” Trevin Wax of The Gospel Project wrote in an online commentary. “When future generations look back in time, let us hope they will see that we met these challenges with courage, not fear.”

Franklin Graham, head of Samaritan’s Purse and son of the famed preacher Billy Graham, wrote on Twitter: “Islam is at war with us – we’ve witnessed its evil face firsthand over and over.”

READ: 4 ways ISIS grounds its actions in religion, and why it should matter (COMMENTARY)

But some evangelicals rejected the “war against Islam” paradigm.

“I want to see Muslims come to Christ (as, yes, they want to win me to Islam). And, we can’t do that by going to war with a billion people,” researcher Ed Stetzer wrote in Christianity Today.

Some evangelicals engaged in ministry in the Middle East called for a different emphasis.

“We need to be more radical than ever fighting for peace,” said Andrew White, author of “The Vicar of Baghdad” and president of the Foundation for Relief and Reconciliation in the Middle East. His goddaughter was in Paris for the weekend, staying not far from one of the attack sites. (She was uninjured.) White, who is meeting with evangelical leaders on the West Coast, said the Paris attacks should not distract attention from the tragedy occurring in the Middle East. White was pastor of St. George’s, Baghdad, a post he left in November 2014 due to security concerns. His foundation is based in the U.K.

“We obviously heard about the terrible attacks in Lebanon and Paris, but the huge attack on Baghdad never even got mentioned and over 20 people were killed,” he said.

Chris Seiple of the Institute for Global Engagement, who has been in northern Iraq multiple times this year, said thousands of American military personnel should be part of a Sunni-led rapid reaction force that would help to establish a safe haven in the Nineveh Plains, northwestern Iraq, for Christians and other beleaguered religious groups.

“Such a safe haven would not only protect minorities (among which are Sunni), stemming the refugee flow, the safe haven would (also) delegitimize the (theological) identity of ISIS, which attracts global wannabes through its military success pursuant a territory-based caliphate,” he said.

Seiple said bombing militant strongholds is not a solution in itself.

“The role for Christians is pray for and insist on shrewd and judicial and discreet use of military force, whose action must lead toward a post-conflict situation where the mutually reinforcing elements of soft power — return of refugees, internally displaced people, trauma care and education — can take place.”

Other evangelicals oppose military action in favor of reconciliation. 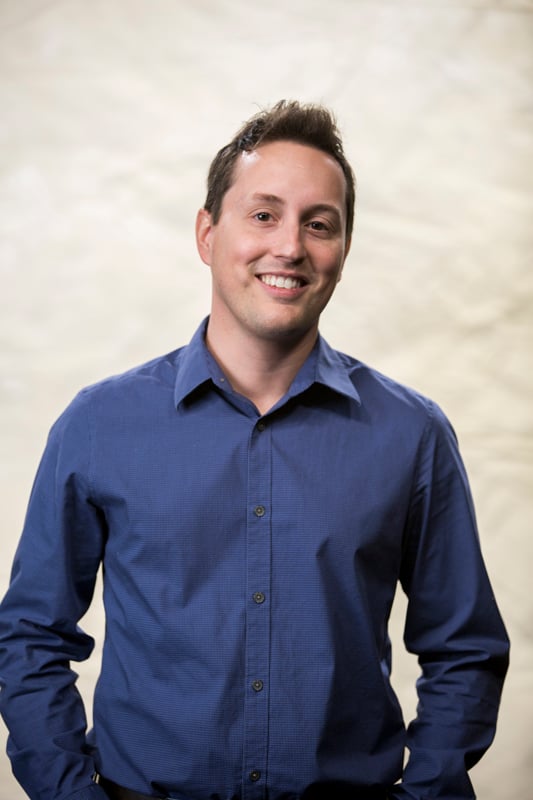 “The allied bombing campaigns have had devastating effects on civilian populations, who are viewed as collateral damage, while only further motivating ISIS and terrorist recruitment,” said Mae Elise Cannon, an author and former Willow Creek Church staff member who recently completed a Pilgrimage to Peace with Israeli and Palestinian peace activists.

She said Christians should offer support by investing in local refugee aid organizations, “rather than further exasperating the great needs by a militaristic response that is ineffectively addressing the problem.”

And she said it is important to seek out moderate Muslims in the United States and the Middle East for mutual reconciliation.

“As Christ followers, we absolutely should be bold and courageous in our speaking of truth, but we also should pursue a sacrificial love that will compel others to want to follow the Lord of the universe,” she said.