Recently, my older sister and her son moved out of our basement and into their own home. She had spent a year with us following a difficult divorce after 30 years of marriage. She needed the time and space to figure out who she was again, find a job that could support her and her son (who is diabetic and has pretty high medical expenses), and deal with some mental health issues.

We had told her we were willing to take her in for three years, but she ended up only staying one. She had found a part-time job that allowed her to work at home four out of five days a week and still paid enough for her expenses. Her mood and mental health were much, much better, and things are looking good for both her and her son.

What does any of this have to do with Mormonism?

My sister had asked our family to be ready to help her move on a Saturday from noon to 2:00, but she hadn’t thought about calling anyone else to help. She had rented a truck and had spent the whole week making sure that she had time to box up her things. On Friday morning, a couple of women from the ward were helping her box and label things so that it would be obvious which room they went to on the other end, and how heavy they were, so that they could be put in the truck in the proper order. These women had simply volunteered to help; they weren’t assigned to be her visiting teachers. They came because someone needed them and because they believed that God would have wanted them to help.

Saturday morning, I called my sister’s home teacher, whom she had been reluctant to contact because he was receiving treatment for cancer. He had asked me several times at church if there was more he could do to help. He had had difficulty getting in touch with my sister because she was gone every other weekend due to custody issues, and also because, as it turned out, he didn’t have her cell phone number. He came and rounded up three other high priests to help load. My husband called the Elders Quorum president, and got another three men to help.

At exactly 12:00, the first Mormon mover arrived and was astonished to see how much my sister and the Relief Society sisters had already accomplished. It took only one hour with all these people to help to get everything into the truck. My husband, who suffers from a ruptured disk and scoliosis, was relieved not to have to do all the heavy lifting himself. We did have one injury from a pinched finger with the dolly use (The Elders Quorum President nearly fainted, but didn’t end up in the hospital). 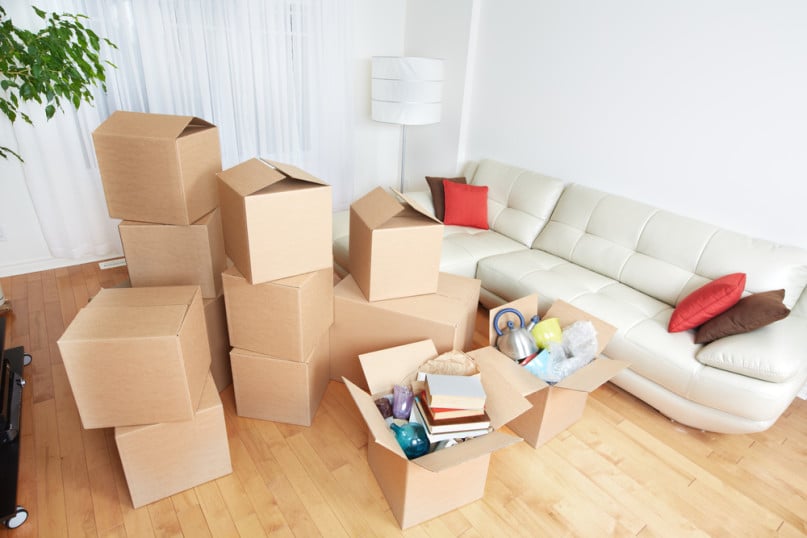 Watching and participating in this event was one of the most spiritual moments in my life. I felt on the edge of tears in the simple act of carrying boxes up the stairs. We had moved into this ward ourselves eleven years previously, and some of the same people were here, helping my sister move out. It was an act of service, but it also felt like a kind of ceremony, a rite of passage, moving from dependence to independence.

I thought of the temple and of crossing through the veil, and this felt very similar to me in so many ways. Here were men helping women, offering a hand even if we were not well known to each other. I thought of Christ’s sermon to his apostles about feeding the hungry, clothing the naked, and visiting the sick and the imprisoned. Those who served my sister were surely serving Christ in her place.

Why do Mormons do this? It seems a strange way of distinguishing ourselves as a religion, this helping people to move in and out.

Though most often Mormons help other Mormons, it is not exclusive. I’ve seen my husband hurry over to help neighbors who have pulled up with a moving van, whether they were Mormon or not. And though it is more traditional for women to help by bringing over a hot meal and a Mormon sweet treat, women also help pack, load, and unpack. Yes, there are times when things are accidentally broken in transit, when someone is injured, and when there are hour-long discussions of how a couch is going to fit through a door.

But this is service in its raw form. We offer our backs to those who have done little more than ask for help. We offer time and we show love. It should always feel sacred. I am just glad I felt the sacred nature of this mundane task that day.

OTHER GUEST POSTS BY METTE HARRISON:

Mette Ivie Harrison, a monthly guest here at Flunking Sainthood, is a novelist whose whodunit The Bishop’s Wife has earned rave reviews since it was released late last year. She has a PhD from Princeton University and is a nationally ranked triathlete.
Share
Tweet
Share