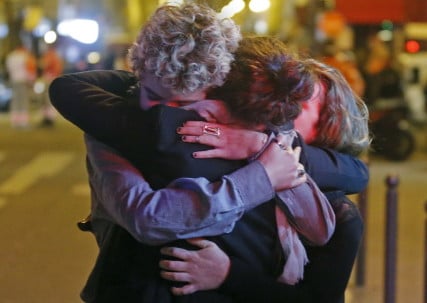 People hug on the street near the Bataclan concert hall following fatal attacks in Paris, France, November 14, 2015. Gunmen and bombers attacked busy restaurants, bars and a concert hall at locations around Paris on Friday evening, killing dozens of people in what a shaken French President described as an unprecedented terrorist attack. REUTERS/Christian Hartmann – RTS6X48

My pen was quiet for the last two weeks, as I was lecturing in western Europe. My path took me to Paris — just 36 hours before the horrific terror attacks, my wife and I were in that grand old city, which seemed (at the time) sunny, happy, and brimming with life. I join with so many others in deploring the unspeakably evil attacks and grieving the terrible losses inflicted there.

It is sadly inevitable that continual acts of killing by those acting in the name of their sick version of Islam ultimately would hurt the public reputation of the religion as a whole. Social media was already awash with inflammatory comments regarding the purported fatal flaws of Islam before the attacks, and these are, of course, only intensifying now. Reporting from France suggests the mood there toward its Muslim citizens is darkening. We are seeing signs of a similar phenomenon in the United States, abetted by presidential politics.

READ: “After attacks, Muslims in Paris fear being targeted anew”

As a Christian scholar and minister, I have made it a practice not to point fingers at supposed problems in other religious communities but instead have focused on helping my fellow Christians practice our own faith better. It has always seemed to me the responsibility of religious leaders to put their own house in order, which gives us plenty to do.

One further reason for this hesitancy is that grand old world religions like the three Abrahamic faiths are highly complex organic realities. Very, very few people from outside a religious tradition really understand the dynamics of that tradition well, with the possible exception of professional scholars who make a lifetime study of a religion.

This is one reason why it is sadly amusing to hear Christians pontificate online about what they think they understand about the inner reality of Islam. On what basis have they suddenly gained this expertise?

Traveling in western Europe, and looking at that continent as a Christian with some historical sensitivity, it is hard not to be reminded that Christians also have killed in God’s name. To visit the grand old Christian cathedrals of Europe is to be reminded of the close alliance between church and state for centuries in waging all kinds of wars in the name of Christ and Christendom. Just look up at the stained glass windows integrating cross, sword, and crown. These wars claimed the lives of Muslims, Jews, and fellow Christians.

Or go to the Anne Frank House in Amsterdam, which is right next door to the grand old Westerkerk. This lovely church’s bells chimed the hour while Anne and her desperate family were hiding out from baptized Christians who were trying to catch and kill them. Anne wrote about those bells in her diary. But they didn’t save her when Dutch and German policemen took her and her family away and sent them off to death.

My dissertation was on Christians who rescued Jews during the Holocaust, and the basic finding is that there were precious few of them. Jews were murdered in Christian Europe — after 1600 years of being a marginalized, often persecuted minority — largely to the deafening sound of Christian apathy and indifference and sometimes with explicit and religiously grounded Christian support. Today the casual visitor to Europe would never know that for centuries it was the largest Jewish population center in the world. Jews certainly remember.

My own reading of at least northern hemisphere Christianity is that its violent potentialities have largely been tamed, for complex historical reasons partly involving the Enlightenment, secularization, and the birth of liberal democracy. But Christian violence can resurface in just the right (wrong) historical circumstances, as when in the early 1990s extremist Christians in the US started attacking abortion clinics and killing those who worked there.

So the problem is not an abstraction called “Islam.” And it’s not “Christianity.” It’s human nature. But leaders in these and all religious communities do have a sacred responsibility. They must teach versions of their religion that produce believers who will love rather than murder their neighbors.

I welcome your thoughtful comments on this article. You an also find me on Twitter and Facebook.