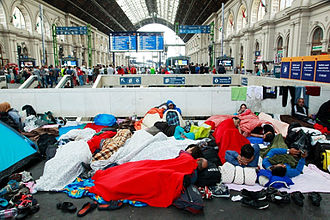 I woke up this morning, made myself a cup of coffee, and opened my New York Times to discover that a family of three Syrian refugees due to arrive in the U.S. Friday has been redirected from Indiana to Connecticut. The reason is that Indiana Gov. Mike Pence says he will no longer accept Syrian refugees in his state. My governor, Dannel Malloy, feels otherwise.

Actually, Pence and his fellow Republican governors have no authority to refuse to accept refugees admitted by the federal government. But they can make life harder for them. “My role is to create a welcoming environment here in our state that gives a safe haven to refugees,” Carleen Miller, executive director of Exodus Refugee Immigration in Indianapolis, told the Times. “That we can’t be that because our state is not welcoming all is really painful.”

Whither the GOP governors have gone, there likewise the GOP presidential aspirants. Every last one of them has assumed the position, though one can detect differences of posture.

Donald Trump would deport Syrians in the county now and close mosques. Chris Christie would keep out orphans. Jeb Bush and Ted Cruz would let in only Christians. Rick Santorum wouldn’t let in Christians because that would help ISIS rid the Middle East of them. Ben Carson would cut off federal funding.  John Kasich wants President Obama to suspend the program. Carly Fiorina stands with the governors.

I suppose I should be more sympathetic to Republican statesmen cowering at the thought of allowing a few heavily vetted Syrians into the Land of the Free and the Home of the Brave. When it was birthed in the 1850s, the GOP absorbed the anti-immigrant Know-Nothing Party, and it’s never managed to rid itself of that nativist gene.

On the other hand, leaders of the country’s two largest Christian communities, the U.S. Conference of Catholic Bishops and the National Association of Evangelicals, yesterday came out against excluding the Syrian refugees. Church World Service, which represents mainline Protestants, has done the same, as has the Religious Action Center of Reform Judaism and the ADL.

In recent years, Republicans have made a big show of standing up for religious values. But when push comes to shove, they could care less.