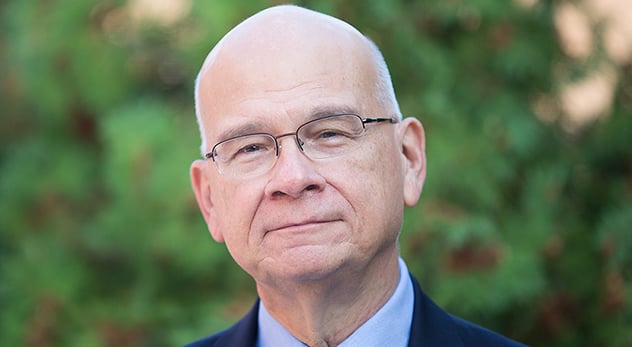 The New York Times best-selling author finds Jesus in book compiled centuries before Christ’s birth. “There are two ways to read the Bible,” Keller says. “The one way to read the Bible is that it’s basically about you. … Or you can read it as all about Jesus.” – Image credit: Andrew Chan

Jesus of Nazareth is explicitly mentioned in fewer than half of the 66 books in the Protestant Bible, Tim Keller sees Jesus in all of them. “There are two ways to read the Bible,” the New York Times best-selling author and prominent pastor of New York City’s Redeemer Presbyterian says. “The one way to read the Bible is that it’s basically about you. … Or you can read it as all about Jesus.” It’s somewhat unsurprising then, given Keller’s perspective, that he would see Jesus throughout the Psalms, an Old Testament book compiled centuries before Christ’s birth.

What is remarkable is how Keller sees Jesus showing up there and why. In “The Songs of Jesus,” Tim Keller and his wife, Kathy, offer a 365-day Jesus-centered devotional from the book of Psalms. Here we discuss what they believe we can learn about Jesus in this ancient book of poetry.

RNS: Christians believe the Psalms are songs and poems written by the Hebrew king David and others. But your book on the Psalms is called “The Songs of Jesus.” Why?

TK: David wrote fewer than half of the Psalms. They were written by a host of different authors. But they can be rightly called the “Songs of Jesus” because they were songs Jesus sang since the Psalter was the Jewish hymnbook. And also they are songs that point to Jesus, as he himself believed. For example, he taught that he was the priest-king of Psalm 110, the cornerstone of Psalm 118, and the sufferer of Psalm 22.

RNS: Your book’s promotional materials say, “Jesus knew all 150 Psalms intimately.” Is this true and does the Bible say this?

TK: That is publicist’s copy, but it is probably true. As the hymnbook of ancient Jews, Jesus would have sung them all many times growing up and would have been as familiar with all the psalms as you would be if you had sung from a hymn book of 150 songs all your life. Also Jesus quoted from the Psalms more than from any other Old Testament book of the Bible. He quoted from it even as he was dying on the cross in agony.  That is evidence of intimate knowledge.

RNS: Jesus spoke of forgiveness and kindness and love, yet various Psalms actually request that God kill people, destroy enemies, or help the writer get revenge. How do you reconcile the message of the Psalms with the message of Jesus in those places where they seem to conflict?

TK: The psalms you are referring to are cries for justice against oppression and evil.  They are calls for God to right wrongs. Modern readers should not recoil too quickly from these prayers. We should want our God to be a God of justice. In many parts of the world today people are facing persecution, genocide, and displacement. We in the West often lead relatively comfortable and safe lives, and through these psalms we can become connected and sympathetic to people we would otherwise ignore.

Also, if these psalms are read closely, you will see that the psalmist does not say “help me smite them” but leaves retribution to God, which fits with Romans 12:19, which says, “’It is mine to avenge; I will repay’ says the Lord.” So in this too the Psalms are models for us today. [tweetable]We are to not to repay or take things into our own hands, but leave our case with God.[/tweetable]

Lastly, I would add that, yes, Christians do have resources for forgiveness that the psalmists did not have. We live on the other side of the cross of Jesus Christ. We know more clearly that all of us deserve God’s punishment for our sin—that we are all God’s enemies–but that Christ came and took our punishment in our stead.  This gives us both the humility and the hope not merely to refrain from revenge, but to forgive and pray for our enemies as well.

RNS: You interpret the Bible in a “Christo-centric” way, which is to say, you look for and see Jesus in all the Scriptures. But some might say that this approach runs the risk of forcing something into the mind and mouths of ancient writers who knew nothing of Jesus. How do you respond?

Second, as I noted before, Jesus himself said numerous times that various psalms were referring to him.  Christians follow Jesus’ teaching—if he read the Psalms in a “Christological” way, then so do we. Tremper Longman, in the introduction of his Tyndale Old Testament commentary on Psalms makes a good case for reading the psalms in this way.

RNS: Where do you find the Christian “gospel”–as the New Testament might explain it–in the Psalms?

TK: The gospel is, according to Titus 3:5, that God “saved us, not on the basis of deeds which we have done in righteousness, but according to his mercy…” Human religions teach that we achieve or maintain spiritual life or salvation by our “deeds done in righteousness.” The Biblical message is that, on the contrary, salvation comes wholly from God, only by his grace. It is not self-accomplished or based on our moral efforts.

This is stated not only in the New Testament but also in the Old–in places like Jonah 2:9 and Isaiah 53:5-6–and throughout the Psalter. For example, Psalm 62:1-2 says, “My soul waits in silence for God only. From Him is my salvation. He only is my rock and my salvation.” Of course the New Testament gives us more details—it explains how God can save us by grace through Christ and the cross. But the gospel of salvation through God alone and grace alone is in the Old Testament and the Psalms as well.

RNS: What do you think we learn about Jesus from the Psalms that we might not otherwise know from the New Testament?

The Psalms, for example, are filled with the prayers, struggles, and actions of King David. By remembering that Jesus is the ultimate David and ultimate king, we learn much about Jesus. Also the Psalms are filled with lamentations—ardent, articulate prayers of the suffering. Since Jesus himself used the laments to express is sorrow, we can read the lament psalms and get a window into his heart and into his pain and grief.